Sold for $269,500 at 2012 RM-Automobiles of Arizona.
Sold for $319,000 at 2015 RM Sotheby's Hershey Auction.
Sold for $274,400 at 2018 RM Sothebys : Monterey.
In 1908, Hermann A. Brunn established his own company at Buffalo, New York. He had apprenticed with his uncle in the carriage trade and his new company was intended to use that skill in constructing automobile bodies. The early examples were one-off's built atop of prestigious chassis. Their first automaker customer was Lincoln; Hermann Brunn had been introduced to Henry Leland by a friend. Before long, Brunn was producing 20 bodies a month with most being sent to Lincoln. Brunn would stay in business until 1941, making them one of the longest running of their craft. Judkins was tasked with creating the coupes and berlines, Willoughby the limousine bodies, and LeBaron the convertible sedans. Brunn bodied the town cars and convertibles. Lincoln's new V12 engine introduced in 1932 meant the bodies could become larger and more refined, as the 150 horsepower was more than adequate to carry the stately bodies. The engine would be the last of the Henry Leland era to use the fork-and-blade connecting rods. The L-head unit had a 65-degree angle and displaced 447.9 cubic-inches.
Lincoln had four cars constructed for the 1932 show circuit. Brunn bodied a Double Entry Sport sedan and this Double Windshield Phaeton; Rollston created a Seven-Passenger Town Car and LeBaron created a Town Cabriolet. This car, with chassis number KB1367, has two raked windshields which gives it a very low roofline.
After the show circuit the car was sold to a Long Beach, California resident on June 7th of 1932. The current owner has treated this car to a complete restoration. Part of the reconstruction work of needed parts was handled by Hermann C. Brunn, son of the Brunn & Company founder. Herman apprenticed with Kellner in Paris and later worked for his father until joining Ford Motor Company when the family firm closed. The original blueprints for the car were used during the restoration. Upon completion in 2003, the car was brought to the Pebble Beach Concours d'Elegance where it won Best in Class for prewar Lincolns and the Most Significant Design award, presented by Ford Motor Company. The car is painted in its original color of Belmont Brown. In 2008 this 1932 Lincoln Model K Dual Windshield Phaeton was brought to the 2008 Automobiles of Amelia presented by RM Auctions where it was estimated to sell for $600,000 - $800,000. Bidding reached $575,000 but was not enough to satisfy the vehicles reserve; the car was left unsold.
By Daniel Vaughan | Apr 2008 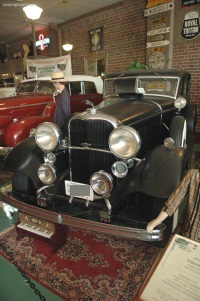