Sold for $2,200,000 at 2008 Automobiles of Amelia Island, RM Auctions.
Sold for $1,196,597 (£756,000) at 2010 RM Auctions - Automobiles of London.
There were only 100 examples of the 8-Liter Bentley's constructed. A mere seventy-eight have survived the challenges of time and are still in existence. 16 are open bodywork, six are drophead coupes and ten are open tourers. There are only twelve open cars that have survived with their original coachwork and this example, with chassis number YR5076, is one of those rare cars. Walter Owen Bentley, more commonly known as W.O. Bentley, was educated at Clifton College in Bristol and worked several jobs before building his first motorized transport - a Quadrant motorcycle. As time progressed so did his motorbikes. As they got better, he entered them in touring events and races; during one such campaign, he was awarded a gold medal for completing the London to Edinburgh trial. In 1909 he competed in the Tourist Trophy but crashed on the first lap.In 1910 he purchased a Riley 9hp car and in 1911 purchased a French Sizaire-naudin. Not satisfied with these vehicles and feeling he could create a better car; he formed a partnership with his bother, Horace Milner Bentley, in March of 1912. He focused heavily on racing in the years to come, competing in hill climbs, endurance races, time trials, and many other events.
During the First World War, W.O. Bentley used his skill in modifying aero engines used by the Royal Naval Air Service. Later, he built aero engines of his own design.
After the war he began work on a new engine which was completed by September of 1919. The four-cylinder unit had a displacement size of 2996cc and developed maximum power at just 3500 rpm. After sufficient testing was performed, a mock-up chassis was created for the Olympia Motor Show in London. It was an impressive machine that received much attention and praise. The 3.0-liter Bentley was later succeeded by 4.5- and 6.5-liter versions. And finally, between 1930 and 1931, the 8-liter was produced. The 8-Liter Bentley's were very impressive machines that were, in respects, an enlarged version of the successful Speed Six models. They had a lowered chassis frame and an 'F' series gearbox. Larger bearings were used to increase strength and reduce engine noise. The top-gear speed range was 3.5:1 and the six-cylinder engine had a bore of 110 mm and a stroke of 140mm. The first 8-Liter Bentley was shown at the Olympia Motor Show in October of 1930. Their appearance and stature was awe-inspiring - but equally as impressive was the vehicles performance. When fitted with a limousine body and carrying eight people, the 8-Liter Bentley's could still race to 100 mph. This was during an era when the 100 mph was nearly untouchable for road-going vehicles. Bentley had a car that could outpace the competition and could rival the most exotic and luxurious car on the market. However, what they were unable to do was avoid the poor economic conditions of the time, nor their poor financial position. By 1931, the Bentley automaker notified London Life they were unable to make their mortgage payment - in other words, they company was broke. The company's assets were purchased by Rolls-Royce which provided sufficient funding for the Bentley marque to continue. The first Rolls-Royce built Bentley was the 3.5-liter which would later become known as the 'The Silent Sports Car.'
Chassis number YR5076 was sent to W.B. Henderson of Somerset, England on January 3rd of 1931. Its first owner was G.R. Wilson and Lt. Col. A.J.A. Beck. In 1953 it was sent to the United States to Leo Pavelle from New York. Ownership later passed to Bill Klein. It passed through several other US owners, and even made an appearance at the 1989 Pebble Beach Concours d'Elegance. In 1995 it returned back to the United Kingdom when it was sold to Richard Procter. By this point in history, it had been driven 43,000 miles since new. While in Mr. Procter's care, the car was treated to a restoration. After completion, ownership passed to Mr. William Connor II in Hong Kong.
In 2008 the car was brought to the Automobiles of Amelia presented by RM Auctions where it was certainly one of the highlights of the event. Its $2.2 million selling price, including buyer's premium, was the second highest of the auction. It is a very rare car and one of the greatest examples of the Bentley pre-Rolls-Royce acquisition.
By Daniel Vaughan | Apr 2008

Sold for $2,200,000 at 2008 Automobiles of Amelia Island, RM Auctions.
Sold for $1,196,597 (£756,000) at 2010 RM Auctions - Automobiles of London.
1300 cc's per Cylinder!The Bentley 8-Litre was an enlarged version of the Speed Six. It had a six-cylinder engine with a bore and stroke of 110 mm by 140 mm respectively, and a top gear speed range of a minimum of 6 mph and a maximum of 104 mph. It had acceleration capability of 10 to 100 mph in 50 seconds with a fully equipped saloon body.Only one hundred 8-Litre Bentleys were built. The car presented here has its original open tourer coachwork. This handsome car has velvet green paintwork with a green leather interior.
The 8-Litre was the last car designed by W.O. Bentley and of the 100 examples built, 78 are still in existence today. Only sixteen 8-Litres were built with open bodywork - six drophead coupes and ten tourers - and only twelve of these open cars survive today with their original coachwork. This is indeed a rare car.
This car was delivered to the original owner in Somerset, England on January 3, 1931. It was shipped to the United States in 1953. In 1995, the car's odometer read only 43,000. The Bentley was restored at that time and was repainted and re-trimmed.
Touring Car by Vanden Plas
Corsica Tourer by Corsica
Chassis#: YX5119
Chassis#: YX5115 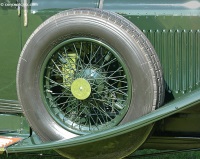 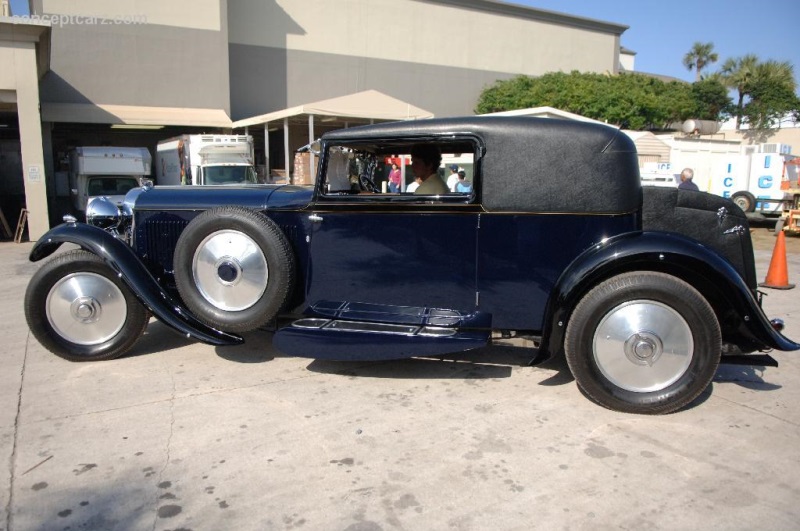 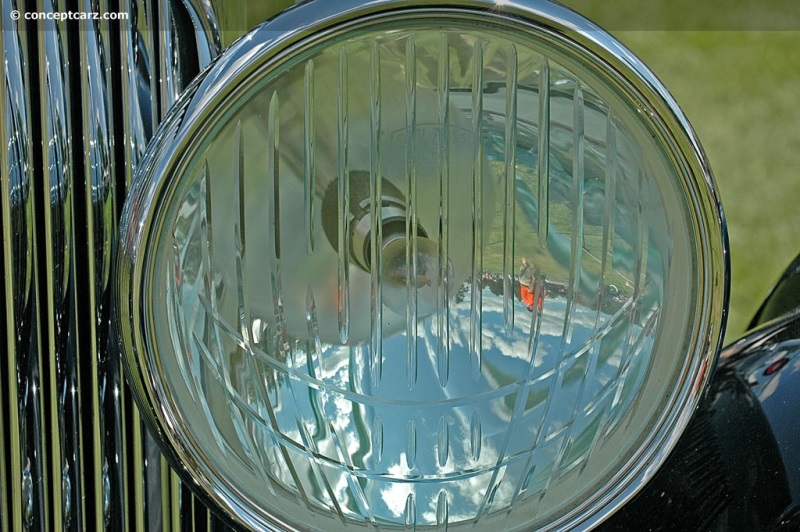 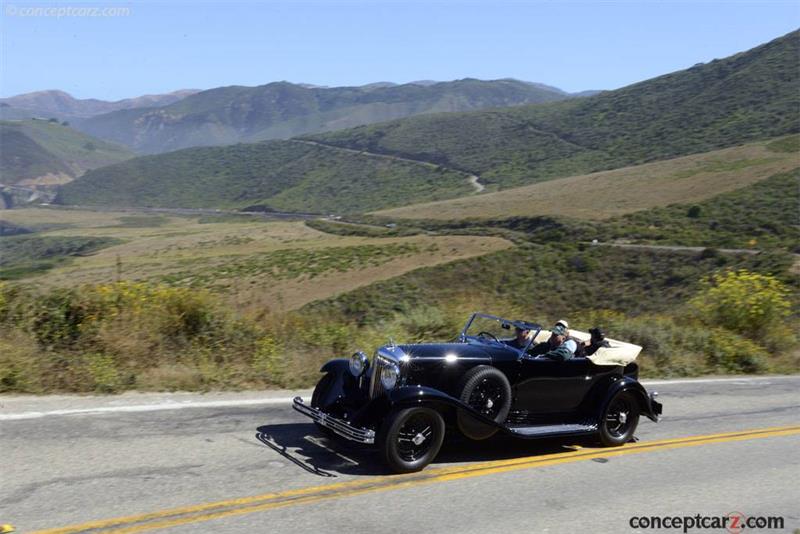 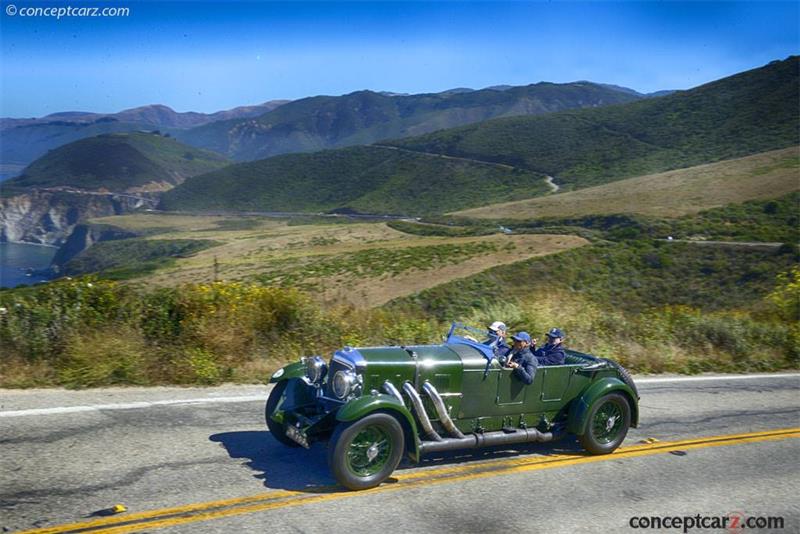 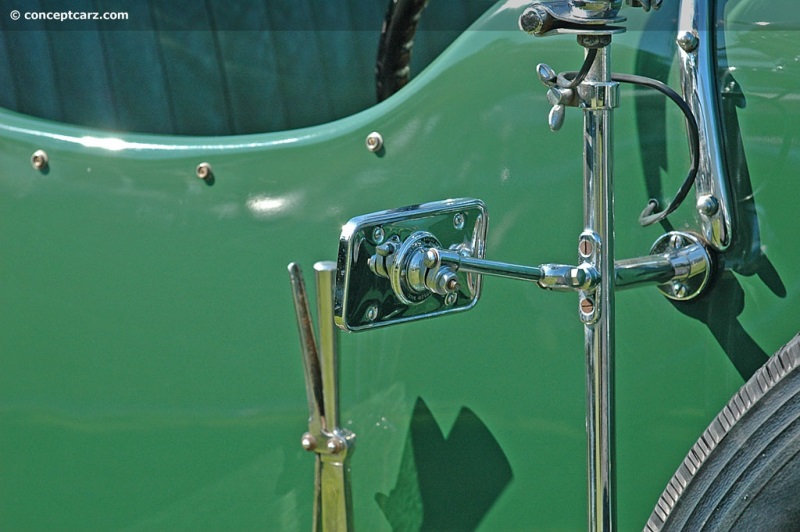 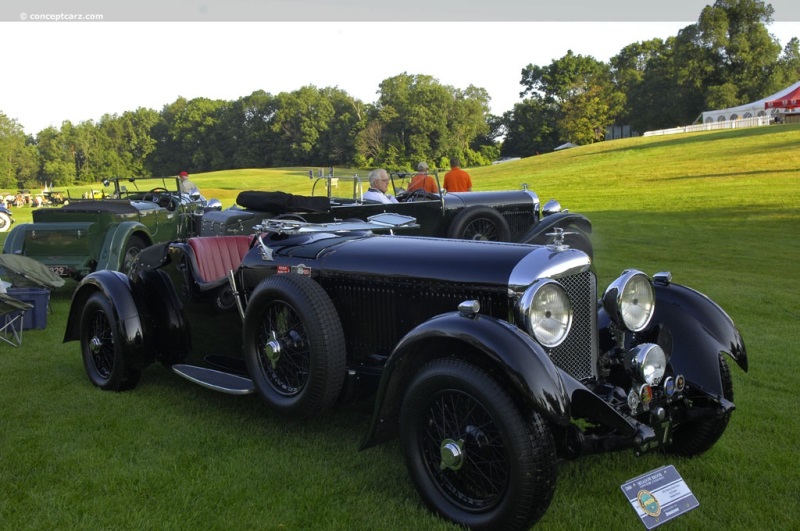 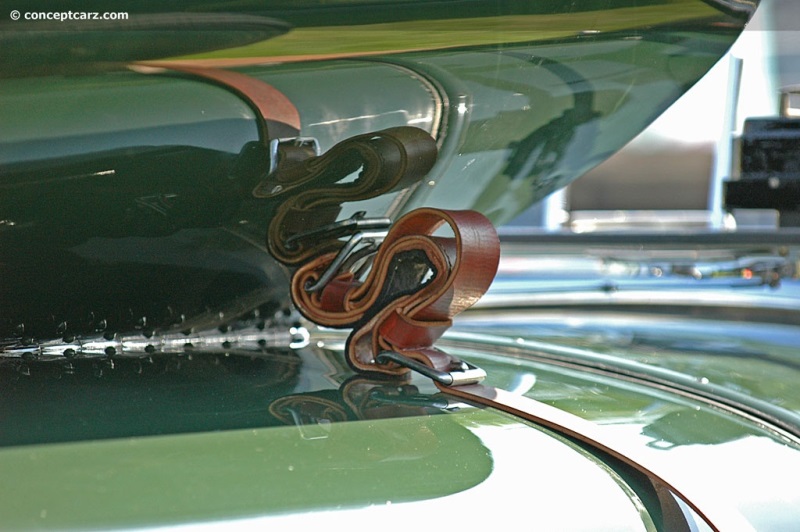 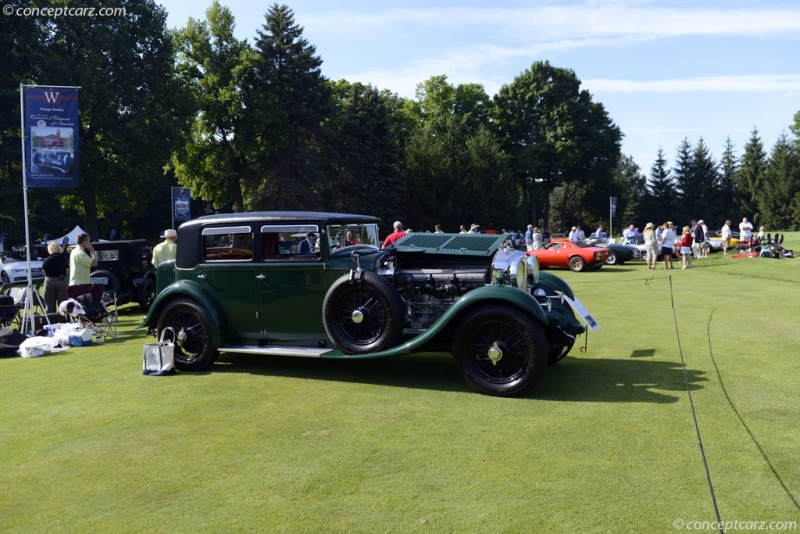 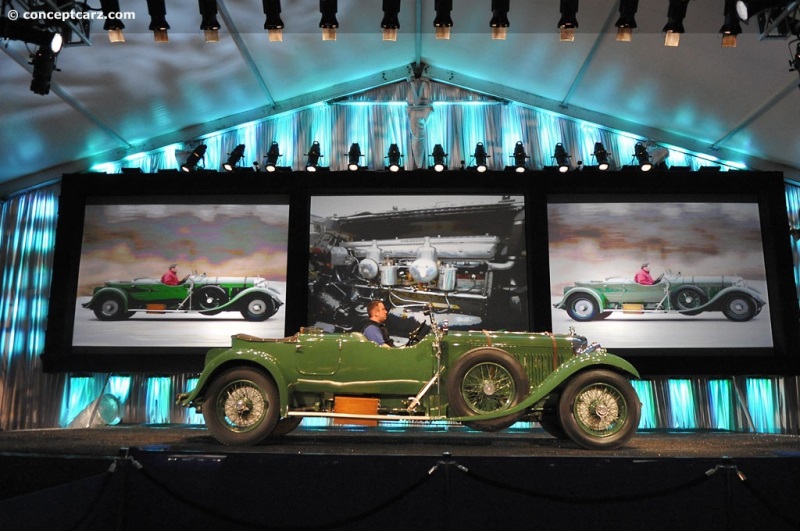 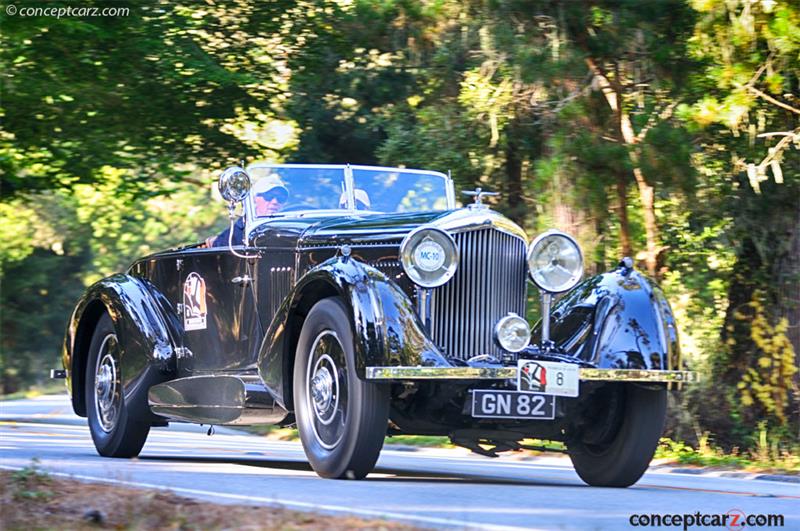 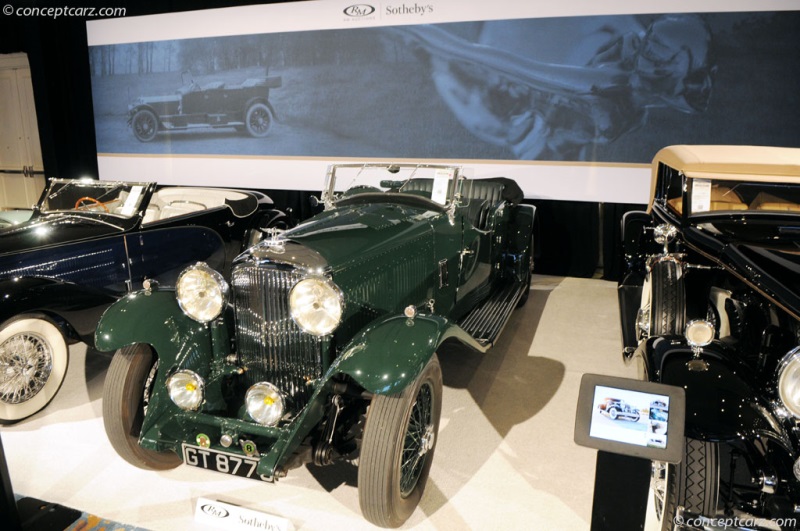 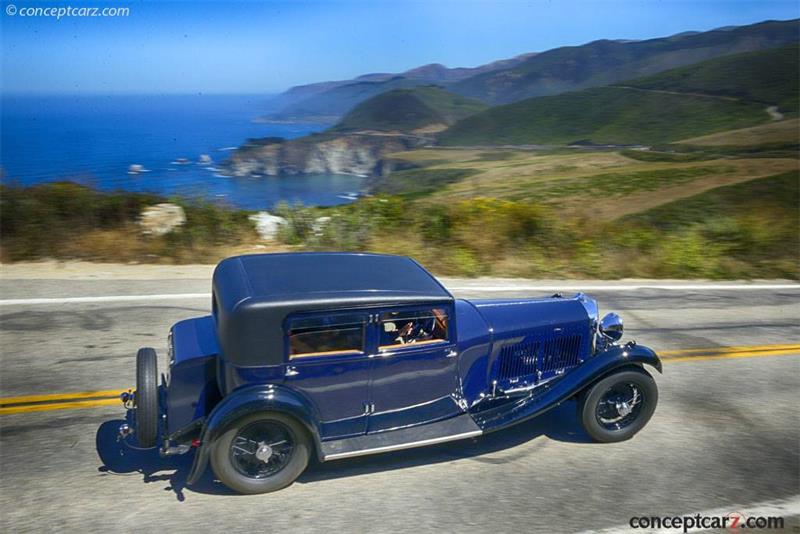 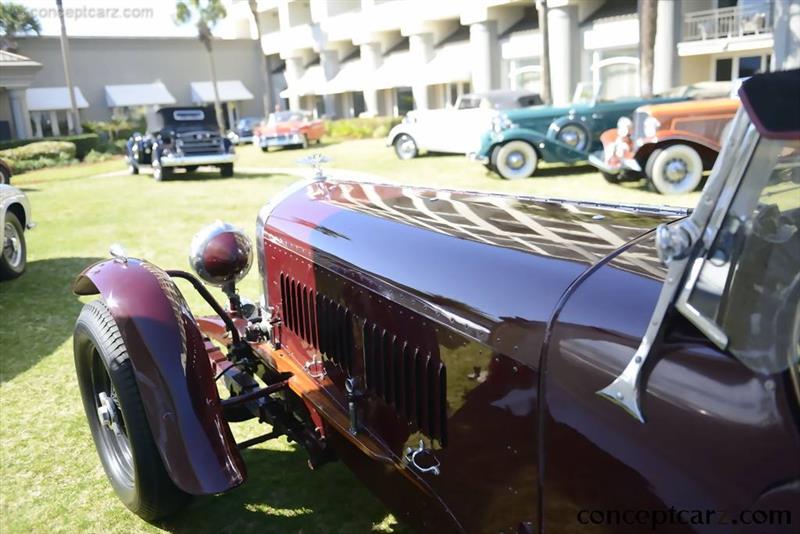 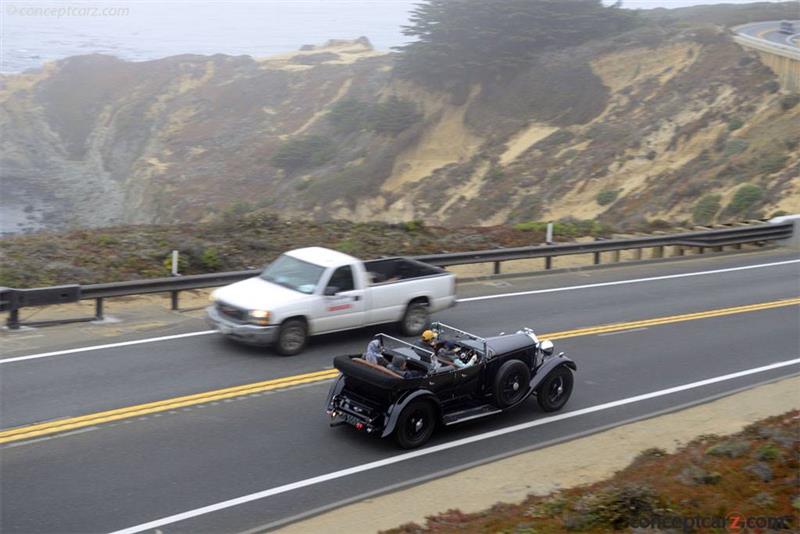 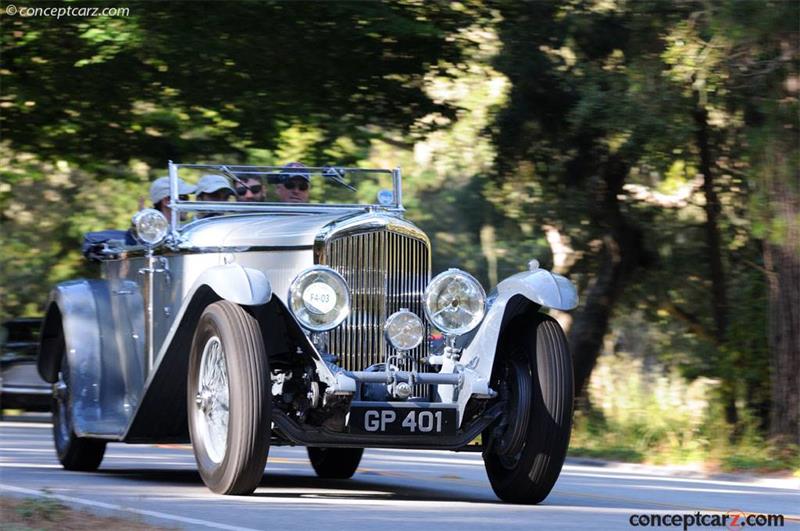