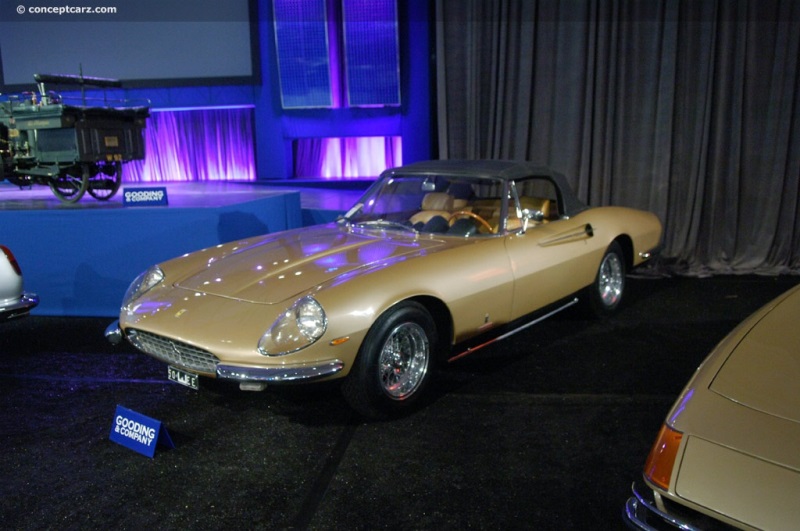 Spyder
Chassis #: 9631
Engine #: 9631
Sold for $825,000 at 2007 Gooding & Company.
Sold for $880,000 at 2010 Gooding and Company - Pebble Beach Auctions.
The Ferrari 365 California was the last of the front-engined V-12 powered luxury convertible in the Prancing Horse stable for a generation. These limited-production, high-performance, front-engined, luxury cars had dynamic and exciting performance with aggressive styling and design inspiration courtesy of the Ferrari 365P and 365P2/3 prototypes. This example is chassis number 9631 with matching engine number. It was selected for display at the Geneva Motor Show in March of 1967 then sent to the United States where it was leased to a doctor. Ownership changed several times throughout the years, until coming into the possession of Sam Alotta in 1976. While in Alotta's care, the car was cosmetically restored. A short time later, while it was parked, it was hit in the rear. The force of the accident sent the front end into a wall, inflicting damage similar to the Kamm tail. To add to the misfortune, the wall fell on the roof. Soon after the damage occurred, Alotta put the car up for sale. The car was purchased by Greg Garrison who sent it back to Italy and commissioned a complete restoration by its original builders at Ferrari and Pininfarina. The restoration work was completed in 1977, and has been apart of the Greg Garrison collection since that time. It has been well maintained, seen little use, and remains in 'stock' condition.
In 2007 this 365 California was brought to the Gooding & Company auction held in Pebble Beach, CA where it was estimated to sell for $700,000-$950,000 and offered without reserve. With only fourteen examples ever created, it is rare to see a 365 California cross the auction block. Each of these vehicles has a well-known history and are highly sought after by collectors. This example was sold for $825,000 including buyer's premium.
By Daniel Vaughan | Aug 2011

1966 Ferrari 365 California's that have appeared at auction but did not sell.