Sold for $330,000 at 2007 Gooding & Company.
Sold for $341,000 at 2011 Automobiles of Arizona by RM Auctions.
With the help and talents of engineers and designers, Gian Paolo Dallara and Gitto Bizzarrini, Ferruccio Lamborghini began a quest to build a GT car that was without fault. At the time, Bizzarrini had been working on a design for a Formula One Engine, which would become the basis for a new Lamborghini power plant. It was a four-cam V12 that displaced 3.5-liters and breathed through six two-barrel downdraft carburetors and had dry-sump lubrication. In its initial form, it offered an impressive 360 horsepower. The engine was absolutely brilliant, and Dallara - who was 24 at the time - was tasked with creating an equally impressive design for the road-going gran turismo. The car was given a chassis comprised of square and round tubing. The body was formed from lightweight aluminum. The result of this endeavor was dubbed the 350 GTV prototype which made its world debut at the Turin Motor Show in 1963. It was hailed as a sophisticated car that possessed the performance of a Ferrari with the refinement of a proper Gran Turismo. The 350GT was later succeeded by the 400GT 2+2 which featured a four-liter version of the V12, and 320 horsepower plus additional torque. Though it was visually similar to the 350GT, it had additional seating which required several modifications to the design. The roof had been raised a little more than two inches and the floorpan was lowered. The rear window shrunk in size and the while the trunk did the opposite.
When the 400GT 2+2 entered production, it was offered with a choice of either the 3.5-liter or four-liter engine. Only a handful of two-seaters were built with the larger engine and these have come to be known as 'Interim' cars. Only 23 such cars were ever built, such as this example. This Ferrari 400GT is chassis number 0526 and engine number 0514. It was built in 1967 and was among the last of the Interim cars. It is painted in silver with red leather interior and was treated to a restoration by Brian Anderson's shop in Oceanside, California.
The current owner has owned this car since 2002, during which it has been well shown and awarded on numerous occasions. In 2007 it was awarded first in class in the Italian Class at the Palos Verdes Concours. In 2007 this very rare car was brought to the Gooding & Company auction held in Pebble Beach, CA where it was estimated to sell for $285,000-$350,000. It was one of the first cars to cross the block of the two-day auction. When the gavel fell for the third and final time, the lot had been sold for the sum of $330,000 including buyer's premium.
By Daniel Vaughan | Apr 2008

1967 Lamborghini 400 GT's that have appeared at auction but did not sell. 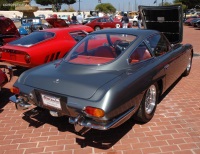 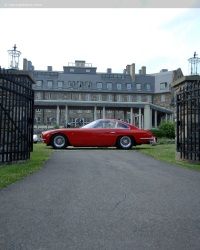