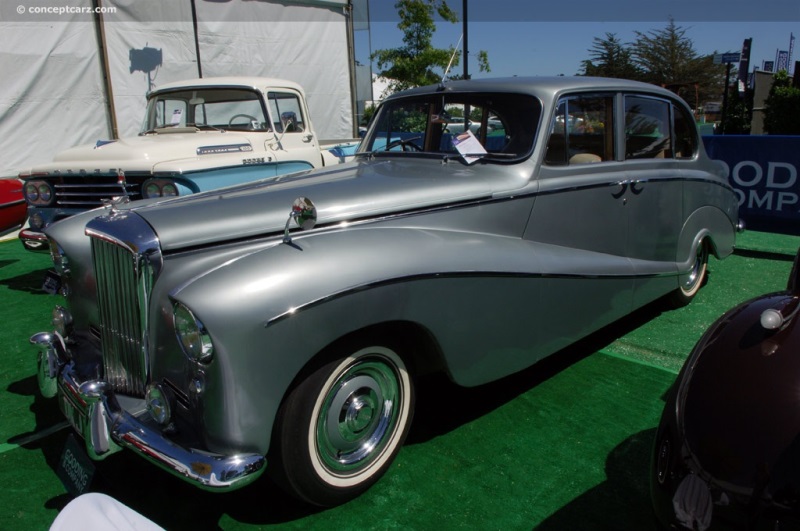 Sports Saloon
Coachwork: Hooper
Chassis #: B460-AN
Engine #: BA 230
Sold for $46,200 at 2007 Gooding & Company.
In the post-World War II era, a new type of marketplace for the elite in society began to evolve; one that had owner, rather than chauffeur, driving the car. A new type of Bentley was needed. In 1946, Bentley introduced the Mark VI which was the first Bentley offered with a standard factory steel body. The Great Depression of the 1930s had depleted the number of independent coachbuilders, so the traditional method for clothing chassis's in the pre-WWWII era, was becoming obsolete. The following year, Rolls-Royce introduced their companion car, the Silver Dawn.There was still a market for custom coachwork, and Bentley made their Mark Vi available as a rolling chassis on which the buyer could commission their own body.
In 1952, Bentley introduced the R-Type which featured a larger 4.5-liter engine and the first automatic transmission. The S-Series followed in 1955 and by this point, the standard steel sedan was nearly identical to the Rolls-Royce counterpart. A few differences existed, such as the grille and badge.
A total of 145 S1 Bentley's were clothed in custom coachwork. The remainders were standard sedans. One of the custom builders was Hooper & Company, based in London and had a history that dated back to 1805. Their existence would continue until 1960 when they ceased production and became a Rolls-Royce distributor.This 1956 Bentley S1 Sports Saloon has Hooper coachwork. It is an aluminum body with is over 80 lbs. lighter than the standard steel sedan. This car features cutaway 'spats' over the rear wheels and a large, open interior with many windows offering a plethora of light to flow through. The interior is leather with eucalyptus wood trim, door sills, map tray, and rear writing tables. This car was built for Lady Janet White of Felixstowe, UK and imported to the US in 1970 by Robert and Rita Irwin. The Irwin's retained the car for nearly four decades, before selling to the current owner. The car is completely original and has been driven 86,000 miles since new. This is one of only four Bentley S1 automobiles with this type of coachwork. In 2007, it was brought to the Gooding & Company Auction held in Pebble Beach, California where it was estimated to sell for $75,000-$100,000. It was offered without reserve, which worked well for the buyer, who purchased the car for $46,200, including buyer's premium.
By Daniel Vaughan | May 2008

1956 Bentley S1's that have appeared at auction but did not sell.