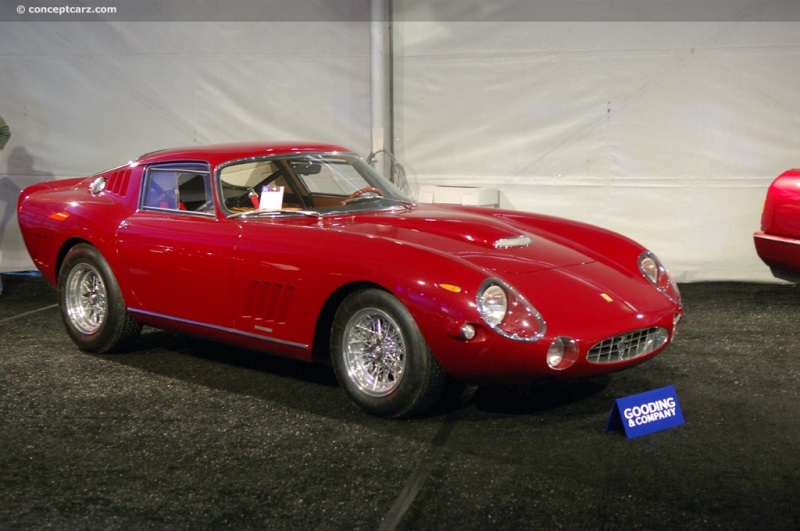 Coupe
Coachwork: Allegretti
Chassis #: 09813
Engine #: 100 148
Sold for $1,155,000 at 2007 Gooding & Company.
In normal guise, the Ferrari 275 GTB was a road-going car, but what is often the case with the prancing horse marque, customers wanted to take it racing. To quench their desire, Ferrari developed the 275 GTB/C with alloy bodywork and a six-carburetor engine. The most success example was chassis number 06885 that Scuderia Ferrari, Ecurie Francorchamps and NART raced in 1965. Among its successes was a first in class in the 1965 24 Hours of LeMans, piloted by Willy Mairesse and 'Beurlys' (Jean Blaton). It was a very unique example that had a GTO styled front-end, three air vent slots in the fenders behind the rear wheels, and large driving lights. The 275 GTB/4 was introduced in 1966. Again, it was not intended for competition. The main differences between the 275 GTB and the 275 GTB/4 was dual overhead camshaft cylinder heads and an increase in horsepower and torque. Ferrari did not make a competition version of the 275 GTB/4, though around 17 of the 280 GTB/4's constructed were clothed in aluminum by Scaglietti.
This Ferrari 275 GTB/4 is chassis number 09813. It was found in early January of 1987 in pieces by Greg Garrison. All that remained were the engine, chassis, tires and four wheels. The car had been in an accident, so the chassis was not in perfect condition. Garrison sent the parts to Italy where a new chassis to the original plans was created by Vaccari, the Ferrari chassis builder. Brandoli in Maranello was tasked with building the body, but it was Carrozzeria Mario Allegretti in Modena who would end up creating the lightweight aluminum coachwork it now wears. The engine, transmission and rear assembly, brakes, and other mechanical components were restored at Sport Auto by Johnny Dena and Albo.
The coachwork is reminiscent of the LeMans class winning 275 GTB/C. It has the GTO-style nose, oval grille, covered driving lights, and an opening at the front of the hood bulge. The side windows are fixed, but have sliding panels to allow ventilation and access. In the rear are three grill vents which allow air to freely flow from the rear wheel wells. There is an exterior fuel filler cap which can be found in the right roof sail panel. The exterior is deep red and the interior is tan and black leather. It is equipped with a roll bar for additional support and safety. In 2007 the car was offered for sale at the Gooding & Company auction held in Pebble Beach, California where it was estimated to sell for $700,000 - $850,000. It was offered without reserve. Those estimates proved too low, as bidding soon excelled over the magic million dollar mark. As the gavel fell for the third and final time, the lot had been sold for $1,155,000 including buyer's premium.
By Daniel Vaughan | May 2008