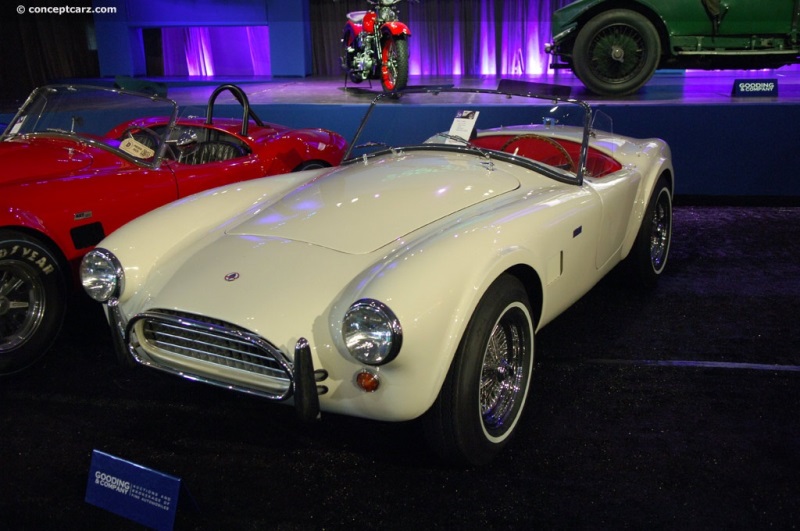 Roadster
Chassis #: CSX2541
Sold for $577,500 at 2007 Gooding & Company.
This A.C. Shelby Cobra with a 289 Cubic-inch V8 engine was completed by Shelby American in October of 1964. It was painted in white with red interior which it still wears today. Holman & Moody transported CSX2541 to Lynch-Davidson Ford in Jacksonville, Florida. It was then delivered to its new owner, Joe LaRose. He retained the car until his death in 1999. The car was a daily driver and never raced, abused or modified. It still retains the Hi-Po 289 engine, 4-speed transmission, Autolite carburetor and cast iron intake manifold. It has a rack-and-pinion steering, Stewart Warner gauges, six-inch wire wheels, side vents, and Ford electrics. Mark Winkleman became the cars next caregiver who gave it a cosmetic restoration.
In 2007 the car was offered for sale at the Gooding & Company auction held in Pebble Beach, California where it was estimated to sell for $550,000 - $650,000. Those estimates proved accurate as the lot was sold for $577,500 including buyer's premium.
The A.C Cobra cars are among the most memorable and recognizable cars in history. Their original designs can be traced back to the Touring bodied Barchetta's that clothed Ferrari's 166 and 225 Spyders. That bodystyle would become highly duplicated throughout the years, with the first being the one-off Cooper-MG raced by automobile dealer Cliff David. John Tojiero had conceived the ladder frame with independent leaf-spring suspension and Eric Hall and Bill Rich had clothed the car in the Barchetta-style body. The one-off was successful in racing, and Davis urged Tojiero to mass-produce the cars. Instead, Tojiero licensed the design to the Hurlock family of A.C. in Thames Dutton. Soon, the two-liter, six-cylinder versions bearing A.C. badges were in production. Dubbed the A.C. Ace, they were an immediate success. A few years later, a Bristol engine became available which improved the vehicles performance. In the early 1960s, Bristol announced it would discontinue its engine. A Chevrolet V8 unit served as a replacement, and later a 2.6-liter Ford six provided ample power to excite drivers and on-lookers. A long-term solution was found when Texan-based Carroll Shelby dropped a lightweight Ford V8 engine into the engine bay and took it racing. The 260 cid, then 289 cid, and finally the 427 version made the Cobra legendary.
By Daniel Vaughan | May 2008

1964 Shelby Cobra 289's that have appeared at auction but did not sell.