High bid of $550,000 at 2005 Vintage Motor Cars in Arizona. (did not sell)
Sold for $1,375,000 at 2007 Gooding & Company.
Sold for $2,970,000 at 2013 Gooding and Company - Pebble Beach.
Tom Tjaarda, working for Pininfarina as head-designer at the time, designed the 365 California. This ultra-exclusive vehicle had rear-end styling similar to the Kamm tail found on the legendary 250 GTO. The front had covered headlights, pop-up driving lights, and similar design cues from the 550 Superfast and the 330 GTC. The sides had expanding air ducts which would later become a recognizable feature on the Dino GT.By the mid-1960s, the Colombo-designed V12 engine was nearly two-decades old. It benefited from years of modifications and development, keeping it smooth, reliable, and powerful. The 365 California Spyder utilized the 4390cc single-overhead camshaft engine, fitted with three Weber downdraft carburetors, and had 320 horsepower at its disposal. It was a derivative of the recent 365P race cars.The chassis was courtesy of the 330 GT 2+2. The interior was a familiar Ferrari design, with instruments set back into circular pods.
In 1967, the price tag for the California Spyder was around $21,000, guarantying its exclusivity. Only fourteen examples were ever constructed, making it rarer than the 500 SF.
This example, the 13th created, is chassis number 10327 and has matching engine number. The original owner was James Ettinger of Norwalk, Connecticut, who took possession in the winter of 1967. There were only two examples of this model that did not have a pair of retracting auxiliary headlamps; 10327 is one of the two.This car is painted in Rosso Ciaro and has a white-hide leather interior. Since new, this car has been owned by Harley Cluxton, Al Garthwaite, and a few others. It has been driven a mere 36,300 miles since new and has been well cared for its entire life. In the mid-to-late 1990s, it was treated to a complete restoration.In 2007 it was brought to the Gooding & Company auction held in Pebble Beach, CA where it was estimated to sell for $900,000-$1,100,000. Though this was not the highest sale of the auction, it did join the a few other cars that were sold above the magic million dollar mark. Bidding surpassed the estimated value, settling at $1,375,000 including buyer's premium.
By Daniel Vaughan | May 2008

1967 Ferrari 365 California's that have appeared at auction but did not sell. 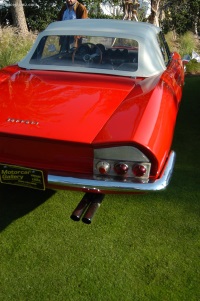