Sold for $660,000 at 2009 Automobiles of Amelia Island.
Sold for $698,500 at 2015 RM Sotheby's Hershey Auction.
Sold for $605,000 at 2017 RM Sothebys : Monterey.
This car was purchased new in 1911 by John Greenway Albert of Baltimore, Maryland. Soon after the purchase, he designed a special race car body and had it constructed by a local Baltimore coachbuilder. Mr. Albert called his new vehicle 'The Yellow Peril' and often removed the fenders and headlamps from the car and raced it on local dirt and board tracks. Mr. Albert once raced and beat the legendary race car driver Barney Oldfield with his Yellow Peril.Mr. Albert kept his Yellow Peril until 1968. Upon his passing, it was sold to a collector and raced in the Great American Races from 1984 to 1986. In 1988 it appeared in the movie 'Dakota.' The current owners have continued the legend of the Yellow Peril by driving it in several cross country reliability events during the past several years.

Sold for $660,000 at 2009 Automobiles of Amelia Island.
Sold for $698,500 at 2015 RM Sotheby's Hershey Auction.
Sold for $605,000 at 2017 RM Sothebys : Monterey.
September 6th, 1915, 24 cars lined up in race formation at the Labor Day Races held in Washington D.C. at the Bennings Race Track. Somewhere among the crowd of Mercers, Mercedes', Simplexes, Stoddard Daytons, Buicks and Stutz' was a yellow Oldsmobile wearing the number 11, and in the driver's seat sat J. H. Greenway Albert. Neither the car nor the driver was well known in the world of racing, so intimidation was undoubtedly not on their side. However, it was only a matter of time before all that would change.

The 28 year old driver, along with the family chauffeur and mechanic, Columbus Ridge, had modified their 1911 Oldsmobile Autocrat Tourabout with a one-off special aluminum body they had constructed themselves. They added a larger radiator core and a special gas generating system that Albert engineered himself. Albert's design utilized heat from the exhaust to facilitate a producer gas that, when added to the engine's hydrogen and free oxygen, produced a vapor that was vacuum drawn into the cylinders keeping them completely free of carbon. In today's simplified terms it is called fuel injection. By the time Albert and Ridge were done, the newly bright yellow Oldsmobile Tourabout had been transformed into the car that J. H. Greenway Albert would name 'The Yellow Peril'.

The 'Free For All' race, as the Labor Day Race was also called, was exactly that, with cars of 40, 60, 70, 90 and even 120 horsepower competing against one another. And on that rainy day in 1915, the timid 40hp Oldsmobile did not disappoint, putting on a show for the fans in authentic race competition style. Greenway later stated in an interview, It had been raining and part of the track was covered with water. I skidded off and went into the brush. When he returned to the track his car had fallen back toward the rear and it was covered in honeysuckle vines. In true racing fashion Albert fiercely piloted 'the Yellow Peril' back into the race, passing seventeen cars until only driver I. C. Barber remained in front of him. Giving it everything he and his car had, Albert went for the finish line. However, his fuel injection system overheated and sprayed gas onto the exhaust manifold and engine, Flames boiled out from under the wooden cowling and blazed brightly as Albert strained forward behind the huge steering wheel, trying to keep from getting singed. The wind blew the flames around and black smoke belched out from under the cowling. Still, Albert would not relinquish his ground. Witnesses would later say that it was an incredible sight....Barber driving flat out for the finish line....just behind him Greenway Albert hunkered down behind the wheel...the big, yellow Oldsmobile spewing flames and smoke and Albert refusing to pull over and jump to safety. Despite Albert's wholehearted and valiant effort, he finished second just moments behind Barber. Reports state that Greenway had even beaten the legendary Barney Oldfield and the Chevrolet brothers. It was reportedly the only loss Albert had in the Oldsmobile 'Yellow Peril' in all of his years of auto racing. 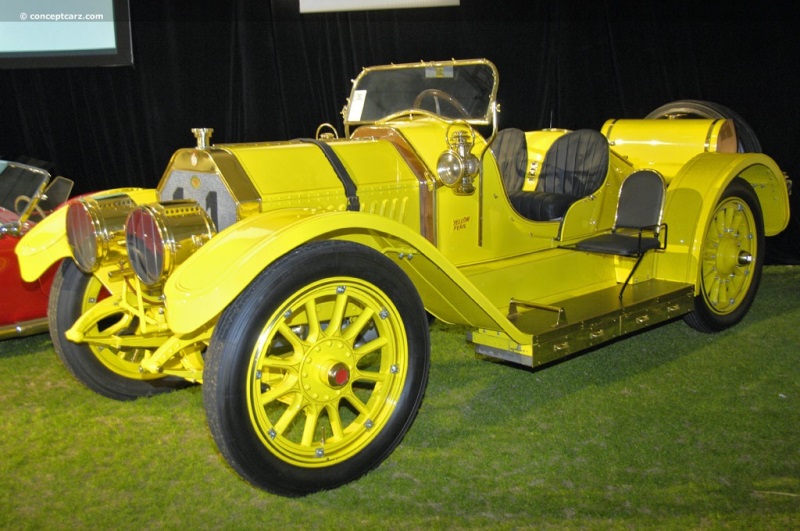 Eventually Albert retired from racing and moved to Tombstone, Arizona, along with his 'Yellow Peril' race car. While Albert lived in Tombstone, the 'Yellow Peril' was used as a parade car regularly in the town's festivities and always remained an active and important part of Albert's life until his untimely death in 1968.

In 1976 his widow sold the Oldsmobile, still in unrestored condition, to noted Franklin collector, Mr. Tom Hubbard. Mr. Hubbard owned the car only briefly before he sold it to Curtis Graf in Texas. While in the ownership of Curtis Graf, the famed 'Yellow Peril' was once again returned to the world of auto racing. Mr. Graf entered the 'Yellow Peril' in the Great American Race in 1984, 1985 and 1986 and managed an impressive top ten finish in 1985. Prior to its Great American Race adventures, the Oldsmobile's mechanics were restored by Curtis Graf with the assistance of Tom Lester's highly regarded machine shop and restoration facility. They replaced the beaten and worn cylinder jugs, recasting them from molds of the originals. The car's body was rebuilt by Stan Francis of Colorado. Today, the Oldsmobile 'Yellow Peril' bears an attractive and authentic looking patina reflective of both its vintage and most recent racing experiences. The Oldsmobile is fitted with E&J headlamps and a fold down mother-in-law seat, which is reported as being the original one to this car, as are the black leather cockpit seats.

Additionally, the 'Yellow Peril' is complete with a side mechanic's seat, front and rear Hartford shock absorbers and removable fenders for touring or racing. Prior to its three year stint in the annual Great American Race, it was fitted with practical and useful modern driving amenities such as seat belts, fuel and oil filters and selected modern gauges.

In 1990 William Lassiter purchased the 'Yellow Peril' to add to his collection. Since then he has left the car in the condition that he received it in, maintaining the car in good running condition for the past nine years. Mr. Lassiter has used his car sparingly during his ownership and shown it only minimally in competition. It is eligible for all HCCA and VMCCA events, as well as many of the long distance touring events which are currently so popular. The 1911 Oldsmobile Autocrat 'Yellow Peril' is a striking race car with a rich and interesting history, and is undoubtedly one of the most special and individual cars in the Lassiter Collection.Source - Christies

1911 Oldsmobile Autocrat's that have appeared at auction but did not sell.