Sold for $121,000 at 2006 Monterey Sports & Classic Car Auction.
Sold for $104,500 at 2007 Monterey Sports and Classic Car Auction.
Lamborghini began production of the mid-engined supercar in 1966 with the introduction of the Miura. Since that time they have continued to be a leader in this elite market. The standards were raised even higher with the introduction of the Diablo in 1991. The vehicle was aesthetically pleasing and mechanically advanced. By the mid-1990's Lamborghini created 31 examples of the type 'SV R' which were specially-prepared racing variants. The term 'SV R' represented Sport Veloce, Race. Along with the vehicle, the customer also received maintenance and repairs handled by Lamborghini. The Diablo SV R had similarities to the production SV version but were 191 kilograms lighter and used racing slick tires, and OZ Racing one-piece, cast magnesium eighteen-inch, hollow spoke wheels. The engine was modified, variable valve timing was added, and the fuel injection was revised, resulting in 540 horsepower. The interior was void of any amenities and comfort items.The example shown with chassis number ZA9DE22A0TLA12565 placed 2nd overall in the 1996 series and 3rd overall in the following year. It has been raced at Le Mans, Spa, Vallelunga, Brands Hatch, and Nurburgring. The art-work that adorns the vehicle was done by Georges Wolinski, a French artist. It is powered by a dual overhead camshaft V12 engine with light alloy block and 570 horsepower. It has a six-speed manual gearbox and disc brakes on all four corners.
At the 2006 RM Auction in Monterey, CA it was expected to fetch $100,000 - $125,000. At the conclusion of the bidding it had found a new owner at the price of $121,000 including buyer's premium. It was brought back again in 2007 where it again had the same estimated value. This time it was sold for $104,500 including buyer's premium.
By Daniel Vaughan | Dec 2007

Lamborghini Diablo SV-Rs That Failed To Sell At Auction

1996 Lamborghini Diablo SV-R's that have appeared at auction but did not sell. 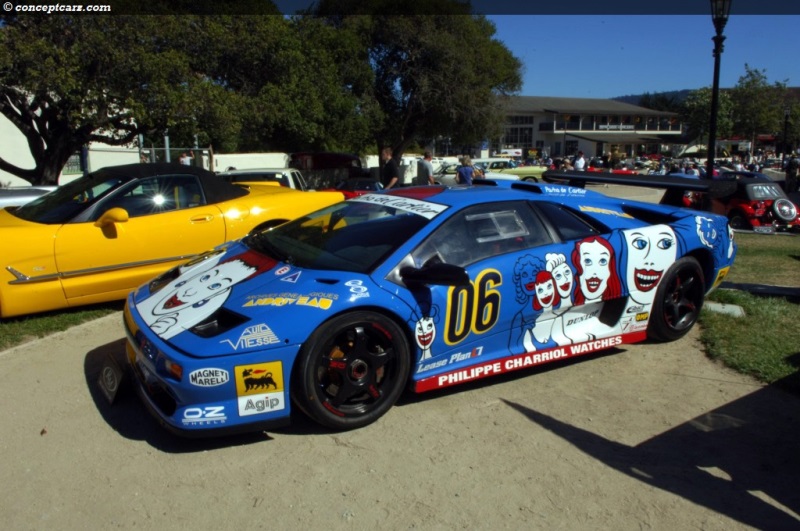