Sold for $1,688,500 at 2008 Vintage Motor Cars of Hershey by RM Auctions.
Sold for $2,300,000 at 2017 Auctions America : Auburn Fall.
This 1933 Duesenberg Model SJ Phaeton with coachwork by La Grande has chassis number 2540 and engine number J510. It possesses the sought-after eight-cylinder supercharged engine which promises 320 horsepower. In July of 1933 it was tested by the Duesenberg test driver, Mr. Lange, before being acquired by Mr. Ben E. Smith, Sr. of the brokers Hutton & Company in New York. It is one of only three supercharged phaetons built by La Grande and each rested comfortably on the longer wheelbase, measuring 153.5-inches. In total, there were fourteen La Grande Phaetons built, including the short wheelbase and non-supercharged cars. In modern times, only eight are known to exist. Only 18 long wheelbase supercharged cars of all bodystyles and from all coachbuilders were produced.This is the second of the three LWB cars built. It is a five passenger phaeton with an accessory rear windscreen. By 1944, the car was taken by Mr. Smith's son, Ben E. Smith, Jr., to Mexico where it was given to Bruno Paglie, the manager of the Hipodromo built by Smith in Mexico City. In 1950, the car was acquired by a used car dealer named Valentine G. Melgarejo. It remained in his possession for the following 18 years. William J. Metta of Alabama became the vehicles next care-taker, who is believed to have partially restored the car.
The next owner was a dealer based in Wisconsin, named James Southard, in 1975. It was quickly sold to Thomas S. Gene Storms who purchased a Leo Gephardt reproduction supercharged in 1979. The car would remain in California until it was brought to auction in 2008. The current owner acquired the car in the mid-1980s.
The car is painted in dark red with a cream sweep panel and reveal. There is a tan Haartz cloth top and tan leather interior. It is believed that the car has been driven 31,400 miles to date. It is well equipped with dual driving lights, cowl lights, rear-mounted trunk, dual side-mounted spare wheels and tires with hard covers and side-view mirrors. In 2008 this car was brought to the 2nd Annual Vintage Motor Cars of Hershey presented by RM Auctions where it was estimated to sell for $1,800,000 - $2,400,000. It was the highlight of the auction and the most anticipated sale of the evening. Bidding reached 1,425,000 but stalled. The car was rolled off the stage and listed as a no-sale. Later that evening, the car was sold for $1,688,500 including buyer's premium.
By Daniel Vaughan | Oct 2008

1933 Duesenberg Model SJ's that have appeared at auction but did not sell. 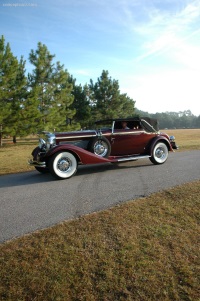