History-changing greatness often comes from the most humble or simple beginnings. Such was the case with the McLaren F1, the world's fastest car by a wide margin for more than a decade, which was reportedly conceived during a casual discussion at an airport lounge in Milan. Team McLaren, then as now a dominant force in Formula 1, had just given up its only victory of the 1988 racing season when Ayrton Senna retired earlier in the Italian Grand Prix. McLaren's Ron Dennis, Creighton Brown, and Gordon Murray sat with TAG's Mansour Ojjeh waiting for a plane when the discussion of a world record-dominating supercar for public use came up. As the story goes, Murray drew a sketch of a sleek car with the driver sitting in the centre as in a Formula 1 racing car. Dennis was enthralled with the idea and the group agreed to begin developing a phenomenal supercar that would essentially combine the technological advancements and super exotic materials of a racing car in a street-legal package.

From its inception, the supercar's design drew heavily on F1 race cars – not only giving the vehicle its now-iconic moniker, McLaren F1, but also endowing it with engineering feats seemingly lifted directly from competition cars. The McLaren F1 was the first vehicle to feature a monocoque composed of ultra light-weight carbon fibre, for instance, and magnesium, titanium and Kevlar were used throughout for strength and weight savings. It goes without saying that cost was not an issue during development.

Murray capitalized on the fact that McLaren was, at the time, using Honda engines in its F1 cars, so access to the late F1 champion Ayrton Senna was no issue. Senna's developmental work on the mid-engined Honda NSX, renowned not only for its configuration but for its fairly novel approach to high performance from a smaller displacement engine, weighed heavily on Murray's mind. He is quoted as having said that the exotic cars of Europe that were his initial benchmarks, those references 'vanished from his mind' after experiencing the NSX. 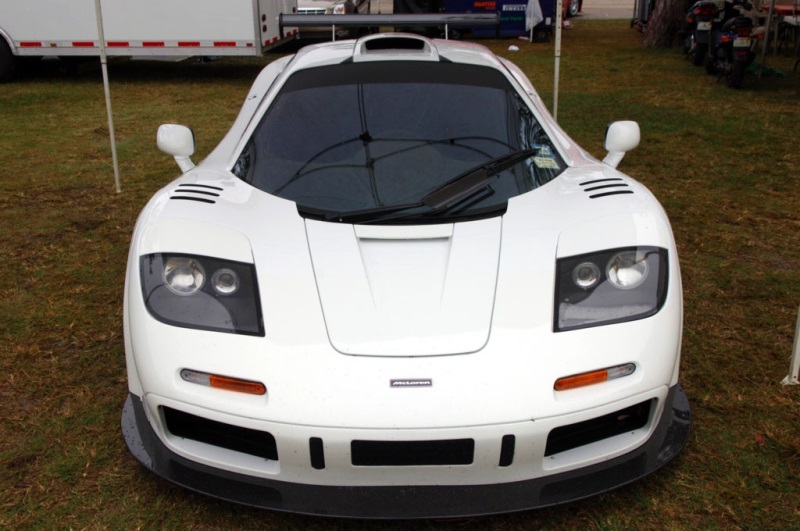 While in Tochigi, Japan, at Honda's research center, Murray tried to convince the Japanese automaker to develop a roadgoing engine developed from its F1 powerplant, but interest was slight. After shopping around a bit, Murray found that BMW's Motorsports division – known to enthusiasts simply as BMW M and headed up by Paul Rosche at the time – was interested.
To achieve the required performance, BMW presented a 6.1-litre, 60 degree V12 developed from, but sharing absolutely no parts with, their V12 engine. The S70/2, as it was called internally, displaced 6,604 cc and with BMW's VANOS two-position adjustable variable valve timing, its output exceeded Murray's requirements at 627 horsepower at 7,400 rpm (just shy of the 7,500 rpm redline). At 285 kilograms, it was not heavy, but it weighed more than Murray initially wanted. BMW managed to trim the weight down to 266 kilograms for production.
The technology wrapped up in the engine is, to put it mildly, astonishing, especially given the short development period. Magnesium was used throughout – for the cam carriers, oil sump, dry sump, and more – to cut down on weight. It features four overhead camshafts, two per cylinder bank and four valves in each combustion chamber. Each cylinder features two Lucas injectors to allow the fuel to fully atomise – each injector operating at a set rpm range.

The carbon fibre monocoque and carbon fibre body panels required substantial insulation from the engine compartment. Murray's solution was to line the bay with gold foil, naturally a very expensive but also very effective reflector. Murray also dictated that the F1 function without the complex electronics in so many other supercars in the early 1990s. Driver aids like power steering, a semi-automatic transmission, traction control and anti-lock brakes were not even considered for the F1. A six-speed manual gearbox with a carbon triple-plate clutch and a Torsen limited-slip differential helped put power to the rear wheels. Únassisted, vented and cross-drilled Brembo brakes were standard, making the F1 the true 'driver's' supercar.

Though the F1 was designed to be a race car for the road, it was decreed that a certain level of comfort be standard. Thus, features like air conditioning, electric windows, and a bespoke Kenwood radio (designed specifically for each customer) were all included. This level of comfort also required a certain amount of flexibility to the chassis. In Murray's eyes, it needed to be more compliant than a trackgoing vehicle while still being the ultimate roadgoing automobile.

By positioning the car's mass in the centre – the driver is flanked by and slightly ahead of the two passengers and the powertrain is mounted amidships – the F1 handled superbly. Thus, the engineering team did not need to fit swaybars, an amazing feat in a production car. Not only did this reduce weight, but it also gave the F1 an especially livable ride. Weight distribution was set at 42 percent in the front and 58 percent in the rear.

In late 1992, just 34 months after the group first met, the first prototype McLaren F1 saw the light of day and a year later, the first production model of the 107 eventually produced of all types, came to fruition. The development itself was not without its share of setbacks – the first prototype met an untimely demise during testing in Namibia in April 1993, thus accidentally demonstrating the strong safety cage inherent in the racing design.

McLaren assembled three additional prototypes for testing shared with BMW. The most notorious of which, the second car, codenamed XP2, was used as a crash test vehicle to scientifically prove the vehicle's safety. Not only did it collide with a concrete wall at speed, the F1's phenomenal strength was proven beyond a shadow of a doubt when XP2 was subsequently repaired and used for further development.

The lightweight construction ultimately paid off for the F1. Though the curb weight did not meet Murray's initial goal of a 1,000 kilograms, tipping the scales at 1,138 kilograms is hardly a disappointment. Fifteen years later, the F1 remains one of the lightest supercars ever produced. 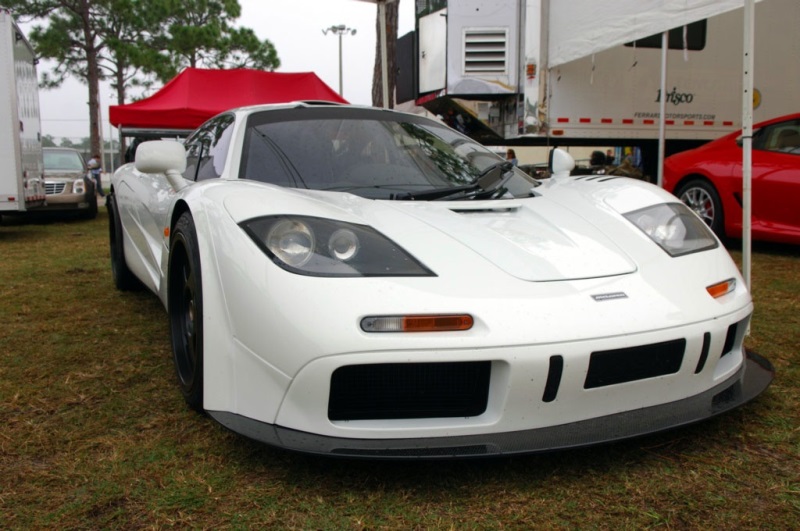 While it was initially designed as a roadgoing car, motorsports teams convinced McLaren to produce a version of the car to compete on track. There were three different track-only versions produced, the GTR – available in 1995, 1996 and 1997 – the LM, or Le Mans, and the final incarnation of the supercar, the GT. The GTR is most famous for its overall victory in the 1995 24 Hours of Le Mans at the hands of Yannick Dalmas, Masanori Sekiya and J.J. Lehto.

A handful of the F1 GTRs have since been converted for road use now that they are no longer eligible in FIA sanctioned racing – a testament to the few changes that had to be made to the basic F1 to create a racing machine. The simple addition of mufflers, moderately raised right height for public streets and the removal of air restricting devices allowed the F1 to be made into a street legal vehicle in many markets.

Yet despite its tremendous performance on track – and especially its reliability – the F1's most notable achievement in the eyes of many is one that creator Gordon Murray asserts was not its original intention: speed-related records.

In April 1998, Andy Wallace got behind the wheel of the fifth prototype – XP5 – at Volkswagen's Ehra test track in Wolfsburg, Germany, to help determine the F1's capabilities. A nine kilometre straight, the Ehra test track allowed Wallace to run the speed limiter-less F1 out to 391 kilometres per hour (243 miles per hour), a production car record that would not be broken for nearly a decade. The F1 remains the fastest naturally aspirated production car in the world since the handful of cars that have broken the F1's record relied on forced induction. The F1 also holds its own in the zero to sixty mile per hour sprint, achieving the mile-per-minute figure in just 3.2 seconds and runs the quarter mile in 11.1 seconds.

The first F1 available to a customer was produced in December 1993. Just 69 examples (including the 5 prototypes) were built for road use by the time production ended. Assembly of track-only F1s continued until 1998 culminating in 107 F1s of all types produced, including the prototypes. Though production was brief and few cars were assembled, to say that the F1 is anything but a legend is a serious understatement. 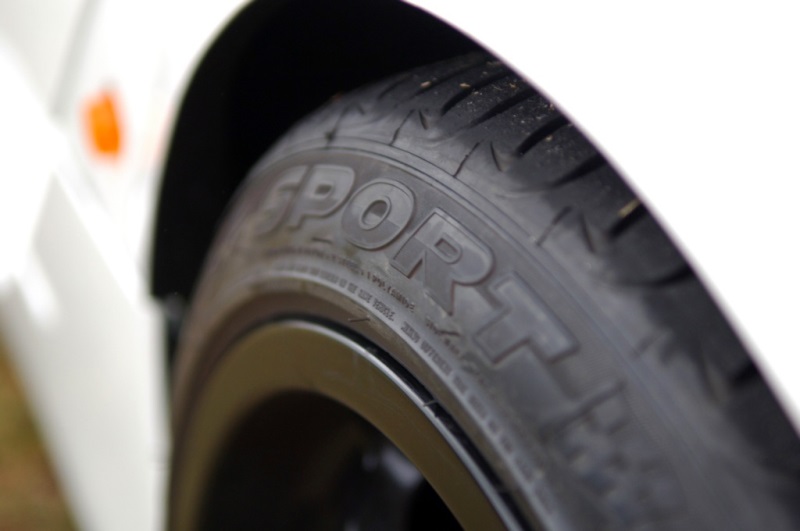 This particular McLaren F1 is quite simply, a once in a lifetime opportunity to acquire one of the most significant examples of one of the world's greatest supercars. It is offered here for the first time since it was sold by McLaren, directly from its first and only owner. The last roadgoing F1 ever produced, this vehicle, production number 065, was the Park Lane showroom car for McLaren. Admired by many onlookers, it is perhaps one of the most famous roadgoing F1s, as it remained the factory's flagship car for many years.

In 2004 McLaren elected to close the Park Lane showroom and chassis 065 returned to the factory where it underwent a full service in preparation for its sale to the current Asian owner. As such, it is the last McLaren F1 ever delivered and, since delivery, has never been raced or driven aggressively. As every McLaren, it has been subject to the utmost attention to detail, with the current vendor even flying a McLaren mechanic to Asia to service the car 12 months ago. It has since been returned to the McLaren factory in Surrey for a full service, and is offered with a full clean bill of health.

Showing 484 kilometres on its odometer, production number 065 is, as one would expect, flawless in every respect. It is finished in the Magnesium Silver so associated with McLaren F1s, complemented by a stylish and sleek black leather interior. It is essentially a new vehicle and remains virtually unused and untouched. The buyer will of course receive the original Facom titanium tool kit and bespoke leather luggage. In addition, the carbon-fibre transmission tunnel adjacent to the driver's seat has been signed by Gordon Murray himself.

McLaren F1s are unlike anything else on the road with their lightweight, aerodynamic bodywork and underhood sophistication, not to mention their record-holding status. With numerous track records, the most advanced supercar engineering available at the time and, of course, the inevitable exclusivity commensurate with its development, the McLaren F1 is perhaps the greatest modern supercar, and in the eyes of many collectors the modern equivalent to the legendary Ferrari 250 GTO.
Source - RM Auctions
No auction information available for this vehicle at this time.

1994 McLaren F1's that have appeared at auction but did not sell. 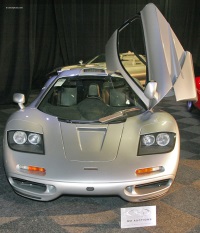