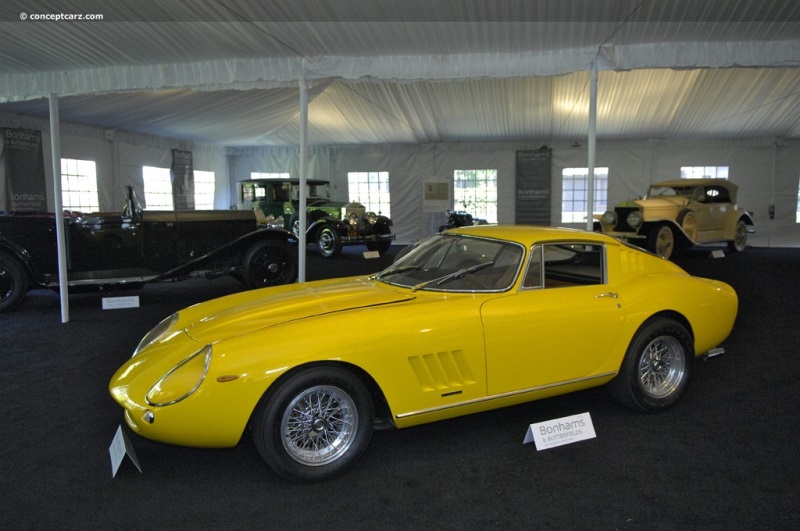 Coupe
Coachwork: Scaglietti
Chassis #: 10311
There were nearly 800 examples of the 275 Berlinetta produced from 1964 through 1968. A two-cam version of the 275 was introduced two years later. A four-cam version soon followed. Though the Ferrari factory never produced a competition 275 GTB/4, there was a run of alloy body versions manufactured to special order. These lightweight aluminum, alloy bodies weighed around 260 pounds less than their steel counterparts. For the two-cam Berlinettas, around 27 alloy bodies were constructed with two-gauges of aluminum used. Around 17-19 of the alloy-bodied cars were made with the four-cam engine.This 1967 Ferrari 275GTB/4 Alloy Berlinetta is chassis number 10311 and wears coachwork by Scaglietti. It first race was at the 1968 Watkins Glen Six Hour race where it was run under the NART (North American Racing Team) banner. The drivers were Bob Grossman and Ronnie Bucknum. When the checkered flag fell, they were seated in ninth position after traveling 240 laps. To prepare it for the race, the bumpers had been removed, an outside exhaust system was installed, a roll bar was inserted, an external gas filler was built to feed the twin fuel tanks, twin Bendix electric fuel pumps and 15' x 7' Borrani wire racing wheels were fitted. Some tuning was done to the engine.The car was brought to Daytona but it did not have a driver. There were a few drivers available, such as a young Sam Posey and Ricardo Rodriguez. Rodriguez was a cattle rancher from South American who had a passion for racing. Posey had never raced in a Ferrar. During the race, the gearbox failed. There was no spare, so the crew attempted to rebuilt it in the pits. The unit was fixed and the car returned to racing. It finished 2nd in class and 23rd overall. This was an impressive accomplishment, especially after loosing 3 hours in the pits.
By the early 1970s the car was in Houston. At this point in history it wore a metallic brown paint scheme and was owned by Dr. Ron Finger, a plastic surgeon, who would go on to own many interesting Ferraris. In 1972, the car was purchased by a young doctor Frenger for $8,000. During the next two years, the car was painted white, similar to its original ivory color. A $1,200 valve job was performed on the engine.
Skip Berg became the cars next caretaker in 1984. While in his care, the car was given a restoration. Some time prior in its life, the car had been in an accident and the repair job was done poorly. The cars restoration was featured in Cavallino magazine in issue number 40, August of 1987. In 2008, the car was offered for sale at the 'Quail Lodge, A Sale of Exceptional Motorcars and Automobilia' presented by Bonhams Auction. It would leave the auction unsold.
By Daniel Vaughan | Dec 2008