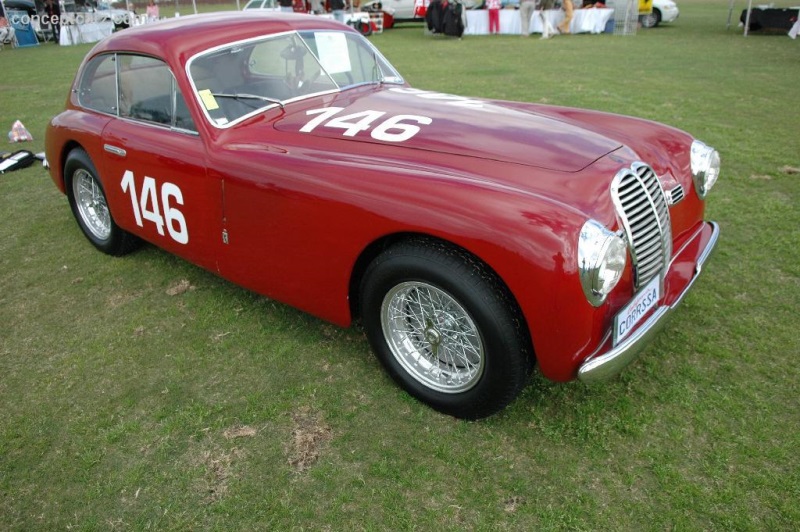 Construction of the first Post-War Maserati Sports Cars began in late 1946 at which time despite many difficulties, they were able to complete two examples. These were given the chassis numbers '049' and '051'. 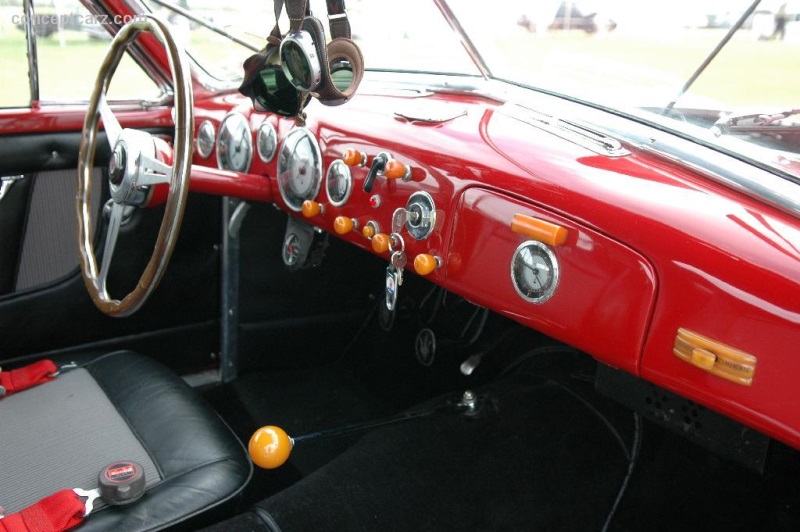 These first Post-War Sports Cars were based on tried and true methods utilizing large section oval-tube frames and a Fratelli Maserati designed 1500cc, in-line six-cylinder, single-overhead-camshaft engine. The majority of these cars received a single Weber carburetor and produced 65bhp at 4700rpm. 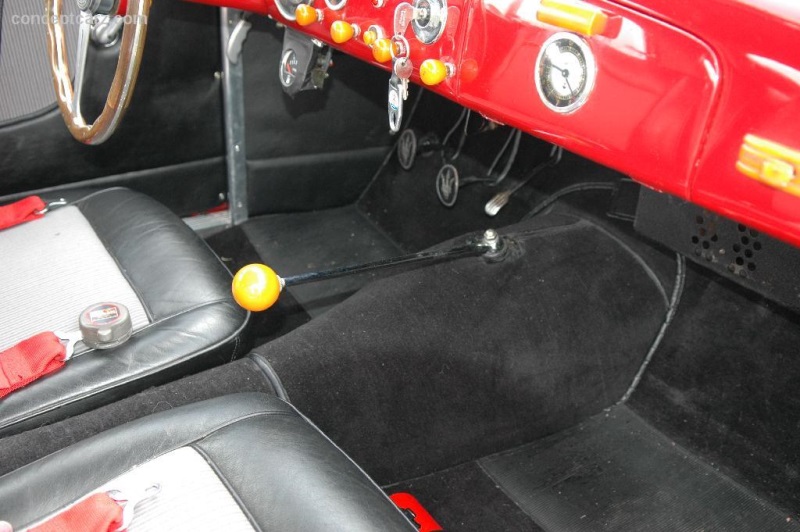 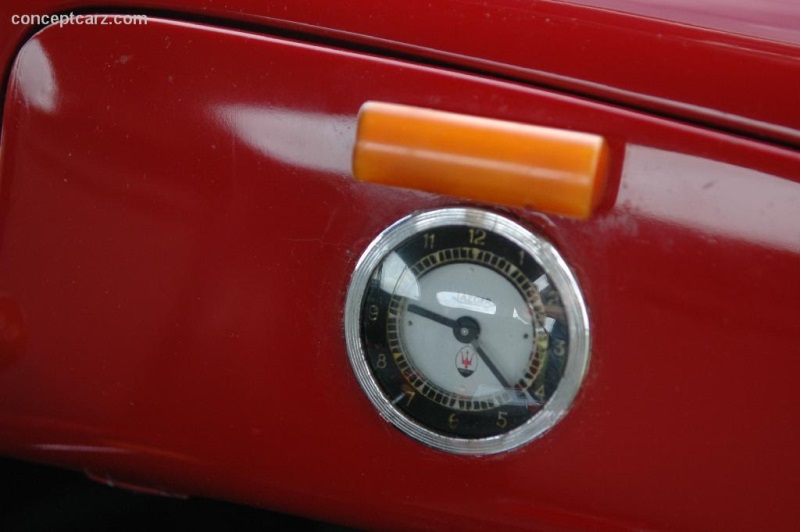 Coachwork was mostly by Carrozzeria Pinin Farina with some rather crude open and closed body-work on the first few cars followed shortly by far more attractive 'Fast-backed' Berlinettas in light-weight aluminum. Tipping the scales at a mere 1675 to 1925 lbs, the cars were light and nimble. They had to be as the small 1500 cc engines could not have coped with much more. At least one example was bodied by Carrozzeria Zagato and Pinin Farina bodied at least one production car with beautiful open 'cabriolet' style coachwork.

Sometime during the 1949 production run in early May of that year and beginning with this car, chassis number '086', a triple-Weber carburetor engine with slightly higher compression, higher profile camshaft and corresponding re-curved ignition timing became available. Maserati's records indicate that five such cars were delivered new, Chassis numbers '086', '087', '088', '089', and '090'. Many of the cars produced before and after these five cars were likely given a similar updates to their engines. With these features horsepower was claimed to be 100 but was more than likely something in the order of 90.

Individual History For Chassis *086*
Chassis/Engine Number *086* was completed in the late summer of 1949 and as noted it was the first of the cars completed with the improved and higher output engine. Maserati's records indicate that it was initially painted grey.

The car was sold new on the 14th of September 1949 to Signorina Isabella Quarantotti Ippolito of Positano, Italy. Signorina Ippolito was just 27 years old when she took delivery of her new Maserati Sports Car. She was born in 1921 and died on February 18th of 2005 at the age of 84.

Signorina Ippolito lived an extremely interesting life. While Positano, Napoli, Capri and the Amalfi Coasst were her home, she was well educated and well traveled. Signorina Quarantotti was a direct descendent of the House of Savoy whose Royal Germanic and Gallic Families dated directly back to King Rudolf of Burgundy in 1038AD.

Her first husband Happy Ippolito was one of the fathers of the Italian Nuclear Energy Industry. She later divorced and married Eduardo de Fillipo to whom she was married for over 50 years. Classically educated in law, philosophy and medicine, most new her as one of Italy's most famous dramatists, play-writes, author and long time friend of Sir Laurence Olivier. Few however knew that one of her earlier passions included Sports Cars. Just four years after World War II, Isabella ordered this new Maserati Sports Car which was delivered to her early in the fall of 1949.

Eventually her writing took precedence in her day to day activities and the Maserati which was now used infrequently was sold. 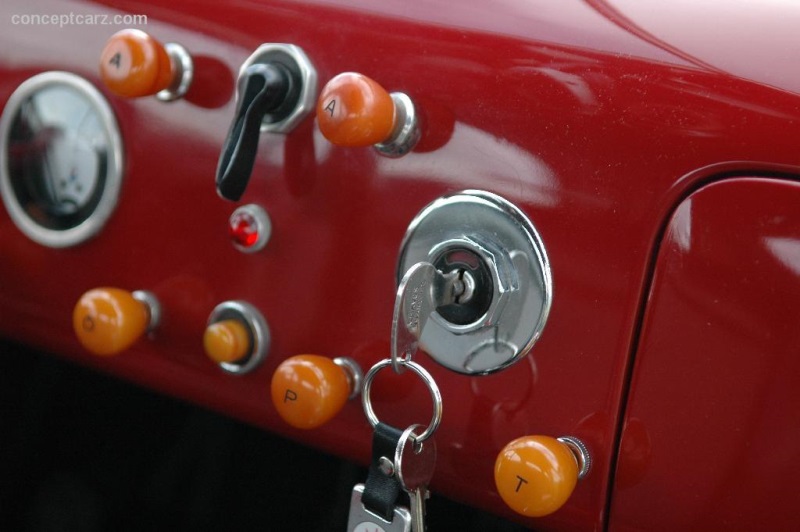 This car was then owned by two additional Italian families before being purchased and shipped to the Únited States by Mr. Robert Baker of La Jolla, California. Mr. Baker owned the car until the late 1970s when it was acquired by another Southern California owner. At this time the original 1500cc Maserati engine and gearbox were removed and set aside while a Ford 260ci V8 and C5 automatic gearbox were fitted in their place. The car remained this way until being purchased in 1981 by Wiliam McKinley of Sacramento, California. (Mr. McKinley was a lawyer by trade.) At the time of his purchase the original engine and gearbox were sold with the car along with a variety of other miscellaneous spare parts.

The car and various spare parts were all trucked by Brian Moore's Performance Painting located at 2437 Gold River Road Únit 'L' in Rancho Cordova, California 95670. An exhaustive and complete restoration was then performed with mechanical work being carried out by Tex Countryman. Further assistance was provided by noted Maserati 'Guru' Paul Merrigan.

In August of 1983 the car was entered and raced by McKinley wearing race number 112 in the Monterey Historic Races.

The car then appeared in a variety of publications as well as various Maserati meets and Concours events throughout the West Coast.

In 1984 it was shown at the Maserati International Meet, North Star, Lake Tahoe where it was awarded Best in Show and event poster 'cover car.'

In 1984 it was also the recipient of a third place award at the Sacramento Concours d'Elegance.

In August of 1984 it was invited to and judged in the Pebble Beach Councours d'Elegance where it received a 3rd in class award.

It then appeared in the fall of 1984 at the Newport Beach Concours d'Elegance where it received a 1st in class.

In September 1984 the car was featured on the cover and back of Viale Ciro Menotti the Magazine for Maserati Enthusiasts. Inside front cover has a photo credit that reads: 'Front and Rear Cover: 1949 A6 1500 (No. 086) owned by William and Lori McKinley, Sacramento, California. Front cover background is the state capitol building. Photos compliments of William McKinley.'

Later that August the car was auctioned off at the Rick Cole / Monterey Sports Car Auction where it was purchased by an English enthusiast.

1988 featured in the book The Great Book of Sports Cars, Dean Batchelor, Chris Poole and Graham Robinson. Pages 262 and 263.

(Ownership of the car in this book is given to 'Domino's Rearview Mirror' in Ann Arbor, Michigan which was owned by Domino's Pizza founder Tom Mognahan.)

1992 Sold at Hershey, PA to Fernando Santos Martins, Lisboa, Portugal. (The car was sold by Blackhawk of Danville, CA.)

The car remained with Sr. Martins for twelve years as part of his vast collection and was used on only a few occasions.

October 7th-9th, 2005 - Invited to participate, entered and raced by Bill Noon on race number 146 in the Coronado Festival of Speed.

November 18th-20th, 2005 - Invited to, entered and raced by Bill Noon on race number 146 in the Palm Springs Revival Road Race.

January 22nd, 2006 - Invited to, entered and displayed at the Cavallino Classic at the Palm Beach International Concours in Palm Beach Florida.Source - Bill Noon