As with many British specialist manufacturers, AC Cars had been using the smooth, refined Bristol straight-6 engine in its small-volume production, including its AC Ace 2-seater roadster. The engine was a pre-World War II BMW design which was by the 1960s considered remarkably outdated. Bristol, a small independent automobile manufacturer in its own right, decided in 1961 to cease production of its engine and instead to use Chrysler small-block V8 engines. Non-plussed by this idea, AC started using the 2.6 liter Ford Zephyr in all of its cars. An idea was borne out of this concept and in September of that year, former champion racing driver Carroll Shelby approached AC about building a car that would accept a V-8 configuration. Chevrolet was not interested in providing their new 327ci V-8 due to too much direct competition with the Corvette, however Ford wanted a car that could compete with the radical new Sting Ray from across town. As luck would have it, they happened to have a brand new thin wall small block engine which could be used in this endeavor. The name Cobra came to Shelby 'in a dream', he recounted, and a legend was born.

By 1963 the original AC Bristol-based leaf spring Cobra was losing its supremacy in racing. In desperation, Shelby tried fitting a big Ford FE engine of 390ci. Ken Miles drove and raced the FE powered Mark II car and said that the car was virtually undrivable, naming it 'The Turd'. A new chassis was designed in cooperation with Ford in Detroit, then developed by Shelby American and designated the Mark III. A whole new chassis was built which featured 4' main chassis tubes (instead of 3') and a new coil spring suspension all around. Necessitated by the suspension redesign and the wont for a greater contact patch, the car had wide fenders and a larger radiator opening. It was powered by the famed 'side oiler' Ford 427 engine developing 425 bhp and attaining a top speed of 163 mph in the standard model and 485 bhp with a top speed of 180 mph in the competition model. The production of the Cobra Mark III began on January 1st 1965, three months after two prototypes had been sent to the Únited States in October of 1964. 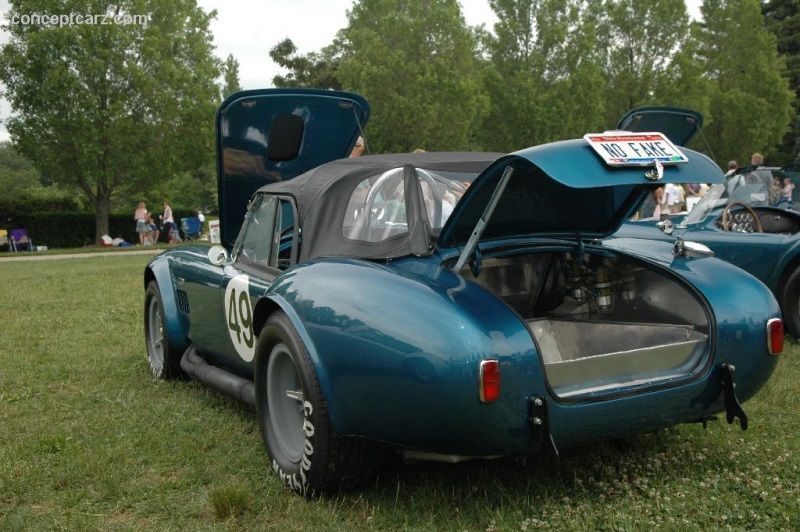 After a thorough clean up, the car was sold on 12/7/65 to J.D. Hurt. He, however, did not choose to take delivery until the following spring, and agreed to allow Shelby American to rent CSX3012 to MGM Studios for use in the Elvis Presley movie Spinout. Records indicate an insurance claim for damage to the car while at MGM and Hurt's deposit was applied to another Cobra. CSX 3012 was once again repurchased by Shelby American and was invoiced on 4/5/66 to Donald Peckman. Peckman rebuilt the car and raced it during the 1966 season, painted white with a thin Blue stripe down the center of the car. Raced in Riverside and featured in a Car and Driver editorial, which stated it as being the best-appearing and fastest Cobra at 1966 ARRC. Early in 1967 Charles T. Oseid purchased the Cobra in the name of his company. Sterling Automotive Mfg. Co. Oseid continued to race prior to an unfortunate accident while being transported on a trailer in the early 1970's. Following this incident, the car was dismantled with Oseid retaining the salvageable parts and most importantly the ownership MSO document he obtained from Peckman.

In 1985 George Stauffer purchased the MSO and various parts to 3012, and had Brain Angliss of AutoKraft in England rebuild the car utilizing a new chassis and aluminum bodywork. The finished car, painted dark green, was sold prior to its actual completion in the summer of 1988 to George Gillett, then in 1992 it again changed hands to vintage racer Jim Philion. Featured in several prominent vintage events, including the Wine Country Classic held at Sears Point in June of 1995 and driven by Rick Titus, CSX 3012 also won Top Popular at SAAC-20 in 1995. Driven once again that August by Rick Titus at the Monterey Historics, this car received the Thomas W. Senter Memorial Award for representing the most significant Ford or Ford Powered vehicle at the event.

As one of the finest Shelby American automobiles, the ex-Lothar Motschenbacher 1965 Shelby 427 Cobra Full Competition offered here is an absolutely beautiful example is one of only 22 full competition models to leave the factory. Motschenbacher successfully campaigned this car in the '65 ÚSRRC Championships against Ken Miles in the factory 427 and Jim Hall's legendary Chaparrals. A year later, Elvis Presley and CSX 3012 co-starred in the hit movie 'Spinout.' From the fame this added to both Shelby and the music legend, CSX 3012 was to be known as The King's race car for all time. This Cobra includes complete ownership history and thorough documentation. Further, it features a concours-quality restoration and continues to achieve significant awards on both the show-field as well as the track.