Chevrolet's Corvair was introduced initially as an economy car with a rear-mounted air-cooled engine, Chevrolet quickly moved to diversify the model line into all conceivable variants of passenger automobiles. As a result, the early Monza model offered superior handling and exceptional performance, Corsa and 500 sedans offered general transportation, while Greenbrier vans and Lakewood station wagons offered unusual utility and cargo room. An update to the styling in 1965 left the vehicle with a design that was very European but also saw major revisions to the suspension geometry from stem to stern. The resulting effect was a slightly wider and lower stance.

The Corsa and Spyder were now the top-of-the-line models in respects to performance and style, a title taken away from the Monza. The Corsa models were equipped with a 140 horsepower four-carbureted six-cylinder engine and fixed to a four-speed manual gearbox. It was offered in two configurations, a two-door coupe and power-top convertible. The interior featured a 140 mph speedometer, re-settable trip odometer, 6000 rpm tachometer, analog clock with second hand, and chromed gearshift boot. The exterior was adorned with badging, dual exhausts, and aluminum-finish taillight cove.

This 1966 Yenko Stinger, Yenko serial number YS-003, is likely the most original, best restored, documented, and most heavily optioned Stinger surviving. Number 3 of 100 homologation specials fleet-ordered and modified by Yenko Chevrolet for homologation into SCCA production racing, YS-003 was one of only 5 documented to be delivered as a 220hp Stage III car showroom-ready for D Production class road racing. In addition to all of the standard Stinger features, this Stage III Stinger still retains the factory rollbar, four big-bore high-flow carburetors, special Yenko exclusive 3.89 positraction transaxle and widened wheel options it was delivered with. YS-003 also has the rare distinction of being a production stripe delete car delivered and largely raced without stripes. With this in mind, it was restored to this condition. 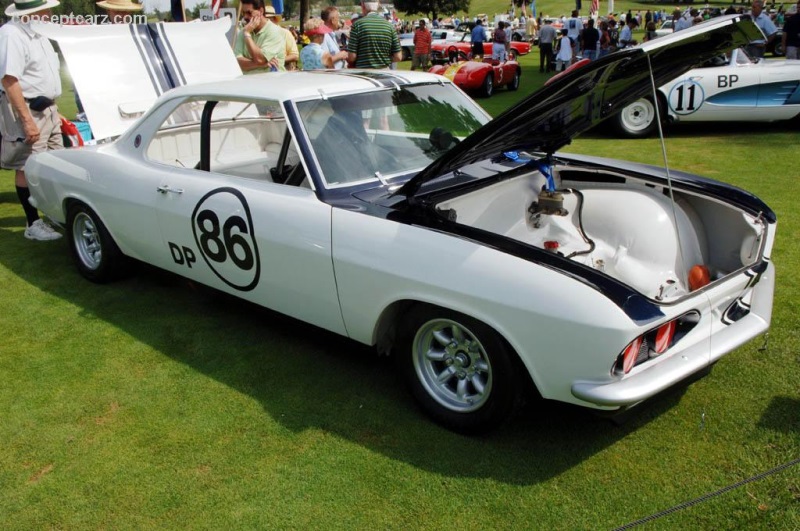 Never wrecked or rusted, this is an original body Yenko with correct date coded engine and documented ownership history since new. Provided documentation includes the original invoice signed by Don Yenko listing all options. The original title, correspondence from early owners, and period race photos are also included with the sale. All three original body tags unique to Stingers are present and original including the Yenko serial number and special fleet ordered option tags. Hidden chassis stamped serial number was confirmed during restoration. YS-003's ownership has been documented in the Stinger Registry since its inception. The car was rented early on by Walt Disney Pictures for race scenes in the movie 'Herbie Goes to Monte Carlo' and can be seen driven by Max Balchowski beside the Love Bug in that movie. YS-003's second owner, noted automotive author Richard Finch, featured photos of this Stinger throughout his book 'How to keep your Corvair Alive'.

A component level professional, mechanical, and cosmetic restoration to as delivered from Yenko Chevrolet, and as raced in its 1966 condition was completed in early 2008. Great effort was made to insure that YS-003 is historically accurate down to the correct original Yenko oil pan, Yenko headers. Yenko air cleaners, as ordered GM quick steering, even the 3.S9 ratio posi that was a special GM code only available to Yenko. In an effort to return the car to exactly 'new' condition, the vast majority of the chrome, trim, rubber boots, grommets, interior suspension, etc used in the restoration were NOS GM. This Stinger is as nice on the bottom as it is on top.

1966 Chevrolet Corvair Yenko Stinger's that have appeared at auction but did not sell.