High bid of $4,900,000 at 2009 Automobiles of Arizona. (did not sell)
This is the second of five lightweight, purebred racing cars built in the Chevrolet Engineering Center in 1962 and 1963. Unfortunately, due to a total corporate ban on racing by General Motors in 1963, the Grand Sports would never have the corporate backing that all their competitors were receiving. Still, for a brief moment, the racing world took notice as these 1,900-pound, 500-horsepower beasts drove past the Fords and Ferraris of the day. 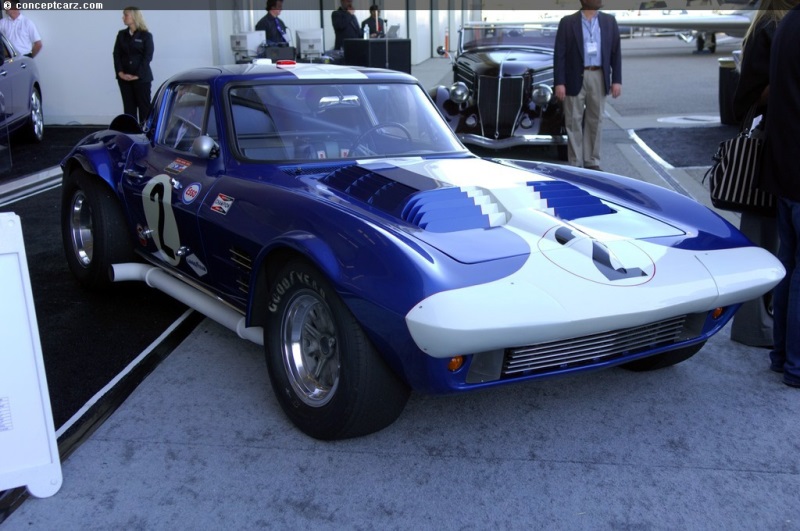 A half century ago Chevrolet's Corvette was just beginning to assert itself as a serious, competitive sports car. As it achieved success in road racing its potential seemed nearly limitless.Road racing was singularly important at the time and it, too, had wonderful prospects. It offered the only opportunity to campaign production-related automobiles in closed circuit national competition and grew by leaps and bounds, adding circuits, drivers, series and competitive marques. Among the marques that were competitive in road racing, however, only Corvette was home-grown. Tied to GM's bins of existing parts and reined in by upper management's adherence to the 1957 AMA racing ban, a few competitive Corvettes nonetheless kept the model's competition record going. Singular successes – like Briggs Cunningham's team of three Corvettes at Le Mans in 1960 and the eighth place finish of one of them – encouraged rumors of factory-backed racing Corvettes, helped by occasional sightings of the real thing. The culmination of Corvette's early development were the Corvette Grand Sports. They were the emblem of its potential and their combination of technical accomplishment, competitive performance and the brilliant design of Bill Mitchell and his staff at GM have perpetuated their image, reputation and legend. They also were the culmination of factory backing for Corvette racing at the highest levels, a much anticipated but sadly lost opportunity.The excitement the Grand Sports generated was more than just about Chevrolet or General Motors, it was the possibility that a production-based American sports car could beat the legendary sports car marques from Britain, Italy and Germany in the mythical endurance racing battles at Le Mans, Daytona, Targa Florio, Sebring, Spa Francorchamps and Monza as well as holding up the home teams' honor at America's road racing circuits.In the end Chevrolet built only five Grand Sports, the leading edge of a planned run of 125 cars that was stillborn when the suits on the Fourteenth Floor of the GM Building reaffirmed its decision that there would be no overt support for racing.Most cars assume legendary status after their active racing lives are over, but the Grand Sports were already legends when they appeared on the track for the first time, chimeras that emerged from the mists of myth in metal, rubber and fiberglass to take part in storied competition. They titillated and teased their competitors and their followers with their promise.Today they remain five of the most exciting, fabled, wondrous competition cars ever built, designed and built for competition at the highest international levels. Their design by Bill Mitchell and his colleagues is instantly recognizable. Bedecked with scoops and vents, dramatically sculpted and formed, their visual features achieve functional goals with grace, creativity and intuition that is rarely seen on racing cars. They are aggressive, functional, balanced and sleek all at once.The Grand Sports' Evolution 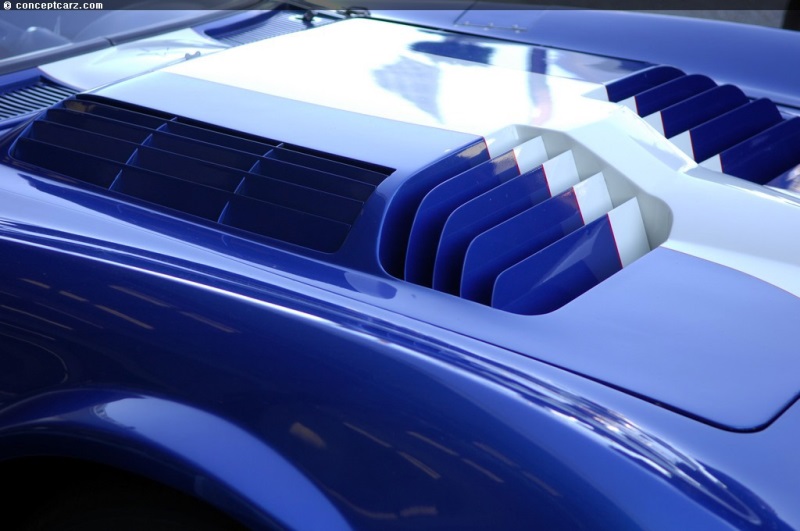 Corvette's engineering evolution was guided by Zora Arkus-Duntov, but he was encouraged and given running room by Ed Cole, a brilliant engineer and a dynamic leader doing his turn running Chevrolet while on a fast track through General Motors.The first hint of Corvette's ambitions in the top rank of international racing events was the Corvette SS. It appeared at Sebring in 1957, a state of the art front-engined race car using the Chevy V8 and a lightweight space frame chassis. It immediately fell afoul of the Fourteenth Floor's adherence to the Automobile Manufacturers Association's racing ban. GM design chief Bill Mitchell purchased the testing mule from the SS program, installed a dramatic streamlined body which foreshadowed the 1963 Sting Ray and supported Dr. Dick Thompson who raced it in SCCA in the 1959 and 1960 seasons.In April 1962 Zora Arkus-Duntov created a memo justifying a 'Light Corvette' which would be competitive at the highest levels of sports car racing yet would skirt the Fourteenth Floor's adherence to the AMA ban by being sold to and raced by private entrants. With the backing of Ed Cole's successor, Bunkie Knudsen, a team led by Duntov embarked upon the design and construction of the Grand Sports, all-out racing cars designed to meet the strictures of the FIA's newly created Grand Touring class.The Grand Sports looked like Corvettes. They would go like something entirely different.Five prototype Grand Sports were begun. Based on a large diameter twin tube frame with beefy tubular crossmembers they had fully independent suspension fabricated from lightweight components, coil front springs, a featherweight fiberglass body reinforced by a lightweight fabricated and welded aluminum 'birdcage' rollover structure. Its engine would be an all aluminum 377 cubic inch masterpiece with hemispherical combustion chambers, dual ignition and dry sump lubrication breathing through a set of four 58mm Weber side draft carburetors. Three piston caliper, 11 1/4' vented disc brakes were developed by Chevrolet and Girling.Tests were made at Sebring in late 1962 but once again the Fourteenth Floor heard about Chevrolet's attempt to circumvent the AMA ban and killed the program in early January 1963. Duntov's only possible response was to sneak two of the already-built Grand Sports out to Illinois Chevy dealer Dick Doane and Gulf Oil's Grady Davis. Davis, particularly, achieved some success in 1963 running his Grand Sport driven by Dr. Dick Thompson in SCCA C/Modified including a win at Watkins Glen in August with a modified production fuel-injected engine.Duntov now took his greatest risk, entrusting three Grand Sports to Texas oilman John Mecom's team to be driven by Jim Hall, Dick Thompson, Roger Penske and Augie Pabst in the December 1963 Nassau Speed Week. They proved their point by finishing third (Penske), fourth (Pabst) and sixth (Thompson) in the feature Governor's Cup race for sports-racing cars. Penske's Grand Sport was headed only by the Scarab of A.J. Foyt and the Ferrari 250P of Pedro Rodriguez.Emboldened by the Grand Sports' success in Nassau and the absence of any reaction from management, Duntov began to lay plans for Daytona and Le Mans in 1964. Two of the Grand Sports, chassis number 001 and 002, were transformed into roadsters with low windshields to reduce frontal area in hopes of higher terminal velocities on these high speed tracks. The effort, however, was futile. Once again GM management pulled the plug, informing Bunkie Knudsen in no uncertain terms that Chevrolet's support of racing was to end.Chevrolet parceled the three coupes out to established teams: Dick Doane, Jim Hall who entrusted it to Roger Penske, and Grady Davis who in turn passed it on to Delmo Johnson. The two roadsters remained within GM until 1966 when they were updated with all the changes and revisions incorporated in the three coupes before being sold to Roger Penske. Penske entered 001 at Sebring in 1966 with power from a 427 cubic inch Mark IV big block. Driven by Dick Guldstrand and Dick Thompson it was forced off the course, damaging its frame and suspension and holing the oil pan to end its run in the early afternoon.Corvette Grand Sport Chassis 002 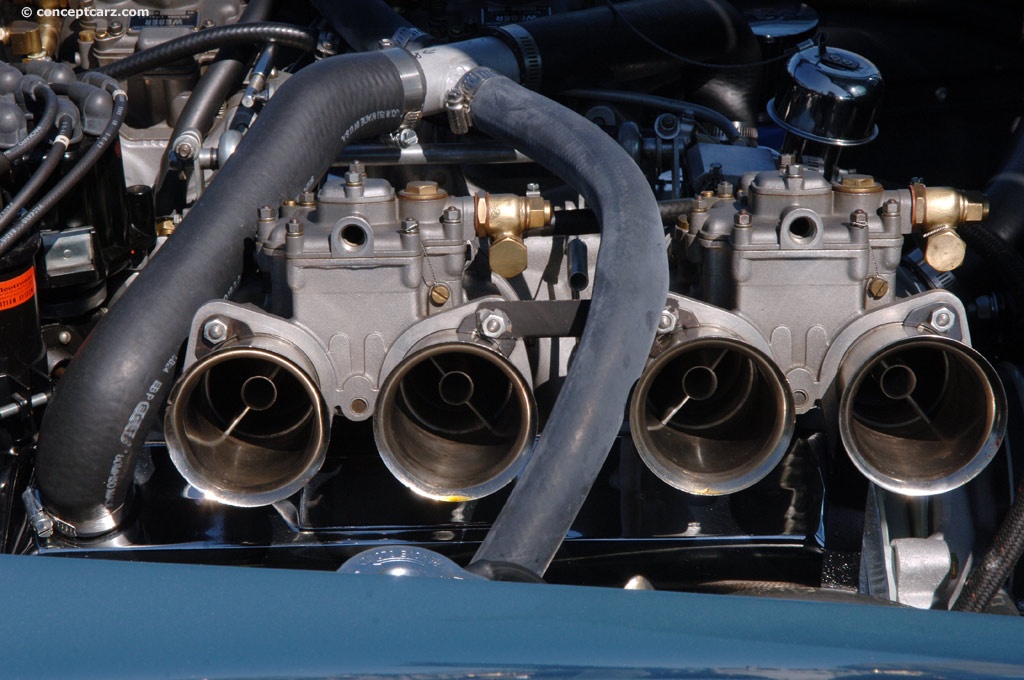 1963 Chevrolet Corvette Grand Sport Lightweight's that have appeared at auction but did not sell.