Sold for $582,500 at 2020 RM Sothebys : Amelia Island Auction.
In 1907, when horses were still the preferred mode of travel and automobiles were loud, smelly and unreliable, Henry Royce and C.S. Johnson of Rolls-Royce, Ltd., unveiled a one-of-a-kind, silver-plated, whisper-quiet 40-50 horsepower legend, the 'Silver Ghost.' Up to 1906, the most powerful engine Rolls-Royce had ever produced was a 30-horsepower, six-cylinder giant - woefully underpowered considering its seating capacity; there was room to ferry the entire family to the countryside for a Sunday afternoon picnic. But the 1940s-50s as they were known, were different. With a body balanced high over a silky-smooth transverse leaf spring and a drive train powered by a huge but silent seven-liter, six-cylinder inline-block, the Silver Ghost broke world endurance and mileage records - almost 24 mpg for a two-ton car - on a 15,000-mile run. Today, certain Silver Ghosts have yet to be retired; one odometer currently reads over 500,000 miles. The current owners of this example have driven the car over 20,000 miles since acquiring it in 2001.This 'parallel bonnet' Silver Ghost was produced prior to World War I and was dispatched from the factory to the British coachbuilder, Barker. It received a high-sided torpedo phaeton body and hen shipped to original owner Dr. Frank Tidswell of Sydney, Australia. While in his care, the car was used sparingly, with factory records indicating that he had Rolls-Royce update it with a full electric starting system in the 1920s.By 1957 it was in the care of J. Andrew of Nowra, New South Wales. At the time, the chassis and drivetrain were largely complete but the body beyond salvation. In 1968 it was acquired by South Australian Derek Hartley, who completed the restoration with a new body along the lines of the famous Maharaja of Mysore Silver Ghost. It later returned to the United Kingdom and in 1984 was sold to Peter Harper of Cheshire. W. K. Handcock of Northumberland purchased it in 1987.
In 1991 it was acquired by a new British caretaker who treated it to a restoration to its original configuration. The torpedo phaeton body was recreated using Barker design drawings with the work handled by the modern coachbuilding firm of Wilkinson. The chassis and engine were also freshly restored at the time along with various subtle upgrades employed. A larger carburetor was installed along with high-compression pistons, an overdrive, power steering, and larger rear brakes.
After the work was completed, the Silver Ghost was used on tours and rallies, including the 1993 reenactment of the Alpine Trial.After the current owners acquired the Silver Ghost it was refinished in its current color scheme of deep blue with button-tufted burgundy leather upholstery. 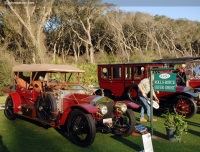 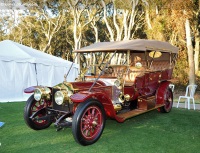 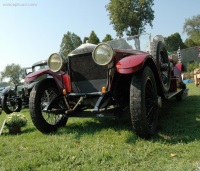