Sold for $51,700 at 2009 Automobiles of Arizona.
Of the 'Three Ps', consisting of Packard, Peerless and Pierce-Arrow, only Packard emerged from the Great Depression. Part of their survival was due to the strength of a line of medium-priced cars introduced in 1935. The new 'Clipper' styling in 1941 helped elevate sales, such that the more traditional 'Senior' series was dropped after World War II.By the close of the 1940s, there was very little to distinguish the top-of-the-line Custom Eight models from the standard Packard Eights. This would change in the years that followed with the help of James Nance, the new president who arrived from appliance manufacturer Hotpoint in 1952. His strategy was to make distinguishable features between the entry-level Packards, and the top-level cars. Part of his plan was a separate marque name which was never fully implemented. The top-line Patrician series had longer wheelbase, more elegant trim and a line of Executive sedans by Henney Motor Company, the professional car builders. The Clippers, on the other hand, had simple trim, smaller engines and fewer amenities. The upper-mid-level series called simply 'Packard' was a new Caribbean convertible.
The Caribbean was modified by Mitchell-Bentley Corporation, and had full leather interior, chrome wire wheels, enlarged wheel openings, custom paint in one of four hues, and hood scoops.
For 1955, great changes were made to the Packard line. The bodies were given distinctively different appearances, and Packard introduced their first V8 engine, available in two sizes. The Caribbean continued as part of the Series 5580 Packard line. With the exception of air conditioning, the Caribbean was fully optioned. Power was from the larger 352 cubic-inch V8 with dual Rochester four-barrel carburetors, and the new electrically-operated Torsion Level suspension was standard.This particular Packard Caribbean Convertible was purchased in 1985 from David Cummings of Blairsville, Pennsylvania. It was given a full bare-metal repaint in 1986 consisting of red, white and black. The odometer shows just 50,666 miles since new. In 2009, this Commodore Six Convertible was offered for sale at the Automobiles of Arizona auction presented by RM Auctions. The car was expected to sell for $60,000 - $80,000 and offered without reserve. As bidding came to a close the lot had been sold for the sum of $51,700 including buyer's premium.
By Daniel Vaughan | Apr 2009

1955 Packard Caribbean's that have appeared at auction but did not sell. 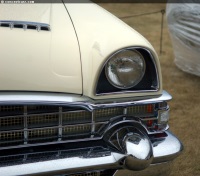