Touring would go on to produce chassis 0081S. This was a truly unique 195. It would boast of features and elements not included on the other two chassis Touring had completed. This specific car, chassis 0081S, would be prepared for the Torino Auto Show in 1951.The chassis would sport Touring's signature work of a fastback design sporting large windows and narrow pillars to provide ample light and visibility. While the body-styling remained similar to its other creations, the nose would sport some changes only to be seen on this one chassis. On this one particular car, the nose would undergo some changes. The position of the headlights would be altered. It would also be void of any other headlights. This gave the front of the car a very clean and tasteful look. Another simple difference included the use of a small amount of chrome to accent the grille. The design would draw of the emotion of rest and peace more than on the raw performance the car was capable.The car would be completed with a luxurious light metallic gold. The interior of the car would end up being tastefully upholstered in light cloth with contrasting vinyl. Inside and out, the car is simple and elegant. Its richness would result from its simplicity and craftsmanship.
The design of the 195 Inter would end up being a winner. Of course, having the Colombo V12 under the hood certainly helped the sales of the car, which would 27 would be built in just one year. However, the 195 Inter designs that would be seen in Paris in Torino wouldn't end up being what the customers would receive. Most of the coachwork for the 195 Inter would shift to rival coachbuilders Ghia and Vignale. Therefore, the first three prototypes of the 195 would end up being especially rare as they would end up being the only Touring-bodied 195s. And among the three, one would stand out amongst the other two.
That particularly special one of the three, the car that would be especially built and would be displayed at the Torino Auto Show would again be on display at Gooding & Company's auction at Pebble Beach in August of 2011.After sharing the spotlight of the Torino Auto Show, 0081S would end up being sold a month later of Giuseppe Fiocchi. The Fiocchi name is immediately recognized with the Fiocchi Ammunition family. The car would remain the property of Fiocchi for three years.

Over time, it was believed the car had been lost. But it hadn't. It had only been in hibernation, quietly locked away in a garage. It wouldn't be until 2006 that the car would again be seen. Tom Shaughnessy of Oceanside, California immediately recognized what he saw and would purchase the car. What he would purchase; however, was a project that would need a lot of time and work. The work would end up being a little too much and the car would again be sold in 2007. Its owner, an enthusiast with an already impressive collection of sports and racing cars, would immediately contact Terry Scarborough Racing. He would be given the task of restoring the car to its former show car look.Despite the years, much of the car would remain original and rather unharmed. The car would include original body stampings and would include other such original features as original gauges, steering wheel, trim pieces and windshield wipers and lights. The car would even include the original carpets and upholstery. When it was all said and done, the car would earn the Platinum Award at the famed Cavallino Classic in Palm Beach as well as the La Bella Macchina trophy. Its other awards would include a Best in Class award at the Palo Alto Concours d'Elegance and a Best in Class award at the San Francisco Presidio Concours event.Being an extremely rare and authentic Touring-bodied 195 Inter and a Best in Class award winner, the car would go on to earn $990,000 at this year's auction.Sources:
'Lot No. 26: 1950 Ferrari 195 Inter Berlinetta', (http://www.goodingco.com/car/1950-ferrari-195-inter-coupe). Gooding & Company. http://www.goodingco.com/car/1950-ferrari-195-inter-coupe. Retrieved 23 August 2011.
Wikipedia contributors, 'Ferrari 195 Inter', Wikipedia, The Free Encyclopedia, 22 July 2011, 07:18 UTC, http://en.wikipedia.org/w/index.php?title=Ferrari_195_Inter&oldid=440791411 accessed 23 August 2011
By Jeremy McMullen

Sold for $429,000 at 2007 Monterey Sports and Classic Car Auction.
Sold for $990,000 at 2011 Gooding and Company - Pebble Beach Auctions.
Sold for $1,083,208 (€900,000) at 2017 RM Sothebys : Ferrari - Leggenda e Passione.
Ferrari 195 Inter Coupe Berlinetta with chassis number 0081S was created near the close of 1950. It is a right-hand drive vehicle and was originally finished in gold paint. It was given a body by Touring and shown at the 1951 Torino Salon. The car has passed through several owners before coming into possession of its current owner. It was shown at the 2007 Cavallino Classic in very unrestored condition. The paint is non existent. There are no windows and most of the interior panels have been removed. The gears that crank up the window are visible and probably not in working condition; either way, there is no glass. The seats are torn, dirty, and show their age and lack of care throughout the years. There is a front and rear bench seat which appears to be capable of carrying four to five passengers. There are places in the floor board that have been rusted away and now the ground is visible. Bungee cords are used to secure mechanical components on the bottom of the car, probably the exhaust system. There is a spare tire in the trunk of the car that looks to be original and still retaining most of its tread. A single exhaust pipe sticks out the rear middle of the car. Looking under the bonnet, though, is a different story. The chrome is shiny and appears to be recently restored. It carried the car and its passengers onto the upper concours lawn of the Cavallino Classic. As the car gracefully rolled up the beautiful driveway of the Breakers Hotel, it appeared to be in fine running condition and the driver seemed to be enjoying the experience thoroughly. The final view of the car as it rolled on past and onto the lawn was of the blue tape covering the rear brake lights.Later in 2007, it was brought to the Monterey Sports & Classic Car Auction presented by RM Auctions, where it had an estimated value of $400,000 - $600,000. After enthusiastic bidding, the lot was sold for a high bid of $429,000 including buyer's premium.Ferrari built just 25 of these 195 Inter models in late 1950 and 1951 and this car (serial number 0081 S) is the first one. It follows the design and specifications of the road-going 166 Inter. The 195s were powered by a V-12 engine displacing 2.3-liters, and were bodied by Touring, Vignale, and Ghia. Originally painted gold, this car was featured by Touring at the 1951 Turin Salon in Italy.
By Daniel Vaughan | Nov 2011 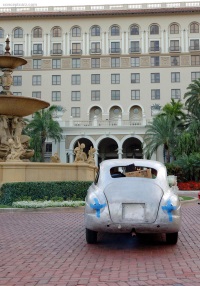 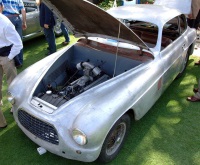 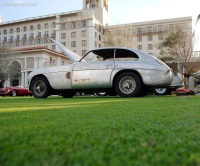 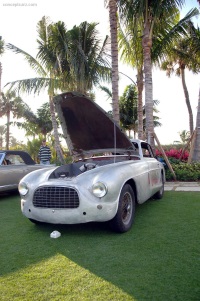 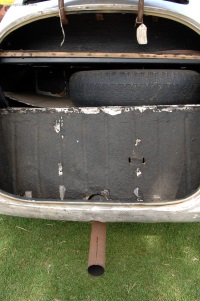 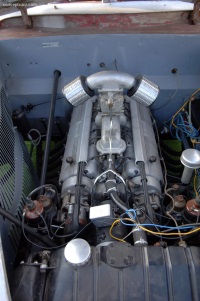 Recent Sales of the Ferrari 195 Inter

Ferrari 195 Inters That Failed To Sell At Auction

1950 Ferrari 195 Inter's that have appeared at auction but did not sell. 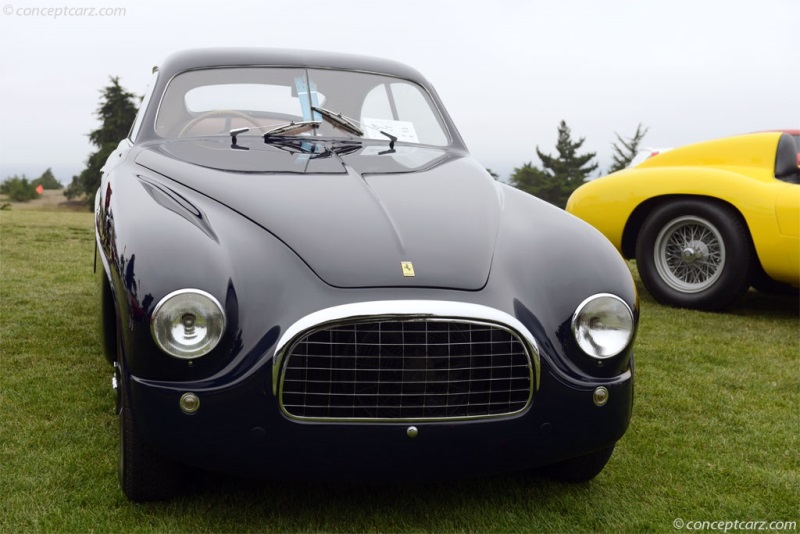 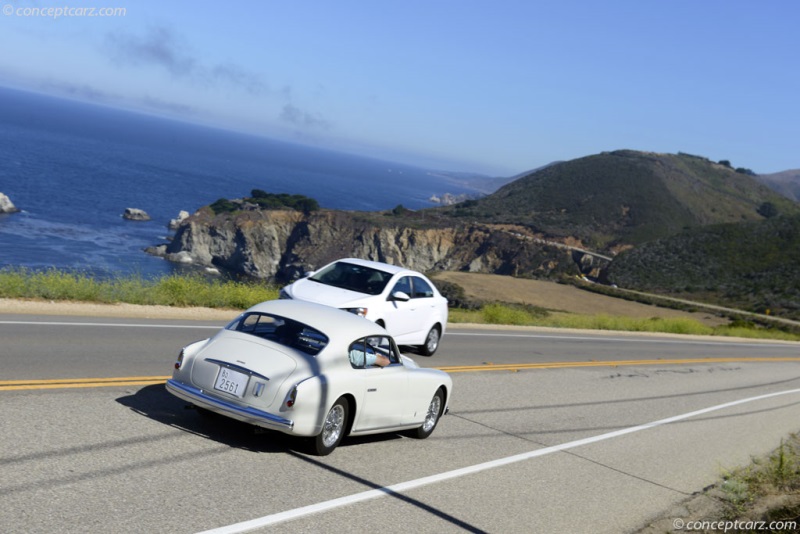 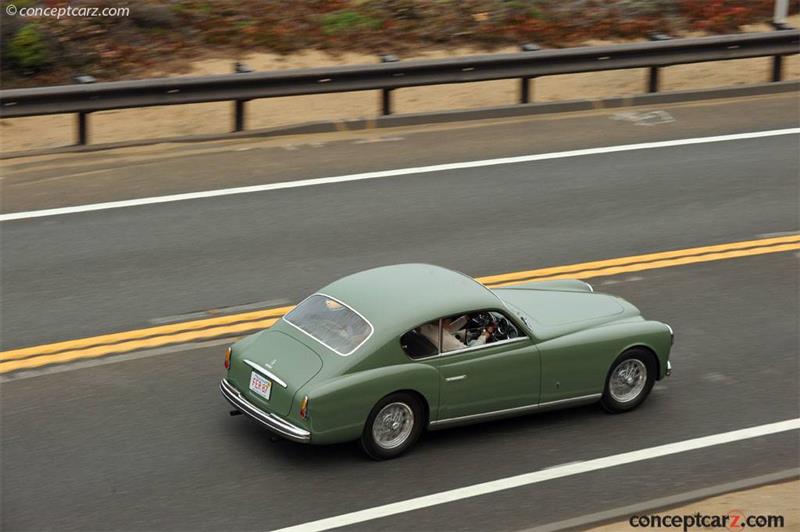