In late 1963, Ken Hablow of Chestnut Hill, MA went shopping for a strong running entry for the up and coming 12 hours at Daytona in February 1964. Hablow needed a competitive car and driver lineup, thus he found the famous Allen 'Doc' Wyllie. Doc endured much success during his racing career from Daytona to Sebring and had a 5th place finish at Sebring 1962. This car owned by Doc Wyllie was a White factory 'Big Tank' 'Big Brake' Z06. Wyllie had warned Hablow the car would need an intense shake down before entering the big endurance race at Daytona in 1964. The young and aggressive 23 year old Ken Hablow ignored the warning signs from Wyllie and entered the 12 Hour endurance race. Running as car #7 driven by Tom Rizzo and Fred Darling, the car was dramatically retired after 169 laps due to an end over end crash finally resting right side up. Luckily, Rizzo walked away virtually unscathed. Depressed, Ken Hablow tied the remains of this factory White Z06 Corvette to a trailer and headed home.

Due to the extensive damage of the White Z06, Hablow went to Linders of Worcester, MA and purchased a 1963 Daytona Blue Coupe vin 30837S103070. With the help of chief mechanic, Ken Duclos, they rebuilt the White Daytona car into the new Blue 1963 from Linders. Said mechanic Ken Duclos, 'We took this car back to MA, stripped whatever was salvageable, i.e. brakes, suspension, engine and fuel injection assembly, and the original 36 gallon fuel tank.' Thus upon its completion the Blue 1963 was now a genetically correct Z06.

According to Ken Hablow, 'We had all been quite friendly with Don Yenko going back to 1960 as we traveled the circuit as a group and Corvette owners stayed together at the tracks to help each other when necessary.' 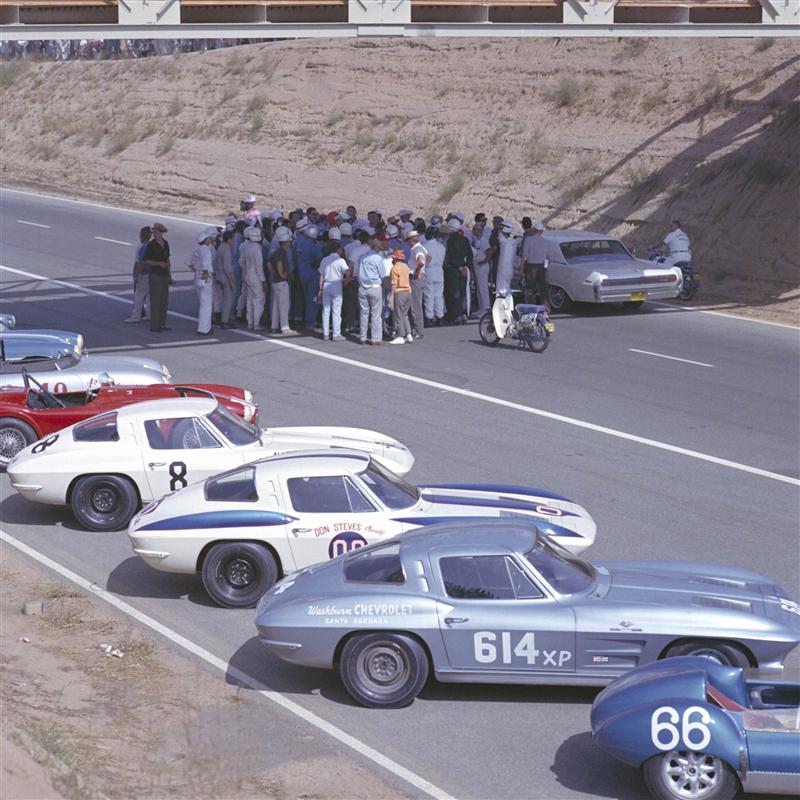 Thus Hablow hired Yenko and his close friend John Bushell to pilot this 1963 Corvette. At Daytona 1965 running as car #28, this car was forced to retire due to a water pump induced engine failure. Hablow decided he was not going to give up; he readied the car next month for the grueling 12 hours of Sebring in March 1965. At Sebring 1965, the car was raced as #61, I was probably doing 110 mph when I heard a tremendous thump. The car pitched to the right, skidded over a low curbing and that's when I heard the suspension parts as they started to snap. After fish tailing a couple of times he managed to straighten out and pull over to the right side of the course. No question the damage was severe; I had to make a decision - whether to try and make the repairs on the spot, or try and make it back to the pits on three wheels.'

John managed to make it back to pit road in an attempt to have the team make the necessary repairs; but there was too much damage. The rear brake drum and hub assembly were completely destroyed and the car was 'reluctantly withdrawn.'

Hablow wasn't finished with this car. In 1965, he hired Ken Duclos to rebuild and drive the car with a 'Grand Sport' body-kit and a new 396 cubic-inch Big Block. This car went on to become the famous car #34, the 'Golden Goose' that racked up many victories, most notably at Nassau Speed-Weeks in December of 1965. This is perhaps the first big block Corvette to ever win a major race in GT Class!

In January 2004 Lawrence Sachs acquired the 'Centerpiece' of his collection. After researching the car for 3.5 years and advertising for documentation and information, he has assembled a beautiful portfolio of information and valued memories. When John Bushell saw the film clip that Mr. Sachs acquired, he became sentimental and teary eyed and claimed, 'My God, I'm watching a distant piece of my life reappear!'

This car has undergone an extensive detailed restoration now reclaiming its life on that fateful Saturday of Sebring 1965.

The extensive restoration was completed by J.R. and Bob Amantea of Meriden, CT. The impeccable paint and detailed body work was performed with T.L.C. by Ray Zisa and the Corvette Center of Newington, CT.

The expensive, firm guidance, and irreplaceable original parts were provided by leading Z06 expert Franz Estereicher. Much appreciation for the diligent research and reproduction of decals by Steve DeVaux. A special thanks goes to Kevin Mackay for his support and consultation given to the current owner of this vehicle. Erick Kuckhoff (previous owner from 1981-2004) are also thanked for providing some original parts.Source - The Cars Owner
No auction information available for this vehicle at this time.

1963 Chevrolet Corvette Z06's that have appeared at auction but did not sell.