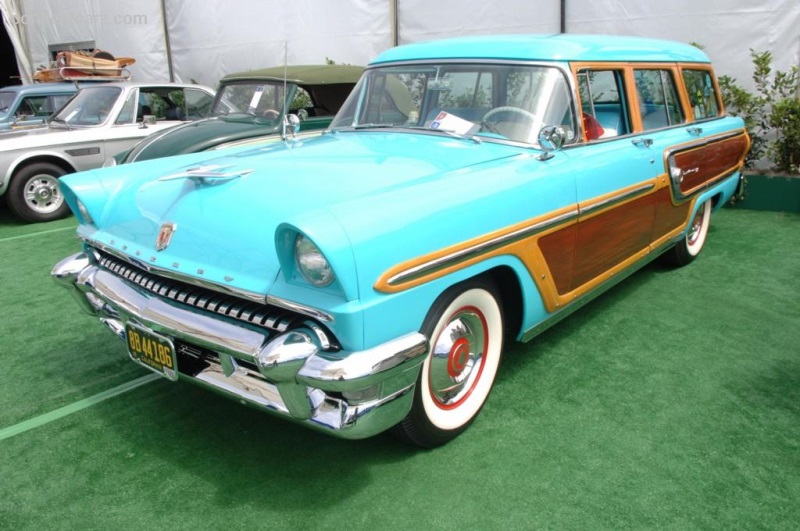 Station Wagon
Chassis #: 55LA26574M
Sold for $115,500 at 2006 Gooding & Company Pebble Beach Auction.
Sold for $50,600 at 2008 Sports & Classics of Monterey by RM Auctions.
Mercury had a record-setting year in 1955 with a total of 329,000 Mercury vehicles sold. This was the same year they split from Lincoln. Mercury offered three series in 1955, the Custom, Monterey, and Montclair. These series came in a wide variety of body styles which included sedans, convertibles, and even station wagons. Further customization was available such as engine options, air-conditioning, power equipment, and more. This 1955 Mercury Monterey Woody Station Wagon was offered for sale at the 2006 Gooding & Company Auction held in Pebble Beach, Ca. It was estimated to sell for $60,000-$80,000 and was offered without reserve. It is powered by an eight-cylinder engine that displaces 292 cubic-inches and produces just under 190 horsepower. It has a three-speed 'Merco-Matic' automatic gearbox and came is equipped with many factory options. The Monterey Station Wagon was Mercury's most expensive vehicle in 1955 costing the buyer $2845. Included in the price were power steering, brakes and seats. A radio also accompanied the vehicle.
The car has recently been treated to a complete restoration which took over three years. The vehicle is finished in turquoise with wood trim. The interior has three seats which makes it one of the rare vehicles to be equipped with the rear seat.
At auction, the true beauty of its restoration and history was rewarded by the sale of the vehicle being driven well above the estimated value. When bidding concluded, the car ad been sold for $115,500.
By Daniel Vaughan | Feb 2007

1955 Mercury Monterey's that have appeared at auction but did not sell.