High bid of $250,000 at 2016 Mecum : Monterey. (did not sell)
This Volkswagen Hebmüller Type 14A Cabriolet is one of just 696 examples produced in model years 1949 through 1953. After Heinz Nordoff was appointed Managing Director of Volkswagen in January of 1949, one of his directives was to build a two-seater 'Roster.' Karmann was instructed to build a true four-passenger Cabriolet. Hebmüller, a small coachbuilding firm located in Wuppertal, Germany, began work on developing a 2+2 Roadster Cabriolet with two front bucket seats and an occasional fold down/fold up seat in the rear compartment. It had a full Cabriolet style top that was given roof insulation, a tailored headliner and a glass rear window. In the back was an elongated rear deck lid, and had a reshaped rear cowl with cooling air vents. The turn signal semaphores were placed in the side cowl area adjacent to the front fender. The inside was well appointed with a removable Telefunken Radio, a picnic accessories kit and a porcelain flower vase for the dashboard. The completed body rested on a standard Volkswagen pan and featured the same mechanical components. Heinz Nordoff approved the Hebmüller Cabriolet for production in April of 1949. An initial goal of 2000 examples were to be produced, bearing the name of Volkswagen Hebmüller Type 14A Cabriolet. Production began in June of 1949. A short time after production had begun, a fire originating from the paint shop burned some of the cars and damaged other areas of the factory. The factory was able to be repaired and took just a few weeks to complete. Production of the Hebmüller Roadster continued into 1950.
The fire had been detrimental to the Hebmüller coachbuilding firm, not only for the property damage, but also financially. The company was uninsured for the fire damage, plus they were suffering from a sluggish German post-war economy. At the end of 1950, the company was forced to declare bankruptcy. At the time, a total of 696 units were accounted for: 682 'Volkswagen Hebmüller Type 14 A Cabriolets' had been completed and the remaining parts for building an additional 14 cars would be sent to Karmann for completion.
It is believed that fewer than 100 examples remain in existence. The owner of this early Volkswagen Beetle Convertible spent 10 years locating original parts and researching the history of this car for its restoration. The green and cream over Cognac car has not been shown for three years, but prior to that it appeared at the Art Center and the Quail, and it has been featured in Auto Aficionado magazine. As a 1949 model, this car is representative of the initial output of Volkswagen's revitalizing Wolfsburg factory after the war, when the capture facility restarted, initially under British Army control.

Recent Sales of the Volkswagen Beetle

Volkswagen Beetles That Failed To Sell At Auction

1949 Volkswagen Beetle's that have appeared at auction but did not sell. 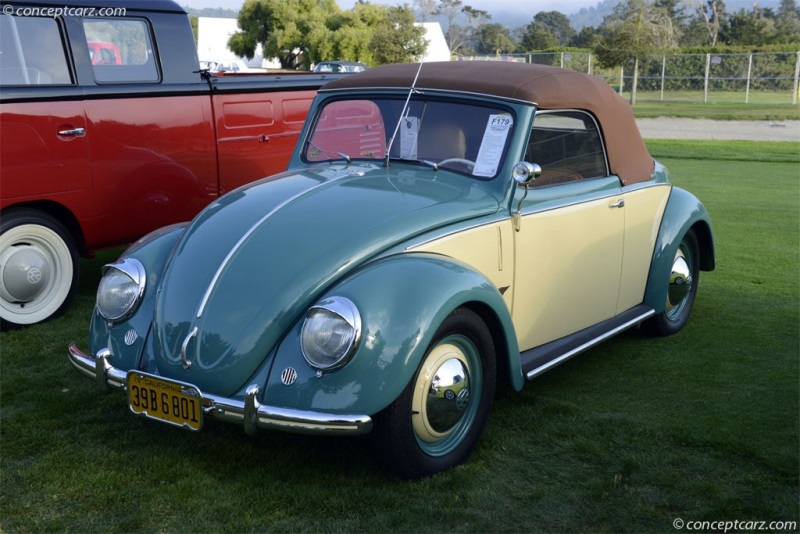