Bearing the style number 4086, it is believed this particular car was the first of just two bearing the style number over the course of Packard's 1939 production run. Not surprisingly, this car would end up in Los Angeles as one of the most expensive models ever to be produced and in the hands of Earle C. Anthony, the 'dealer to the stars'.While there are many details that are certain, there are some other stories that remain a legend. One of those includes the theory the car's first owner was none other than actor and bandleader Ray Noble. Putting legend behind, the Touring Cabriolet would end up in the hands of Sam DelRusso Sr. DelRusso would own the car for a number of years, but then, it would end up the property of Robert Castignetti of Massachusetts. Following a period of time with Castignetti, the Touring Cabriolet would move on to become a part of Richard and Linda Kughn's collection.
Besides the legends, there would be some other details of the 1939 Packard Twelve Touring Cabriolet that would set it apart from the rest of the herd. Some of those exclusive details would include a column-shifted transmission, walnut accents throughout the interior, dual side-mounted spares, an external folding trunk rack, and the See-Rite side-view mirrors. But then there were the dual-tinted 'Neutralite' skylights positioned above the windshield. These were unique Brunn innovations.
Boasting a semi-collapsible top and folding rear portion, this Packard was is a true Touring Cabriolet providing all passengers with a special motoring experience. One of the final 'catalogue customs', this 1939 Packard Twelve is certainly exquisite inside and out. Filled with delicate touches and quite unique features, this Packard Twelve Touring Cabriolet is beyond rare. The 175bhp V-12 engine, column-mounted shifter and the other Brunn impressions all help to tell a story that needs no legends or myths. It is a story of exclusivity and striking a chord through mechanical art. This 1939 Packard Twelve Touring Cabriolet, with its body by Brunn, would be a part of RM Auctions' 2014 Hershey event. Highly original and considered well-preserved, the car would draw pre-auction estimates ranging from between $130,000 and $160,000. In the end, the car would find a new owner garnering a sale price of $143,000.By Jeremy McMullen

Sold for $166,100 at 2009 Vintage Motor Cars of Meadow Brook.
Sold for $123,750 at 2013 RM Auctions - St John's.
Sold for $143,000 at 2014 RM Auctions - Hershey.
There were just 446 Packard Twelves built in 1939 and the Brunn Touring Cabriolets numbered in single digits. They were the priciest Packards, selling for $1,500 more than the most expensive Rollston Town Car. This Brunn Collapsible Touring Cabriolet is body number 1 and is a largely original car. The original owner (believed to have been British-born bandleader and composer Ray Noble) purchased the car from Earle C. Anthony, the legendary Los Angeles distributor. The exterior of the dark is painted in black and all the exterior brightwork is in good condition. There are wide whitewall tires, twin side-mount spares, with hardcovers coupled with a commodious trunk and an external folding trunk rack. The interior is tan cloth with walnut accents in the passenger compartment. There is an optional column shifter and an L-head V12 engine offering 175 horsepower.
In 2009, this car was brought to RM Auctions 'Vintage Motor Cars of Meadow Brook' where it was estimated to sell for $175,000-$225,000. As bidding came to a close, the lot had been sold for the sum of $166,100, including buyer's premium.
By Daniel Vaughan | Sep 2009

1939 Packard 1708 Twelve's that have appeared at auction but did not sell. 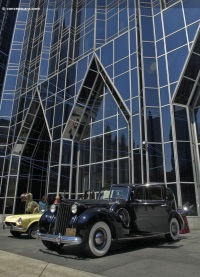