The most famous of all Derby Bentleys, this experimental, one-off automobile is nicknamed for the man who funded its creation in the mid-1930s: Andre Embiricos, a Greek shipping magnate and race driver living in Paris. It seems Mr. Embiricos was a Bentley admirer who wanted even higher performance and more modern beauty for his new Grand Tourer Bentley. The trend of streamlined aerodynamic coachwork was especially strong in France, with noted designer George Paulin and coachbuilder Pourtout Carrossier of Duralumin at the forefront. It was their collaboration with Embiricos which culminated with this sleek, lightweight aluminum alloy fast-back coachwork fitted to a 4.25-Litre Derby Bentley. Finished in 1938, it was everything the financier had asked for: state-of-the-art, beautiful, light and fast.At the time, Paulin was one of France's leading aerodynamic designers; he was very conscious of the wind-cheating efficiencies that could be created through form, and often comfort was sacrificed to obtain a body shape as near as possible to the aerodynamic ideal.
The coachwork, designed by Georges Paulin, was built by Marcel Pourtout. Comfort was sacrificed in order to obtain a shape as near as possible to the aerodynamic ideal. This 4.25 Litre Bentley was fitted with a high ratio back axle and a four-speed gearbox with overdrive, which suited Europe's increasingly fast road network.
Embiricos lent the car to Walter Sleator of Franco-Britannic Automobiles, the Rolls-Royce and Bentley agent in France, for testing on the new German Autobahn network, and the car set records for speed and road-holding there that no Bentley road car had previously come close to achieving. It was clocked at 114.64 mph (184.5 km/h) for over an hour at Brooklands before World War II prevented further racing. After having driven 100,000 miles, this car then competed in the 24 Hours of LeMans in 1949, 1950 and 1951. Its best result at LeMans was a sixth place finish in 1949 when driven by Soltan Hay and Tommy Wisdom.More recently, the car has appeared and received awards in numerous concours', including Pebble Beach and Meadowbrook. The Kellers drove it in the 1994 Monte Carlo Rally des Voitures Anciennes; in 2012 it ran the Louis Vuitton Classic Serenissima Run in Venice; and was featured in the Le Mans Classic and displayed in the Bentley Pyms Lane Factory 'Lineage Showroom.' 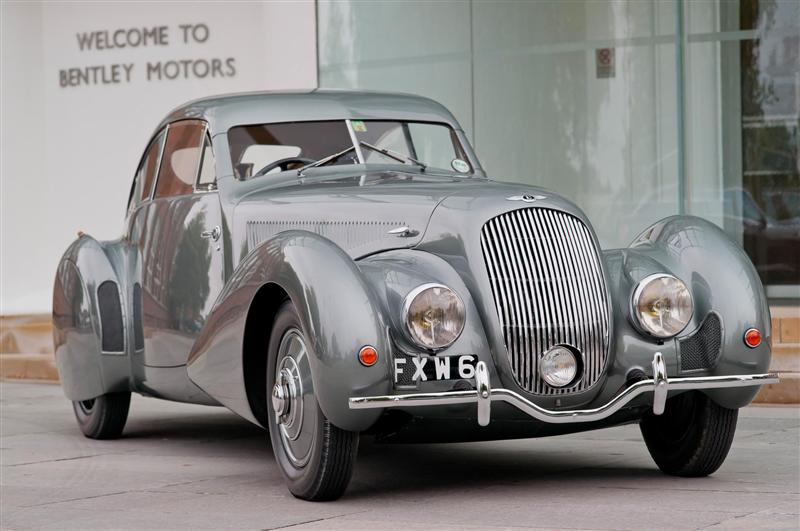 One of the rarest and most valuable Bentleys in the world, the 4¼-Litre 'Embiricos' special, is making an historic appearance at the marque's home in Crewe. Fresh from taking part in the Louis Vuitton 'Serenissima Run' in Venice and featuring at the Le Mans Classic as part of the Bentley lineup, this magnificent car takes pride of place in the Lineage Showroom at the firm's Pyms Lane factory until September.

Throughout the 1930s Bentley Motors, then owned by Rolls-Royce, was producing fast, refined and well-built Grand Tourers from its Derby factory. While many customers sent their chassis to traditional coachbuilders such as Vanden Plas, H.J. Mulliner or Park Ward for elegant bodywork, enthusiasts from across the Channel, where the roads were longer and faster, were eager to explore the new world of aerodynamics. With the support of the factory, one such owner decided to investigate the possibility of a streamlined high-performance Bentley. The result was the most famous Bentley of the Derby era.

André Embiricos was a wealthy Greek racing driver living in Paris. Walter Sleator, the company's Paris agent, put him in touch with Georges Paulin, a designer working for coachbuilders Pourtout Carrossier. Únder Paulin's guidance Pourtout produced a strikingly sleek, aerodynamic body for a 4¼-Litre Derby Bentley that would be suitable for fast touring and track records alike. To keep weight down the fastback body with split rear window was crafted in Duralumin, an age-hardenable aluminium alloy.

The 'Embiricos' Bentley fulfilled all the criteria for a Bentley high performance grand tourer, achieving a timed 114.64 mph (184.5 km/h) over an hour at Brooklands, yet being civilised enough for Embiricos to use as a road car. Embiricos sold his unique Bentley late in 1939 to H.S.F. Hay who raced it in three post-war Le Mans 24-hour races, achieving a commendable 6th place in 1949.

Although a one-off, reaction to the Embiricos Bentley encouraged the company to explore more streamlined styles for future production models. In 1939 Bentley designer Ivan Evernden worked with Paulin on a sleek Mark V prototype called Corniche. Únfortunately it was in France when WWII broke out and destroyed during a bombing raid on Dieppe while awaiting shipment to Britain. Post-war, many of the lessons of the Embiricos Bentley reached fruition in the glorious lines of the 1952 R Type Continental, and as such continue to be reflected in the iconic shape of today's Continental GT coupe.

Richard Charlesworth, Director of Royal and VIP Relations and Head of the Bentley Heritage Collection, commented:

'It is an honour for Bentley to exhibit this unique Bentley for the first time, thanks to the generosity of its esteemed owner. Its sleek form was extremely advanced for the time, and its DNA can still be seen in modern Bentley coupes today. We are looking forward to showing the Embiricos to our factory visitors, and to the public at the upcoming Windsor Castle Concours of Elegance.'Source - Bentley
No auction information available for this vehicle at this time.