Sold for $3,520,000 at 2009 The Scottsdale Auction : Gooding & Company.
While there have been a number of cars to wear the dashing lines of a tear drop, only a few were set apart by the special chassis that served as a foundation for their entrancing bodywork. These mythical cars are known as the T 150 C SS. The T150 C began as a pure racing car with the 'C' designation signifying 'Corse.' The shortened SS chassis was a clever design by Vincenzo Bertarione featuring an engine tuned by Lucien Girard. The chassis was rugged and handling was balanced and predictable with the inline six-cylinder providing an outstanding performance, smoothness and a surprisingly thrifty fuel economy. The T150 C had considerable competition success, coming third at the 1938 Le Mans 24 Hours, winning the Tunis Grand Prix, finishing in the top two positions in the Tourist Trophy and sweeping the all-important French Grand Prix in 1937. With slight modifications, it is this chassis that formed the basis of the magnificent road car, imbuing one of the most stunning automotive designs with sufficient substance and a thoroughbred pedigree. Mounted on this excellent platform is the highest example of coachbuilder's art. The Figoni et Falaschi body is widely considered to be the definitive design of its era, displaying ideal proportions, alluring details and faultless forms. The Tear Drop was the epitome of a modern Europe, embodying the qualities of speed, aerodynamic prowess and good taste. As legendary automotive designer and historian Strother MacMinn once said, 'The Talbot Tear Drop Coupe represents what may be one of the finest examples of assembled form applied to the automobile.' High praise indeed.

This Tear Drop, chassis 90105, is the fourth of a mere 14 T 150 C SS chassis built and one of only a handful of the desirable New York models ever produced. The New York models are considered to be the most spectacular and cohesive examples of the Tear Drop – the identifiable example of this landmark design. A distinctive car from new, this was the only Tear Drop to be constructed without a sunroof, giving the car an even purer and more purposeful shape than the cars fitted with this option. To offset the ventilation issues of this unique configuration, a concession was made to fit the car with twin outward-opening windscreens for necessary ventilation – a unique Joseph Figoni patented design that further enhances the character of this car.

While the first registered owner of this car is unconfirmed, it is believed to have been briefly used by Frederic McEvoy, the 1937 world bobsleigh champion and double Olympic gold medalist. Mr. McEvoy was a luxury-car dealer who was associated with chassis 90103, and it is believed that he may have initially used this car, chassis 90105, for promotional purposes. At the time it was registered in Paris as '9187 RL 3.' A period image of the car, identifiable by the lack of a sunroof, shows it wearing this registration. Despite its initial stay in France, the car was destined for American shores as evidenced by the round laurel wreath badge, a feature designated strictly for export cars. 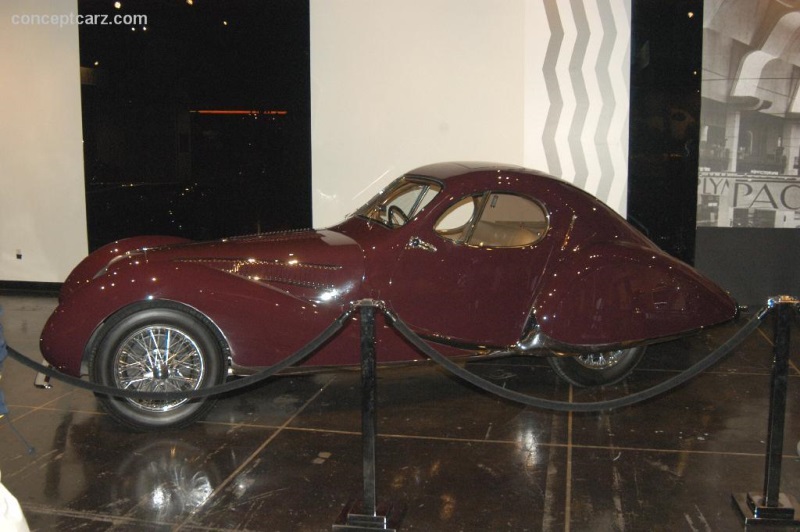 In 1939, Thomas 'Tommy' Lee, the son of wealthy West Coast Cadillac dealer Don Lee, ensured that the car's destiny would be fulfilled when he purchased this Talbot-Lago through famed distributor Luigi Chinetti who had only recently left Italy for France during the rise of Mussolini's fascist government. Mr. Lee, the consummate enthusiast and playboy, shared his father's passion for exquisite automobiles and began to amass an outstanding collection of the finest sporting cars, even creating special one-off cars to suit his particular tastes and needs. His stable at one time included a similar Tear Drop, chassis 90107, which was constructed for the Maharani of Khapurthala; three Alfa Romeo 8Cs, including two 2.9s; one of the earliest Ferrari 166 Barchettas; and countless coachbuilt American customs, Bugattis, Lagondas and Mercedes-Benz automobiles. Of all those cars, this Tear Drop was his preferred and most frequent driver.

Longtime personal mechanic to Mr. Lee, Bud Stump, recalled his employer's ebullient reaction to this particular acquisition and the Tear Drop remained in Los Angeles for the next decade. During that time, the car was enthusiastically campaigned and became well known in Los Angeles for terrorizing the local boulevards in impromptu street races, a rather incongruous use for such a dignified automobile. On several occasions, the car was taken to the nearby dry lakes east of Los Angeles where it was seen competing in speed trials against other exotics and recently developed hot rods – all while in stock form. Beyond its exploits at the dry lakes, Mr. Lee took advantage of the thoroughbred chassis of the Tear Drop, and the car war seen racing around the local road courses.

The presence of the Tear Drop in Los Angeles in the late 1940s would have been a tremendous influence on the growing number of aspiring hot-rodders and customizers. The Talbot-Lago's genius combination of Figoni's aerodynamic groundbreaking design and tested high-performance mechanicals served as the image of the ideal machine. Soon after the Tear Drop appeared in Los Angeles, a number of swooping, enclosed customs were created, taking cues from the Talbot and other great European cars. This new generation of customs featured exaggerated concepts from the Talbot, including wildly louvered bonnets, voluptuous fenders, flared headlights and small, stylized windows.

Sadly, Mr. Lee's exploits caught up with him and he was badly injured in an accident, in another car, that left him with chronic pain so great that eventually, in January 1950, he took his own life. After his tragic death, Mr. Lee's prized Tear Drop was consigned to International Motors, a famous Los Angeles-based exotic-car dealership operated by Roger Barlow. The car was purchased from Mr. Barlow by a Mr. Neal, later being sold to Ralph Knudsen of Milwaukee, Wisconsin.

In 1950, this car caught the eye of renowned industrial designer Brooks Stevens. Stevens was famous for his iconic American designs and well known for his work with Studebaker and Harley-Davidson as well as his one-off Scimitar All-Purpose sedan. (concept carz) He was also responsible for the Oscar Meyer Weinermobile, Skytop Lounge passenger trains, the Miller High Life soft-cross logo, the Steam-O-Matic iron and Allis-Chalmers tractors. Mr. Stevens spotted the car in front of a local restaurant and after tracking Mr. Knudsen down, persuaded him to sell the car so he could add it to his growing collection of significant automobiles. In 1968, an Alfa 8C 2.9 Spider formerly owned by Tommy Lee joined the collection, and both cars continued to share the same garage for many years to come.

Not simply content with the world of design, Mr. Stevens also had a passion for motor sport and by the end of the year he had entered the car in the Grand Prix at Watkins Glen. This competition outing was documented in a 1957 article in Road & Track. Wearing the number 115, the car was admirably driven by Jim Floria and finished 11th overall, a true feat considering that it had been over two decades since the car was built and, furthermore, the Talbot ran entirely unmodified for competition use. Later, after campaigning the car at a local race in Wilmot Hills, Wisconsin, Mr. Stevens decided that it would be best to retire the Tear Drop from competition.

In addition to having one of the finest automobile collections of his time, Brooks Stevens is perhaps best remembered for coining the phrase 'planned obsolescence,' famously defining the term as 'instilling in the buyer the desire to own something a little newer, a little better, a little sooner than is necessary.' Despite this, Mr. Stevens was a passionate caretaker and preservationist with regard to his beloved Talbot-Lago, which he considered a milestone in automotive styling and modern design. There would be no desire for anything newer, better or sooner. In fact, were it not for his museum curator's hasty decision to repaint the car while Mr. Stevens was away in 1979, this Talbot would almost certainly still wear its original metallic blue livery. The car was kept in his automotive museum in Mequon, Wisconsin, until his passing in 1994. It was then sold to renowned collector Bruce Lustman who had the car sympathetically returned to its original mechanical specifications, as some minor modifications had been made for its later competition endeavors. Since Mr. Lustman's ownership, the car has had only two caretakers. Other than the minor work, it has been preserved as it had for the previous decades and is said to perform superbly. 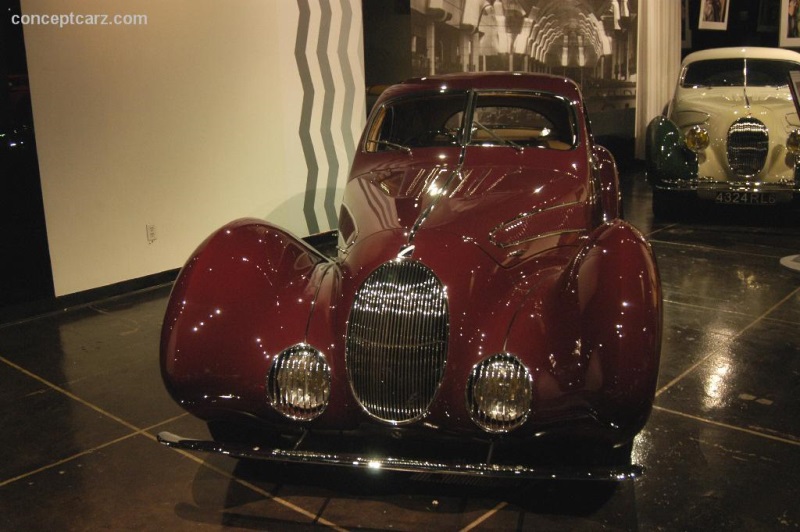 The history of this car is well known and fully documented since its arrival in Tommy Lee's stable in 1939. It is featured prominently in Richard Adatto's comprehensive work From Passion to Perfection, regarded as the definitive survey of French aerodynamic cars of the 1930s. More than 70 years after its construction, it still remains exceptionally original, retaining all of its impressive Figoni et Falaschi coachwork and presented with a beautifully preserved leather interior. The patina evident throughout this car is immensely attractive and is clearly the result of careful use and a good deal of attentive care over the past 72 years. According to Mr. Adatto, the Tear Drop retains all of its original running gear, engine, gearbox and axles. It also has such precious details as the original Marchal headlamps and the original headliner with its unique hatched material. Even the trunk lining and the cross-hatched chrome trim along the trunk lines are still present. This is one of the most spectacular and significant automobiles ever built and a car that has been cherished by automotive connoisseurs from new. With its remarkable, unblemished history, timeless design, exhilarating performance and unquestionable originality, this automobile deserves special consideration. It has never suffered the ravages of unsympathetic restorers. There are simply not enough superlatives to describe this Talbot-Lago, and its significance to automotive history cannot be sufficiently emphasized.
Source - Gooding & Company

Sold for $3,520,000 at 2009 The Scottsdale Auction : Gooding & Company.
In the late 1920s, the French developed a style known as goutte d'eau, literally a drop of water referring to nature's perfect aerodynamic shape. Figoni and Falaschi adopted this style, producing awe inspiring coachwork. The Talbot Lago shown exemplifies this and is one of a dozen vehicles built.In 1934, Major Anthony Lago rescued Talbot from the brink of insolvency. He rebuilt the company by building sports racing cars. By 1937, Talbot-Lago cars defeated Europe's best by finishing first, second, third and fourth at LeMans.This car was originally owned and street raced by Tommy Lee. It was later owned and raced by Brooks Stevens. Aside from mechanical maintenance, the car remains original and largely as it was built in 1937.
By Daniel Vaughan | Mar 2007

1937 Talbot-Lago T150C SS's that have appeared at auction but did not sell.