Sold for $2,970,000 at 2011 Gooding and Company - Pebble Beach Auctions.
The America series for Ferrari was to be chain of large touring models combining the largest V12 engine with luxurious coach bodies. They were to be the most luxurious and the most expensive of all Ferraris. They were to be the absolute elite of Ferrari's already elite line of automobiles. The America series from Ferrari was all about the absolute best, even the extravagant, being put together with some of the most beautiful body styles ever to be created. The basis for the America series came from the Superfast concepts. Each one of the models in the series were anything but lack-luster performers, but starting with the 400 series, the America line would become absolutely insane. The Ferrari 375 America utilized a new 4.5-liter Lampredi V12 based upon the same engine used in the Ferrari Formula One team. Construction of the car would run from 1951 on through 1955. Despite being in production for five years, Ferrari would only sell a relatively small number.
Sales of the 375 would be minimal perhaps due to the fact of the price, or, because customers were willing to wait and see what Ferrari would come up with next. Ferrari had created a line of custom cars that were also quite quick when it created its America line. However, in 1955, Ferrari would launch into the ridiculous by launching its new model called the 410. It would be the first of the incredible Superamericas.
Whereas the America series combined incredible luxury with incredible power and performance, the Superamerica series would introduce incredible luxury with unheard-of-power. The 410 Superamerica series cars would come with a 5.0-liter V12 engine that varied in power from 335 hp on up to over 360 hp. They would come with four-speed Synchromesh manual gearboxes, independent coil-spring front suspension, a live rear axle on semi-elliptical leaf springs and an interior to match the quality of the sound made by the engine.

On top of the incredible performance upgrade, the car would still come with custom bodywork offered by some of the most talented coach-building companies of the day. Scaglietti and Ghia were involved in making custom bodies for the car. But of course, Pinin Farina couldn't be left out of the list. What Ferrari and these coach-builders would combine to create was something very special. The 410 Superamerica wasn't just an evolution of the 375 America; it was a step up into the realm of the unequivocal. Toward the late 1950s, Ferrari would take the 410 and would shorten the wheelbase of the car by some 200mm. While the resulting car would receive a different moniker, for many, it would simply become known as the Series II. Chassis number 0715 SA was one of only eight Series II 410 Superamericas built during the production run from 1955 through 1959. This chassis would be up for auction at Gooding & Company's event in Pebble Beach in August of this year. Pinin Farina would create the beautiful bodywork for the shorter chassis. The design would be based upon the style created for the longer 410. However, the short wheelbase, for many, would provide a distinct advantage as it would give the whole of the car a meaner, sportier look. When first delivered in September of 1957, this particular car would sport an all-black finish with a natural leather interior. Other features included on the car were Marchal lamps, Englebert tires and chrome-plated Borrani wire wheels.
The car would do some time on the Ferrari stand at the 44th Annual Paris Motor Show. The car would have the honor of being in the very show in which the 410 Superamerica had been debuted for the first time two years prior.
The car's first owner would be the Arizonian Bernie Morgan. The car wouldn't remain with Morgan long before it would be sold to the infamous Haroldson Lafayette Hunt, Jr. Mr. Hunt was one of the wealthiest men in the world. The oil tycoon had ties to organized crime and numerous other 'questionable' affiliations. The car would change hands only a couple of times more before it would end up the property of a Ferrari enthusiast living in Olympia Fields, Illinois. The car would remain in the family for well more than twenty years. Throughout its life, the car has been well looked-after and has less than 19,000 miles recorded on the odometer. Original condition inside and out, the car still retains the same Englebert tires, matching chassis and engine numbers and original interior upholstery and instruments. Despite its obvious signs of aging and expected wear, the car has gone on to win numerous awards. Included in the long list of awards are the preservation awards at the Pebble Beach Concours d'Elegance, FCA National Meets and Concorso Italiano. The car has also received FCA Gold and Platinum Awards, Best Italian Sports/Touring Car at the Greenwich Concours d'Elegance and the prestigious Chairman's Award at Meadow Brook Hall. The car would even serve as a featured display at the Cavallino Classic. The car had started out as a show piece and after more than fifty years it still often takes center stage. Whether the first series 410 Superamerica or the shorter Series II, the 410 had really no competition and existed in a realm unto itself. It and the incredible sound from its Lampredi V12 would come to define a whole new level of exotic touring car. This particular car, with its history of being on center stage from Paris to concours events all over the United States, combined with its rare shorter wheelbase and howling Lampredi V12 made the car one to watch at the auction. Yet again it wouldn't disappoint. The car would end up garnering $2,970,000.Sources:
'Lot No. 135: 1957 Ferrari 410 Superamerica Series II Coupe', (http://www.goodingco.com/car/1957-ferrari-410-superamerica-pinin-farina-series-ii-coupe). Gooding & Company. http://www.goodingco.com/car/1957-ferrari-410-superamerica-pinin-farina-series-ii-coupe. Retrieved 24 August 2011. Wikipedia contributors, 'Ferrari America', Wikipedia, The Free Encyclopedia, 14 May 2011, 10:26 UTC, http://en.wikipedia.org/w/index.php?title=Ferrari_America&oldid=429059742 accessed 24 August 2011By Jeremy McMullen

Sold for $2,970,000 at 2011 Gooding and Company - Pebble Beach Auctions.
The 410 Super America was an exclusive, high-performance Ferrari. Only 37 cars were built in series I, II, and III between 1955 and 1959. This car started life as the 1957 Paris and Turin centerpiece show car, and it was purchased off the show floor in Paris. The body is designed by Pininfarina. While most Ferrari customers were receiving the 250 series cars, Ferrari's elite customers received the large-displacement 4.9-liter Lampredi-engined road warriors. This 410 Super America is entirely original, and has been owned by the present owner since 1969. This 410 Superamerica is entirely original with only 18,000 miles.The Ferrari America is one of a series of top-end Ferrari models built in the 1950's and 1960's. They were large touring cars with the largest V-12 engines and often had custom bodywork. All America models used a live axle in the rear, were front-engined, and had power steering.As if the custom, low-volume America was not fast enough, Ferrari produced another line of America cars, beginning with the 1955 410 Super America. The engine was now up to 5.0-liters with 340 horsepower (254 kW) available. A 1957 Super America III had triple Weber carburetors for even more power.
Each 410 Super America had custom bodywork, with a few Ghia but most by Ferrari stalwart Pininfarina. The price was extremely high - at $16,800, the 410 Super America offered at the New York Auto Show by importer Luigi Chinetti was more than twice as expensive as the Mercedes-Benz 300SL 'Gullwing' exhibited by Max Hoffman. Just a few (14 to 35) were built when the series ended in 1959.
Despite the 410's heavy weight and luxurious demeanor, it still performed impressively thanks to an enormously power engine. Road & Track reached zero-to-sixty in 6.6 seconds while Sports Car Illustrated claimed to reach sixty in 5.6 seconds, impressive figures in late fifties and respectable even today. 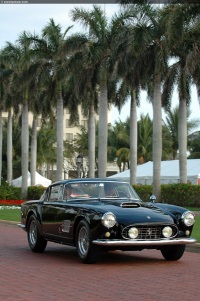 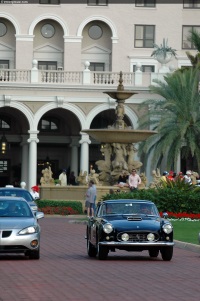 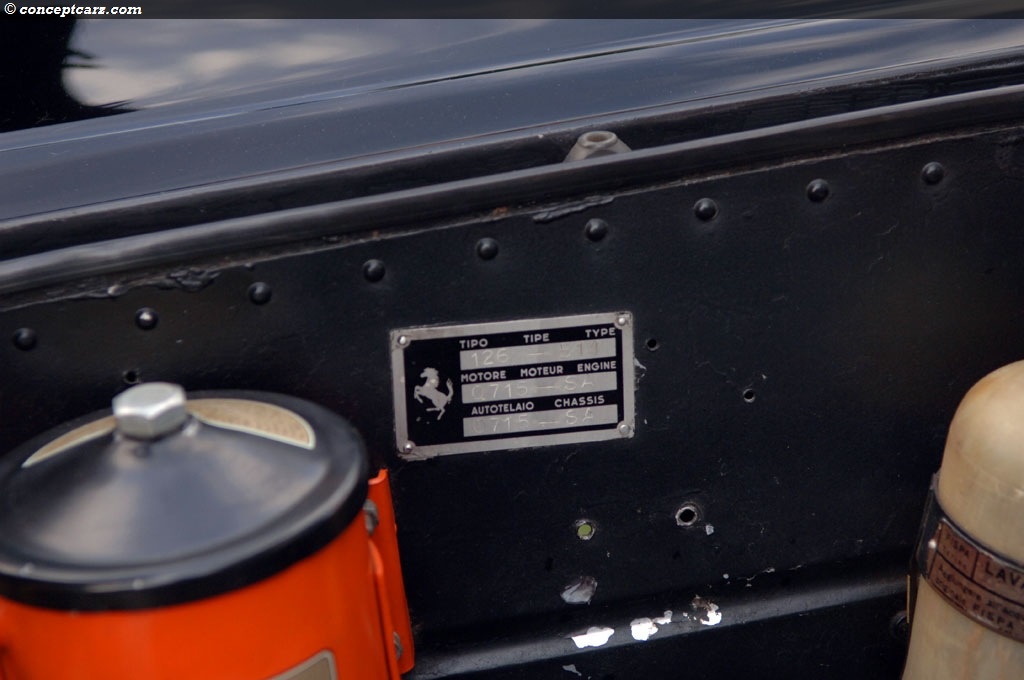 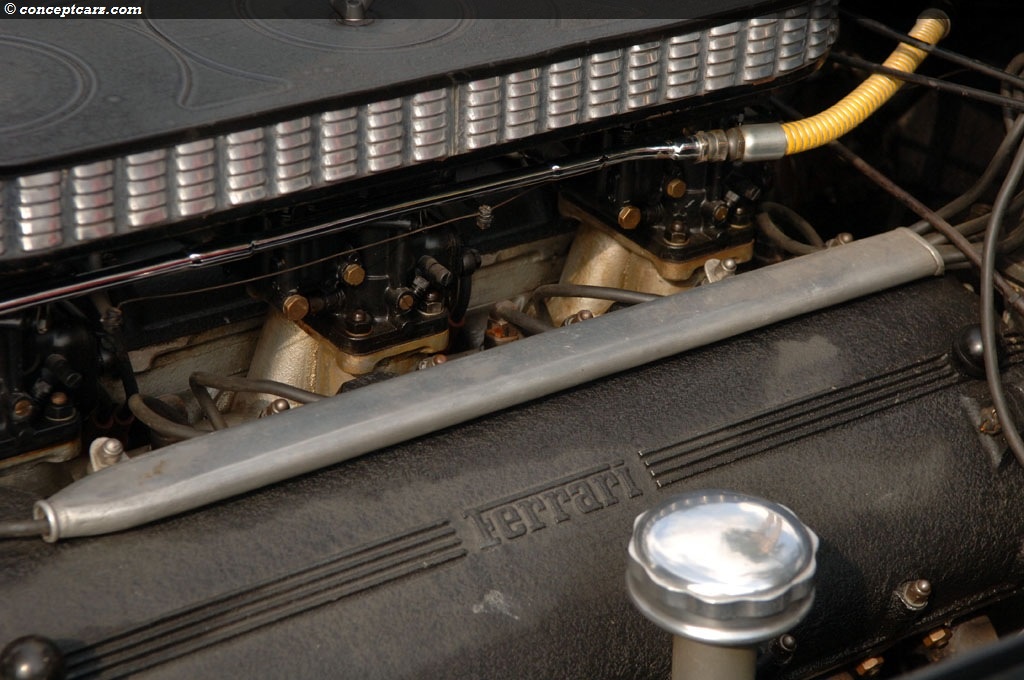 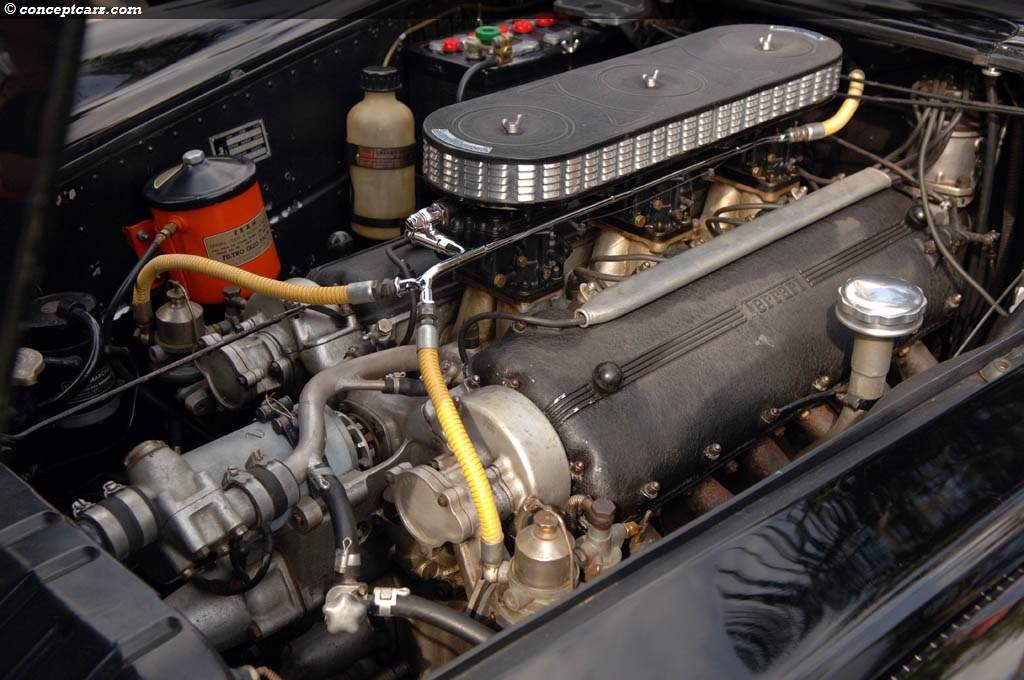 1957 Ferrari 410 Superamerica's that have appeared at auction but did not sell. 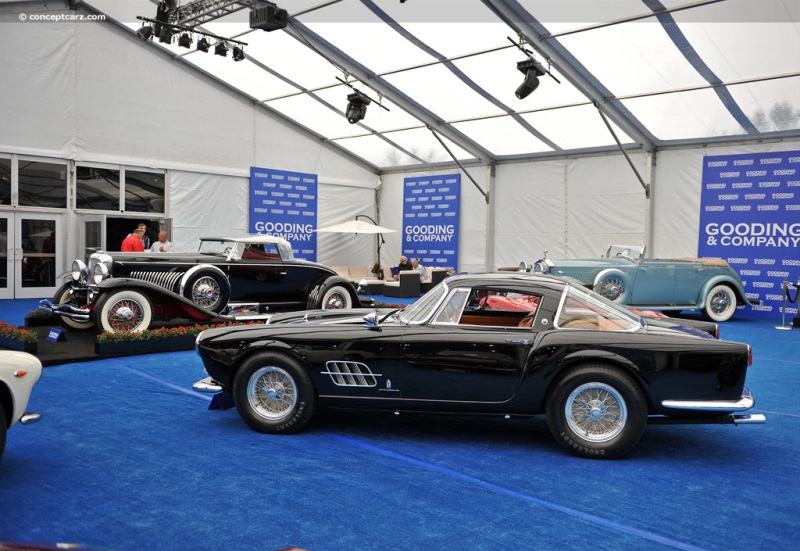 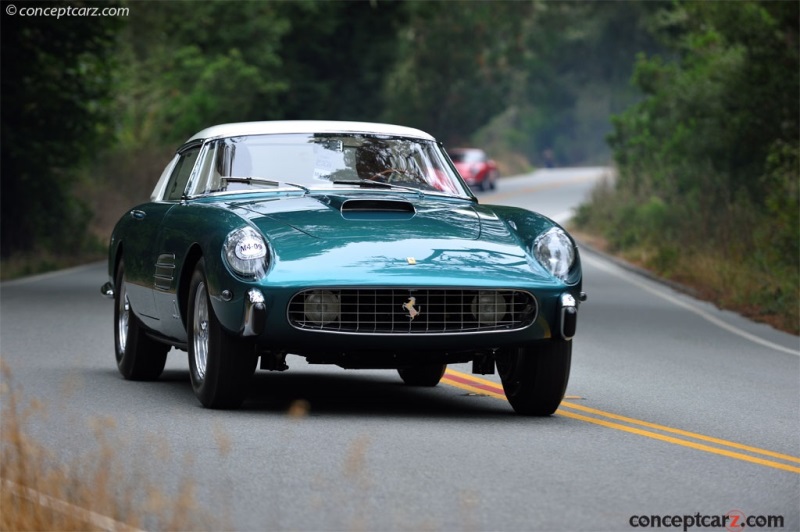 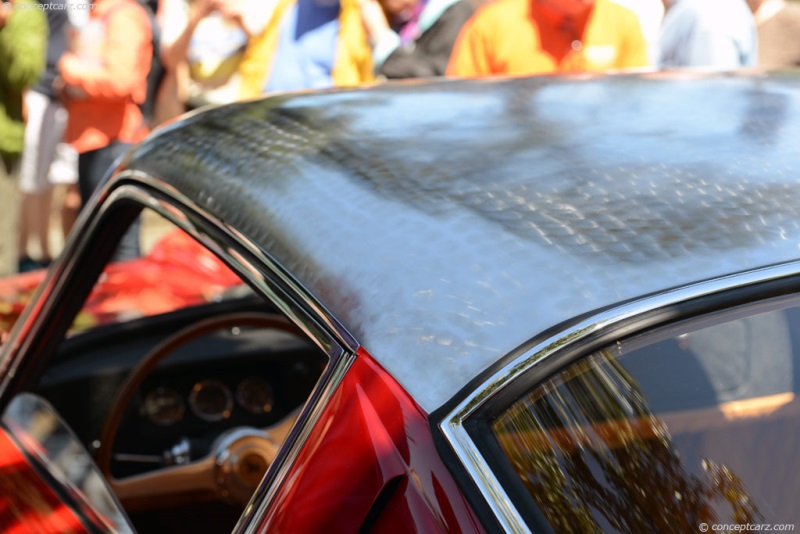 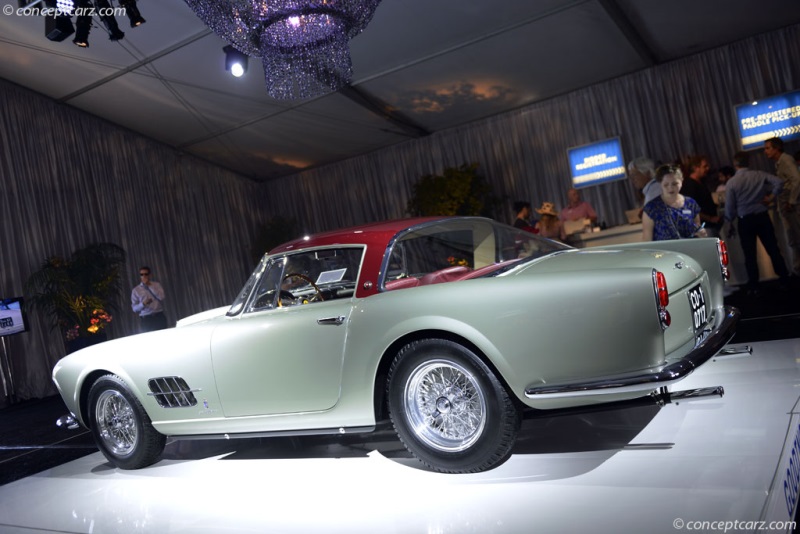