Sold for $90,200 at 2010 Gooding and Company - Scottsdale Auction.
The first Stoddard-Dayton was produced in 1904. A short time later, by 2007, they had produced 2,000 cars which quickly earned them a reputation for advanced engineering and build quality. Their innovative overhead valve engines ranged from 30 to 50 horsepower. Their durability and performance earned them a 2nd place finish at the inaugural 1909 Indianapolis Speedway races. From 1911 to 1914, three of the first Indy 500s used a Stoddard-Dayton pace car owned and driven by the track's creator Carl Fisher.Stoddard joined the United States Motor Company in 1911. This union brought the sleeve valve Knight-engined six to the Stoddard's lineup. The company would produce cars until the mid-1913s.
This 1910 Stoddard-Dayton Model 10-B Roadster has a one-off Tulip Roadster body created by E.E. Denniston. It features a cape-style leather top and maroon diamond-tufted wool upholstery. It is believed that the chassis and drivetrain were from the Barney Polland collection of early cars and restored by a father-and-son team of Stoddard-Dayton enthusiasts.
In 1994, the body was discovered at the Hershey swap meet and soon fitted to the chassis. Power is from a 212 cubic-inch Reserve Overhead Valve four-cylinder engine breathing through a single carburetor. There is a three-speed manual gearbox and two-wheel mechanical brakes. A modern electric starter and fuel pump have been added for ease of use while touring. In 2010, this Tulip Roadster was offered for sale at the Gooding & Company Auction held in Scottsdale, Arizona. The lot was estimated to sell for $125,000 - $175,000 and offered without reserve. As bidding came to a close, the lot was sold for the sum of $90,200, inclusive of buyer's reserve.
By Daniel Vaughan | Feb 2010

Recent Sales of the Stoddard-Dayton Model 10-B

Stoddard-Dayton Model 10-Bs That Failed To Sell At Auction

1910 Stoddard-Dayton Model 10-B's that have appeared at auction but did not sell. 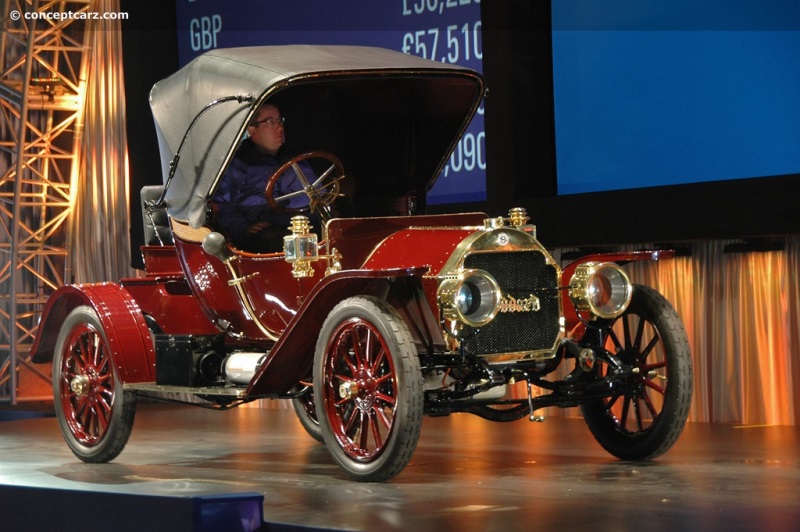