Sold for $671,000 at 2008 Gooding & Company.
Sold for $627,000 at 2010 Gooding and Company : The Amelia Island Auction.
Ferrari put their four-liter twin-cam 330 V-12 engine into a two-seat Spider for 1966, along with a coupe model that shared its clean, elegant and somewhat conservative appearance. It was a car meant for the businessman who was looking for an elegant car fitted with quiet performance. The 330 GTS shared styling with the Pininfarina-designed 275 GTS and featured a modified front end with a longer nose, similar to the 500 Superfast. They were well trimmed and appointed, with leather upholstery, wood paneled dashboards and electric windows. This example is chassis number 10189. It was finished at the Ferrari factory in May of 1967 and was the 35th of only 100 GTS models constructed. It was originally painted in Argento with a black leather interior. The car was delivered new to Milan's official Ferrari dealer Gastone Crepaldi S.A.S. where it soon found its first owner. A short time later, it was exported to the US and, by the 1970s, was in the care of Mr. Victor Williams in North Carolina. It would remain in the Bay Area for the next two decades.
During the late 1980s, the car was owned by a Japanese collector. In 1997, it appeared in Los Angeles, California. It was still largely original and wearing its factory delivered silver paint. The odometer showed 66,900 kilometers.
The current owner has given the car an interior refurbishment. In 2004, the car was stripped to bare metal and repainted - with the body repaired as needed. In 2010, this 330 GTS was offered for sale at Gooding & Company's auction held in Amelia Island, Florida. The car was expected to sell for $650,000 - $800,000. As bidding came to a close, the car had been sold for the sum of $627,000, inclusive of buyer's premium.
By Daniel Vaughan | Apr 2010 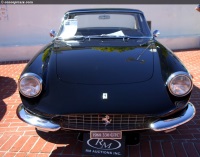