Chassis no. 2735 was one of only three right-hand drive Competition short-wheelbase cars. It was also the second Rob Walker/Stirling Moss GT Berlinetta, the other being chassis no. 2119.

It was also the only 250 GT Berlinetta to be raced in period by no fewer than three great drivers of the day – as well as Stirling Moss, it was also raced by Graham Hill and Innes Ireland.

The car was delivered to Le Mans on the 6th of June 1961, in Rob Walker colours, but to race for Luigi Chinetti's NART team. The car weighed in at 1107 Kilogrammes. 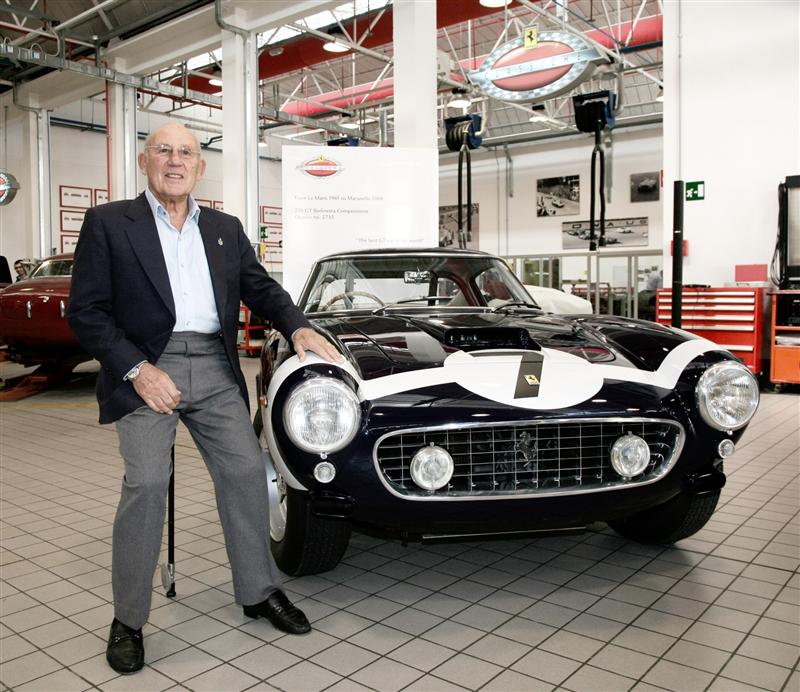 Stirling Moss and Graham Hill. GT Lap record. DNF. Running 3rd overall in the 9th hour, well ahead of the other works prototypes until a fan blade broke loose and sheared the water pump. 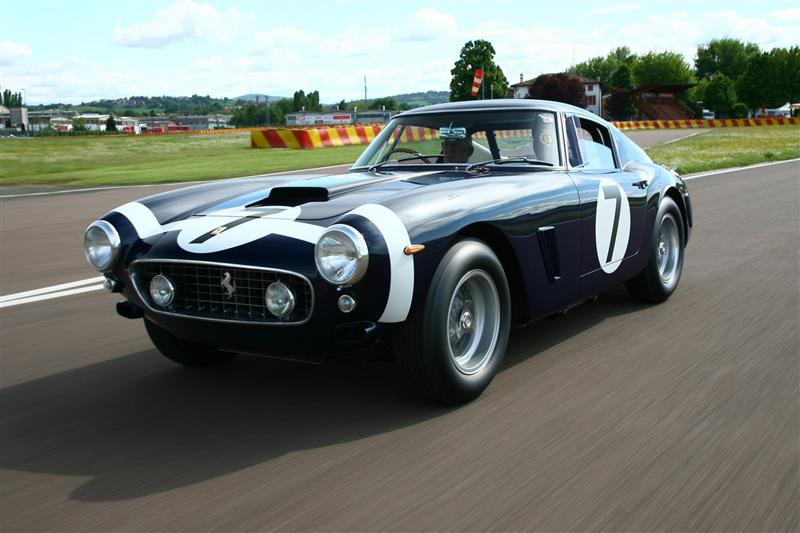 Stirling Moss 1st OA, Pole Position and GT Lap record. Moss again sees off Mike Parkes in the other SWB as well as Graham Hill, Salvadori and McLaren in the E-Types.

Stirling Moss 1st OA. Moss wins his 7th and last TT, defeating Parkes in a SWB and Jim Clark and Salvadori in Aston Martin DB4 Zagatos. Giotto Bizzarrini, who oversaw the Ferraris at the race, then drove #2735 over the Alps and back to Maranello.

Stirling Moss 1st OA. This is the last race Moss will win before his accident. 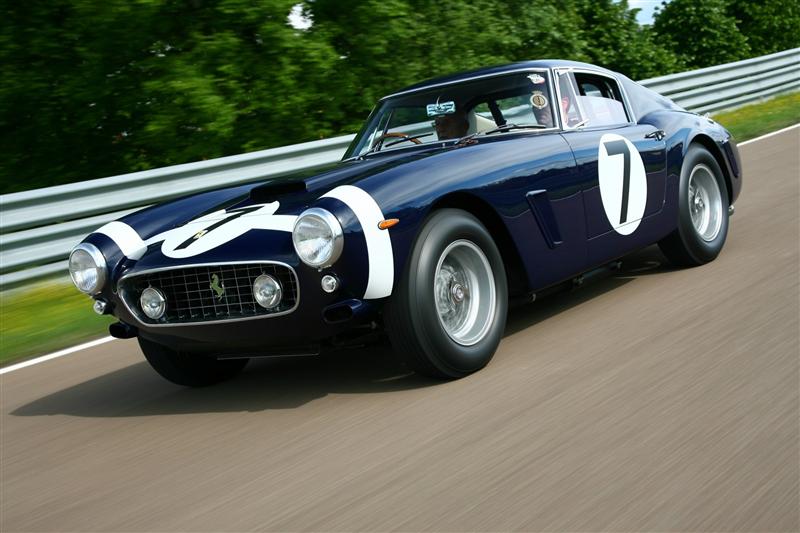 Chassis no. 2735 was the Ferrari most raced by Moss (five races out of 12 Ferrari drives) and also the car he won most races in. He describes it as the ‘best GT car in the world'.

The car was then bought by Chris Kerrison, painted silver and raced with some distinction, before crashing into John Surtees' GTO and Jim Clark's Aston Martin DB4 Zagato at the 1962 Goodwood Tourist Trophy. After this it was sent to Ferrari for repairs, but Kerrison then entrusted the car to Bizzarrini who had Drogo build a pseudo GTO on the chassis. The car was variously raced at Spa, the Nürburgring, the Tour de France and many British circuits. It was later owned and raced by the Hon. Patrick Lindsay, Dick Crosthwaite and Vic Norman amongst others. In 1983 the Drogo body, which had been crashed and was deteriorating, was removed by a ÚK specialist and replaced with new bodywork to the original Scaglietti GT Berlinetta short-wheelbase design.

In late 2007 the current owner, Clive Beecham, entrusted Ferrari Classic with a complete body-off restoration. The car, which has a continuous, uninterrupted history, had - naturally enough for a racing car - been subject to numerous repairs over the years. When stripped by Ferrari Classiche, a number of incorrect repairs to the chassis came to light, and these were rectified according to the factory's original chassis blueprints.

The engine was totally overhauled, with a correct-specification engine block being cast by the factory to replace the non-original block that had been fitted in 1967. At the same, the original specification Weber 46s were fitted, the transmission and differential were overhauled, and all worn or non-original components repaired or replaced with original parts. Where original parts were no longer available - such as pistons and connecting rods, cam shafts, gear selector forks, aluminium riveted fuel tank and exhaust system - these were remanufactured by Ferrari Classiche using the designs from the company's extensive archives.

In respect of the car's provenance, Ferrari Classiche carried out a fine-tuning operation on the bodywork. All the existing body panels were retained, but a number of structural areas were rectified where modifications had been made in period when the car was rebodied by Drogo and the scuttle line lowered. 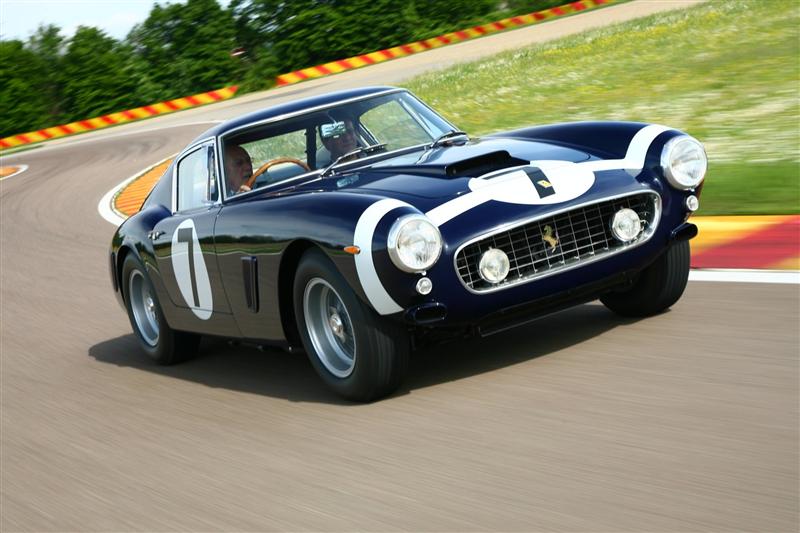 The result is a 250 GT Berlinetta that completely respects the criteria of correct technical specifications and authenticity as laid down by Ferrari, with every single component corresponding to the exact description of the car according to the build sheet when it left the factory in June 1961.

This department was set up in 2006 to provide owners of classic, veteran and historic Ferraris with dedicated maintenance, repair and renovation services, technical assistance and authenticity certification. Thus far a total of 1,000 certification requests have been processed. The certification process involves researching the original designs of the historic Prancing Horse cars held in the Company's own Archive which houses details of all of the GT, competition and sports prototype cars built by Ferrari since its foundation. Any work done on the cars is carried out in compliance with those original designs. In all, 28 full restorations have been carried out at Ferrari Classiche's dedicated workshop.

2009 will be a very important year for Ferrari collectors as we will be celebrating the 50th anniversary of the launch of the 250 GT Berlinetta SWB. In fact, this legendary car will get a category all of its own in the Concours d'Elegance taking place in Florence between May 1st and 3rd. A fantastic 250 Testa Rossa will also be the star of the 'Leggenda e Passione' auction being staged by RM Auctions in collaboration with Sotheby's, at the Fiorano Circuit on May 17th.Source - Ferrari
No auction information available for this vehicle at this time.

1961 Ferrari 250 GT SWB Competition's that have appeared at auction but did not sell.