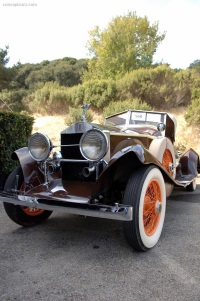 1930 Rolls-Royce 20/25hp
Average Auction Sale: $38,778
Median Auction Sale: $42,560
Chassis Profiles
Total Production: 3,827 1929 - 1936
Rolls-Royce introduced the replacement for the Twenty in 1929, dubbed the 20/25 HP, and utilized the chassis of its predecessor. The engine was enlarged from 3.1 liters to 3.7 liters, giving a significant increase in performance. Improved power had become a necessity because owners often insisted on fitting elaborate and heavy coachwork, which severely affected the performance. This was an important change considering owners did not like to be overtaken by what they believed to be inferior cars.
An 'Autocar' report in 1931 describes the 20/25 thus: 'Every single feature spells durability, the machine is on a plane altogether superior to the normal style of motor car'. This claim is backed up by the fact that this model was the choice of some of the most famous sporting drivers of the day. Tommy Sopwith owned one, as did the famous racing driver Prince Bira of Siam and racing driver and record-breaker Sir Malcolm Campbell.
- Rolls-Rocye Motor Cars

With nearly 4000 chassis created it is one of Rolls-Royce's best selling contemporary models, lasting from 1929 through 1936. During the production lifespan of the 20/25, the vehicle received many updates. The ignition, brakes, clutch, and carburetors were just a few of the mechanical areas to received modifications and improvements. In 1932 shock absorbers and thermostat-controlled devices were introduced. The thermostats operated the radiator air-flow automatically eliminating the need to operate the radiator shutters by hand.Source - Rolls-Royce Motor Cars