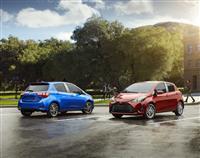 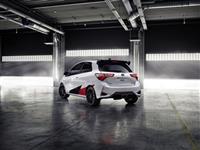 2001 Toyota Yaris
Seeking car enthusiasts that wanted more style and innovation, the Yaris was popular with buyers who also wanted an economical and practical small car. Introduced in 1999 the Toyota Yaris was a huge sensation. Well built, economical and fun to drive, the Yaris was considered to be a great value for the price. A new compact car from Toyota, the Yaris is available in two-door hatchback form and 4-door sedans. According to the manufacturer, the Yaris offers very good fuel mileage, up to forty miles per gallon.

The baby of the Toyota range, the Toyota Yaris has been tagged as the ‘Clever Car'. Economical with its 1.3 liter engine, the Yaris utilizes the same engine as the Scion xA and xB. Toyota was aiming for the older customer base rather than the youth-oriented xA model. While the youth was focused on the Scion with their disposable income on dealer customization options, thrifty consumers concerned about gas price's of today will buy the economical Yaris.

Designed by Sotiris Kovos, the Toyota Vitz, Toyota Yaris liftback and the Toyota Echo hatchbacks are all models of a small subcompact vehicle originally launched by Toyota in 1999. The Vitz is a 3 and 5 door hatchback automobile that is sold in Europe, Australia, New Zealand, South Africa as the Yaris. In Canada, the US, Hong Kong, New Zealand, Australia and Canada the vehicle is known as the Echo hatchback up until 2005.

Assembled in Toyota City, Japan, the Toyota Yaris debuted in Europe in early 1999. Following the launch of the European Yaris hatchback a slightly updated version was introduced in Canada for the 2005 model year as the Echo hatchback. The Toyota Echo that was released in the U.S. was the sedan model only. In 2000 the Toyota Yaris was voted as European Car of the Year, beating the impressive Fiat Multipla.

Originally available with gasoline-powered 4-cylinder 1.0 L or 1.3 L engines with Toyota's VVT-I technology, the European Yaris came with the ‘warm hatch' 1.5 L T Sport that followed in 2001. In 2003 the Yaris underwent a facelift that featured the 1.4 L D4-D diesel engine that offered 75 hp. This same diesel engine was licensed to BMW for use in their MINI One D model. Still maintaining low fuel consumption and emissions, the engine management systems gave the equivalent of 1.4 liter performance from a 1.0 liter engine.

The European Yaris T-Sport; the Japanese Vitz RS 3-door hatchback debuted in 2001 powered b y a 1.5 L engine. With a sportier suspension along with extra power compared to the 1.3 L model, the 1.5 L T Sport was considered to be ‘more fun to drive' than the base models. Fitted with a turbo-charger, the Vitz RS was eventually modified by TRD, Toyota Racing Developments. With a power output of almost 120 kW, a limited run was produced and 1-60 was achieved in only seven seconds.

Looking almost identical to the European Yaris, the Echo was very popular in Canada, a place where smaller vehicles are much more popular that in the U.S. The 3 and 5-door hatchback models were introduced in 2004 to the Canadian Toyota lineup due to the extremely high sales. Larger bumpers were added to meet Canadian safety requirements.

Introduced late in the year 1999, the Echo was introduced in Australia and was also very popular. The Echo was produced to replace the Starlet, and was sold as either a 3 or 5 door hatchback and was available with only the 1.31 VVT-I engine. Available for a limited time in Australia was an Echo Sportivo variant that was fitted with the 1.51 VVT-I engine. The European Yaris T-Sport and the Sportivo were very similar.

In 2000 the Yaris Verso debuted. An exciting and interesting addition to the range, the Verso utilized the same running gear as the hatchback, but featured a more practical interior. The model was sold as the ‘Fun Cargo' in Japan. In 2004 the Verso was replaced by the Ractis.

Early on in 2005, the Vitz was redesigned by Toyota and went on sale immediately in Japan. By the end of 2005 the second generation Vitz was released to the European, Canadian, Mexican, Australian and Puerto Rican markets. The vehicle was sold as the ‘Yaris' for the first time in both the North American and Australian markets. On January of 2006 at the Los Angeles Auto Show, the USA 2007 Toyota Yaris was introduced for the first time. To this day the Yaris continues to be a popular sell in Europe, especially Britain. The Yaris is produced in Japan, Thailand and France.

The 3-cylinder engine was replaced with the 4-cylinder 1.0 VVT-i engine that is also found in the Toyota Aygo and Daihatsu Sirion. Offering a bit more power, the 1.4 D-4D received a 15 PS boost to 90 PS. Nine airbags were offered for the first time in a car of its class.

Utilizing the Toyota NZ engine, the Canadian Yaris hatchback is featured in both 3 and 5-door models and features a 1.5 L 4-cylinder VVT-i engine that is rated at 106 hp an 103 ft·lbf of torque. Rated at 40 miles per gallon; highway and 34 mpg; city, the '06 Yaris with the 1.5 liter engine is quite impressive. 14 inch wheels came on the 3-door CE and 5-door LE versions and the RS models are equipped with 15-inch alloys with standard anti-lock braking system and Electronic Brake force Distribution.

Sharing much with the Canadian model, the US Yaris comes standard with the 1.5 liter VVT-i engine and five speed manual transmission while the four speed automatic ECT is optional. The 3-door Vitz shares the Yaris name with the Toyota Belta sedan. The ‘Yaris Liftback' name is used on the 3-door model while the 5-door model is not sold in the U.S. The Scion xD is too similar to the 5-door and thus makes it ridiculous to compete. Optional ABS and optional side and head airbags are available on the US model. All-weather guard packages are offered in the US models rather that the CE, LE and RS packages for the Canadian hatchback

Debuting at the Geneva Motor Show, the Toyota Yaris T-Sport was unveiled in 2007 and was powered by the new 130 bhp 1.8 2ZR-FE DOHC L dual VVT-i I4 petrol engine, which reached 100 km/h in less than 10 seconds. 17 inch alloy wheels, a newly redesigned bumper at the rear, a tail spoiler, deep side skirts and a mesh grille at the front were featured on the T-Sport.By Jessica Donaldson