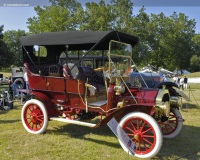 1906 Buick Model F
Produced: 1,207
Original Price: $1,250
Average Auction Sale: $29,700
Median Auction Sale: $29,700
Chassis Profiles
Total Production: 1,200 1906 - 1910
David Buick was a Scottish-born bathtub manufacturer and the founder of the Buick marque. He was joined by a Michigan bicycle merchant named Walter Lorenzo Marr and a French machinist named Eugene Richard. These individuals devised an engine with valves in the cylinder head, opposite the pistons rather than the more popular way of alongside them. The term 'Valve-in-Head' was appropriate and would become a hallmark of Buick cars even in the modern era.

William Durant was impressed by the products created by David Buick, Walter Marr, and Eugene Richard and invested in each of these companies. He became a member of Buick's board of directors in 1904 and soon extended a $300,000 stock issue for the Buick Motor Company. He was an avid stock speculator, an investor, and a superb salesman. He sold more than 1,100 Buicks before the company had a chance to create 40 examples.

The Model B was the first car produced by Buick and introduced in 1904. It was a four-passenger tourer that sold for $950. The Model B was followed by the Model C in 1905 and the Model F followed a year later. Production of the Buick Model F lasted until 1910 with a total of over 1,200 examples were produced.

The cars were elegant, durable, and fitted with rather powerful engines for the era. In 1906 a Buick Model F proved its capabilities by entering a 1,000-mile relay run from Chicago to New York. The event was staged by the Chicago American and Examiner. At the completion of the event, only the Model F Buick had traveled the complete distance and earned the nickname 'Old Faithful.'
By Daniel Vaughan | Dec 2007