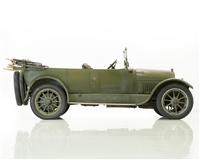 1918 Cadillac Type 57
Original Price: $2,595 - $4,690
Average Auction Sale: $44,633
Median Auction Sale: $35,200
Chassis Profiles
Total Production: 45,000 1917 - 1919
The Cadillac marque quickly earned a reputation for innovative and refined automobiles. Their electric starter and lighting introduced in 1912 revolutionized the industry and made gasoline-powered cars the popular choice over the alternative battery or steam-powered cars. In 1915, they introduced another equally impressive innovation, the first mass-produced V8 engine. It was designed by Scottish-born engineer, D. McCall White, and given an L-head design with two cast-iron blocks with integral heads, mounted on an aluminum-copper alloy crankcase. Fork-and-blade connecting rods were used as the banks of cylinders were positioned directly opposite each other.

The Cadillac Type 57 was introduced for the 1918 model year. They were offered in ten body styles and could be mounted on two wheelbase sizes. Production of the Type 57 ran from August of 1917 through December 1919 with total production exceeding 45,000 cars.
By Daniel Vaughan | Apr 2008