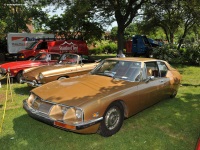 The quad-cam V-6 engine, located in the front of the vehicle, was based on Maserati's V8. The V8 would have been used but it was too powerful for the front-wheel drive vehicle and would have extended the hood of the car too far. The V6 ended up being an unreliable engine that needed constant re-tuning. Fuel consumption was poor, but on the bright side, it could go from zero-to-sixty in 8.5 seconds and reach a top speed of around 142 miles-per-hour.

The SM featured a self-leveling hydro-pneumatic suspension that gave the car a soft, smooth ride. There was a lot of body roll during cornering and under high velocity. The height of the vehicle could be set from inside the vehicle.

The cramped interior had a single-spoke steering wheel and oval instruments that was intended to be futuristic in appearance. The outside of this super-car was sleek and smooth. The SM was very innovative and used technology that was rather creative. The front of the car had six lights, three on each side of the vehicle. The middle lights would move with the steering wheel, illuminating the path of the vehicle. The disc brakes were very sensitive and responsive due to the power-brake hydraulic system. This took some time getting used to, and usually resulted in screeching-stops.

In 1974 Citroen was sold to Peugeot and the SM was dropped from the line-up. Peugeot then sold Maserati in May of 1975.
By Daniel Vaughan | Jun 2012Since its founding in 1919, Citroen has consistently produced some of the most innovative cars in the world. From the diminutive Deux Chevaux to the smooth and regal DS, the French carmaker's history is filled with avant-garde designs and adventurous engineering forays. Some of Citroen's innovations caught on, such as the manufacturer's early adoption of front-wheel-drive and aerodynamic body styling. Other hallmark features of the carmaker's products, though, remained idiosyncratic novelties. Apparently, nobody else understood the benefit of a central hydropneumatic system that controlled the power steering, power brakes, and height-adjustable suspension all at the same time…

But while many of Citroen's signature engineering touches were too complicated and risky for other carmakers to adopt, they endowed Citroen's products with a mechanical finesse and individuality rarely seen on high-volume automobiles. Citroen developed elegant solutions to problems that most manufacturers simply ignored. Knowing that people drove their cars on all sorts of roads, Citroen created an ultra-smooth suspension that was height-adjustable so drivers could cope with various road surface qualities. The real-world advantages of front-wheel-drive and aerodynamic bodies were being discovered by more and more carmakers and buyers.

In the decades following World War II, Citroen's 2CV and DS proved that innovation could sell. Both of those models realized huge production figures, and both were produced for many years. But when 1970 rolled around, the French brand decided to try something riskier: a sporty Citroen.

The DS and 2CV were both excellent cars exhibiting great attention to detail. Their roles, though, were staid. The DS was a family car. The 2CV was an economy car. So when Citroen decided to challenge the automotive establishment with a sporty car of its own, they had little experience in producing vehicles whose real ambitions were to become heroes of the racetrack or playthings of the rich and famous. The sporty Citroen, the SM, accordingly sold slowly and puzzled potential customers. Why should any car with sporting intentions need a height-adjustable suspension? Why such an unconventional shape? And why front-wheel-drive?

Had the SM been a true sports car, these features may have been a death sentence. In reality, though, the SM was a grand tourer—and Citroen knew that its idiosyncratic design traits had just as much business belonging to a GT car as to a family sedan. The advanced suspension ensured a good ride quality on all road surfaces. The aerodynamics lowered noise levels at high speed and provided better fuel economy, both important characteristics in a vehicle intended to swallow distance in suave comfort. And the front-wheel-drive endowed the SM with great usability, with surefooted road manners and impressive foul weather capabilities.

Driving enthusiasts often derided front-engined, front-wheel-drive cars for their unwieldy forward weight bias, a feature that tends to result in heavy understeer and sloppy handling. The SM, though, was technically a mid-engined car: its engine fit entirely behind the front axle line. Coupled with an advanced steering system, this front-mid-engined layout enabled the SM to avoid some of the inherently placid handling characteristics of a front-wheel-driver. The Citroen's handling may have even been too lively for some drivers, with its quick steering a copious body roll likely surprising more than a few first-time pilots.

The front-mid placement of the SM's engine accounted for much of the car's character, but the engine itself accounted for far more. The all-aluminum V6 was an advanced motor. With very oversquare bore/stroke dimensions, revs came easily. Dual overhead cams per cylinder bank and three Weber carburetors served as visual indicators of the engine's exotic nature. But, for the uninformed, the real surprise came from the name scrawled on the valve covers: Maserati.

Prior to the SM, Citroen had created marvelous cars with advanced engineering and lovely styling—but the company's engines remained conventional and boring. The SM, then, represented the first (and arguably only) Citroen to have it all: complicated and exquisite engineering, aerodynamic and enticing styling, and finally an engine that deserved to tote the whole package around.

The Maserati motor beneath the SM's hood was no coincidence. Citroen purchased Maserati from the Orsi family in 1968, in a bizarre merger that resulted in some predictably bizarre vehicles. Two of those Franco-Italian oddballs, the Citroen SM and Maserati Merak, were wholly developed under Citroen's ownership of Maserati and intended from the start to share a new, Maserati-developed V6. Surprisingly, this engine ended up in the SM two years before the Merak, as that Maserati did not reach production until 1972.

Citroen knew that its staid engines didn't do justice to its cars' advanced designs. This was less of a problem in a sedan like the DS, but an opulent GT machine like the SM would have made no sense without a suitably charismatic engine. The Maserati V6 helped turn the SM into a world-class grand touring car that supplemented a signature Citroen package with some bought-in Italian charm.

And yet, for all its strengths and innovations, it somehow comes as no surprise that the SM sold poorly. The SM was a great car, but it just wasn't what people wanted. The styling was exciting but not sexy. The performance was competent but not exhilarating. But perhaps the car's biggest shortcoming was no problem of its own. The people who buy, and bought, lavish GT cars want to be seen when they arrive. Competing cars from more prestigious brands like BMW and Mercedes-Benz surely hurt SM sales, particularly in the brand- and image-conscious American market. When a BMW pulled up in front of a restaurant, passers-by saw a successful person. But when a Citroen SM pulled up behind, people only saw a funky car—one that, for many onlookers, probably looked more like a submarine or a humpback whale than a traditional grand tourer.

Even if a large market had existed for a car like the SM, though, the grand touring Citroen still had some unflattering traits. Its hyrdropneumatic suspension/steering/braking would have been known well to Citroen shops the world over, but the short supply of Citroen mechanics in America ensured that an SM would never be as reliable or affordable to service as its more common competitors. Additionally, many buyers may have scoffed at the Citroen's front-wheel-drive, and still more likely preferred the flatter cornering of more stiffly-suspended competition.

Over a half-decade of production, Citroen produced just under 13,000 examples of the SM. Following the oil crisis of 1973, the carmaker ran into great financial difficulties and in 1974 Peugeot absorbed Citroen. The following year, the new Peugeot-Citroen group sold off Maserati to Alejandro DeTomaso. A strange era had ended, taking with it one of the most exciting and belligerently individualistic Citroens ever created.