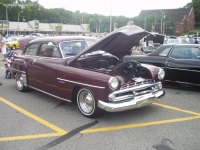 1949 Dodge Wayfarer
Produced: 63,816
Original Price: $1,740
Average Auction Sale: $17,483
Median Auction Sale: $16,638
Chassis Profiles
The Dodge Wayfarer was introduced for 1949 and was the company's entry-level vehicle. It was offered as a two-door, six-passenger sedan, a two-door, three-passenger coupe and as a two-door, three-pasenger roadster. The roadster bodystyle was initially offered with removable windows, which were superseded by roll-up windows with vents in 1951. The 1949 and 1950 Wayfarer are of the last production roadsters built in America, except with the exceptions of the Corvette and the Kaiser-Darrin.

Like many automakers, the Dodge vehicles were not ready with its first all-new postwar cars in time for the fall 1948 new car roll-outs. So the 1948 Dodges were sold through April as the 'first Series' 1949s. The second series of 1949 models were completely new, with the exception of the L-head six-cylinder engine found under the bonnet.

Sales were strong for Dodge during the 1949 season, with nearly 257,000 examples produced. This earned them eighth place in industry volume.

The Dodge Wayfarer series rode on a 115-inch platform with total production reaching 63816 units for 1949. The most popular bodystyle was the 2-door sedan which saw the bulk of the Wayfarer production, with 49,054 units produced. Just 5,420 were the roadster, priced at $1,725 - nearly identical to the price of the 2-door sedan.

The designs for 1949 were rather square, with lower and longer bodies than the 1948 models. The fenders in the front flared into the body while the rear fenders continued to be bolted on, and were capped by three-sided taillights.

Powering the Wayfarer was a 230.2 cubic-inch six-cylinder, five-main bearing engine that had a 7.0;1 compression ratio and a Stromberg two-barrel carburetor. Horsepower was rated at just over 100 with torque reaching 190 lb-ft at 1,200 RPM. Top speed was in the neighborhood of 75 mph. This base engine would have the same amount of power until the 1954 model year.

The engine was mated to a semi-automatic Fluid Drive transmission that had two gear positions: low, and high. The 'low' speed governed the first and second gears while the 'high' position took care of third and fourth.

The 1950 Wayfarer received minor restyling to the trim and a new grille. The grill had three horizontal bars, with the top bar curving down at each of the ends. Sales continued to be strong, with sales exceeding 75,000 units.

The 1951 and 1952 Wayfarer models were virtually identical. The 1951 season saw the Wayfarer receive several styling updates which would remain through the 1952 season. They had a new hood, grille and bumper modifications. The bumpers had a rounded cross-section, the hood sloped smoothly to the grille, and a single chrome stripe was placed on both the front and rear fenders. The Wayfarer name could be found on the front fenders, and the Dodge crest was located in the center of the hood.

The biggest news for the Wayfarer series for the 1952 model year was the absence of the Roadster body style. Though exceptionally elegant and visually pleasing, it was never a strong seller. 5,420 were sold in 1949, followed by 2,903 the following year. For 1951, Dodge sold just 1,002 examples, prompting them to drop it for 1952.

1952 would also be the final year for the Wayfarer. For 1953, the Meadowbrook Series would serve as the company's entry-level vehicle.
By Daniel Vaughan | Dec 2011