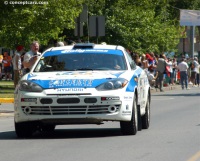 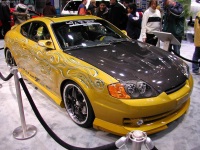 The name Tiburon in Spanish means 'shark'. The Hyundai Tiburon was introduced in 1996 and has remained in production since that time. In some markets throughout the world, it was dubbed the Hyundai Coupe. The first generation of the Tiburon, produced from 1996 through 1999, was offered with a 1.6- or 1.8-liter engine. In the United States, the base engine was the 1.8-liter unit which offered 130 horsepower; it shared this engine with the Elantra. An FX trim level was available on the Tiburon and included a 2.0-liter engine that was rated at 140 horsepower.

In 2000 the Tiburon received a mild facelift. In 2003, a major facelift occurred, and a V6 engine was now available under the bonnet of the Tiburon. The 2.0-liter unit with 138-horsepower was offered as standard. The V6 engine offered 172 horsepower. There are three engine options to select from, including a 4-speed automatic, and a 5- or 6-speed manual. The car rests on a 99.6-inch wheelbase and measured 173-inches in length.
By Daniel Vaughan | Jul 2007
Hyundai Models
Accent
Azera / Grandeur
Elantra
Entourage
Equus
Genesis
Ioniq
Palisade
Santa Fe
Sonata
Tiburon
Tucson
Veloster
Venue
Veracruz