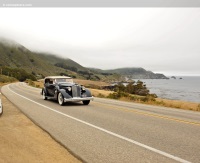 The technological improvements continued for 1917 with Packard introducing a redesigned Twin Six with separate cylinder block and head castings. The aluminum pistons now had two compression rings and an oil scraper. Also, the intake and exhaust manifolds were redesigned. Even with these improvements, the horsepower rated remained at 88, although the rated RPM figure dropped from 3000 to 2600.
By Daniel Vaughan | Nov 2008