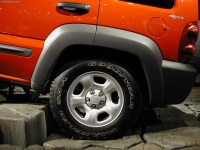 2001 Jeep Liberty
In 2002 the first generation of the Jeep Liberty was unveiled to the public as a compact sports utility vehicle produced by the Jeep marque of Chrysler. The Liberty was a four-door car that was available in two different models, the Sport and the Limited. The sport was powered with a 150 horsepower engine with four cylinders, while the Limited featured a 210 horsepower 3.7-liter V6 engine. The Liberty was nicely appointed with 16-inch tires, heated front seats and a split rear seats could be folded down for more space. The Liberty was priced between the Wrangler and the Grand Cherokee.

The Liberty was the smallest of the 4-door Jeep SUVs until the car based 4-door Compass and Patriot arrived in 2007. The Liberty featured a uni-body-on-ladder-frame construction that added stiffness to its ride and handling, and enhanced its off-road capabilities. The Liberty was constructed at the Toledo North Assembly Plant in the U.S., and also in Egypt and Venezuela.

The Liberty wasn't the first Jeep to use an independent front suspension, it was actually the Jeep Wagoneer to first use it in the 1960s. The Wagoner was never actually put into production, due to how fast the bushings would wear out. During its first calendar year of production, Jeep exceeded their expectations by selling 10,000 Liberty CRD models. For 2002, the Jeep Liberty was nominated for the North American Truck of the year award.

The Liberty was intended as a replacement for the discontinued Jeep Cherokee and it was inspired by styling from the Dakar and Jeepster concept cars. At first three trim levels were offered, the top end Limited, a more rugged looking Renegade, and the base Sport and were available with either 2WD or 4WD.

A Renegade model of the Liberty was introduced in 2003. While the Limited model received 17-inch tires the Renegade featured a V6 engine with 210 horsepower. A system that monitored tire pressure was installed in 2004, along with a hands free cell phone. The Sport model received a CD player this year. A diesel-turbocharged engine was added to the lineup in 2005. All of the models received a fresh new look this year, and added to the list of options were satellite radio and navigation systems. The Renegade trim level was replaced with the Latitude in 2007.

The Liberty was the first Jeep to utilize two new PowerTech engines, the 150 hp 2.4 L I4 which was dropped in 2006 and the 210 hp 3.7 L V6. For the 2005-2006 Sport and Limited models, the VM Motori 2.8 L I4 common rail turbodiesel became available in CRD branded models. Generating 160 horsepower, the diesel used a variable geometry turbocharger and 295 pound-feet of torque. The diesel powerplant's overbuilt nature added nearly 200 lbs to the CRD's curb weight versus the gasoline model. The CRD was introduced by DaimlerChrysler to gauge the marketability of diesel engines in North America. The first Jeep to use rack and pinion steering was the Liberty. Due to stricter 2007 U.S. diesel emission standards, the 2.8L VM Motori CRD which had only been available in 2005 and 2006 for the Sport and Limited models was discontinued.

The Jeep Liberty was available with either a part time Command-Trac or full time Selec-Trac transfer case. The transfer case had four position; 2-HI, 4-HI, Neutral and 4-LO. For regular driving the lever is placed in 2WD HI, which allowed for the two rear tires to receive power. When driving on slippery or loose pavement one used the second position, 4WD HI. This position locked both the front and rear drive shafts together splitting engine power equally between all four tires. Neutral, the third position, disengages both drive shafts from the transfer case which allowed the car to roll freely, and this was also used for towing behind another vehicle. The final position, 4WD LO is also used when there is little traction. This final position much like 4WD HI locks both the front and rear drive shafts together, and when using a lower gear ratio, allows for 2.72 times more torque.

The second generation of the Jeep Liberty was debuted in 2007 and it was similar to the Dodge Nitro in its more ‘boxy' styling. Receiving a complete redesign for this new generation, the Liberty was built on the same platform as the Dodge Nitro. The Liberty was debuted at the 2007 New York International Auto Show. This new version came in two models, the Sport and the Limited, and a 3.7-liter V6 engine with 210 horsepower was the power for both of them.

The Sport had a manual transmission with six gears while an automatic transmission with four gears was optional. Automatic transmission came with the Limited. The Sport version was equipped with 16 inch tires, and a system that can be switched either on or off with the touch of a button, and a stereo system with six speakers and CD player. The Limited model came with 17-inch tires, adjustable driver seats with six different settings and a cruise control system. Both models offered a sunroof, CD player that can store up to six CDs and leather seats as optional. All of the Liberty models were equipped with anti-lock disc brakes and a stability control system.

Since the Patriot and Compass crossover SUVs took its place as Jeep's four-cylinder vehicles, the Liberty dropped its four-cylinder option. The only engine available for 2008 was the iron-block, aluminum-head V6. The '08 Liberty also had a towing capacity of 5,000 lbs. At this time there is no diesel mode for the U.S. Jeep. Because it couldn't meet tougher 2007 emission standards Jeep stopped building the Liberty CRD for the American market. The transmission selections are both carry-overs from previous year, a six-speed manual or a four-speed automatic.

Two models, the Sport and the Limited were offered with wheel choices of 16-, 17- and 18-inches. The Sky Slider is the most innovative feature this year, a power roof constructed of 'reinforced acrylic cloth' that opens over the front and rear seats. With the largest opening in its class, the Sky Slider opens up to 60 inches by 30 inches. Jeep claims the concept behind this innovative design was from trying to maintain the ‘open-air feeling' from previous Jeep models, while still maintaining ‘the rigidity and safety of a sturdy frame'.