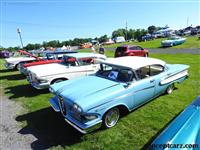 1958 Edsel Ranger
Produced: 19,814
Original Price: $2,485 - $2,645
Average Auction Sale: $9,882
Median Auction Sale: $8,525
Chassis Profiles
A marketing disaster for Ford and for Ford's corporate strategy for meeting GM's product line for product line, the 1958 Edsel was unfortunately not what the public was expecting. The Edsel made its official debut on September 4th 1957 in showrooms spanning the country. Craftful and expensive marketing pre-empted this launch, as the extensive advertising kept everyone whispering and wondering about this mysterious new vehicle.

Keeping potential consumers on the edge of their seats with their tactful and slightly subliminal advertising, ads had begun running months earlier that simply featured a hood ornament or a covered car carrier, with the simple text 'The Edsel is Coming'.
Great lengths were taken to keep the appearance and features of the concealed vehicle a secret until the debut. Dealers were liable to fines or loss of franchise if they revealed the undercover vehicle prior to the release date.

Many critics believe that the car's name was a major part of its downfall. Following extensive surveys, the company even involved Ford staffers for suggestions, before throwing away all of the marketing research, and naming it after Henry and Clara Ford's only child, Edsel Bryant.

The day the vehicle was finally unveiled, consumers assembled in massive numbers at the dealerships. Believing that they would be shown something radically new, they're curiosity was rampant. Edsel's chief designer, Roy Brown Jr. set out to create a one-of-a-kind appearance that would be instantly recognizable for years to come.

Unfortunately, what the public found was really just another 1958 model. Not living up to the hype surrounding it, consumers thronged around the Edsel, but they only came to look. The company had high expectations to sell a minimum of 400 Edsels daily through 1,200 dealers. This goal was not met.

Edsel executives began worrying when early sales proved to be unexpectedly slow. Though the Edsel was set apart from other mid-1950's vehicles with a big impact ring in the middle of the front end, rather than two headlights and a horizontal grille, this alone wasn't enough to boost sales. Criticism came swiftly concerning the new look. Many reviewers considered the new Edsel to be a large gas-guzzling automobile with strange styling.

At this point in the decade, people were looking more and more towards smaller economy vehicles. Consumers were now growing tired of huge big finned vehicles covered in chrome. Edsel aimed incorrectly with their marketing scheme when they assumed this trend was going to continue. Unfortunately, 1958 was one of the worst years for the automobile industry. The only two cars that saw an increase over their 1957 production was the Ford Thunderbird, and the Rambler American.

The time of year that the debut was released also contributed to the problem, as typically, new models came out in November for the next model year, while the launch of the Edsel in September meant that it would reflect 1958 pricing while competing with 1957 models. In comparison, the Edsel looked expensive when compared to the discounted 1957, as dealers tried to clear their lots in anticipation of the new year's models.

A tough sell, especially during a recession year, when put against the end-of-year specials, Edsel chose to push their largest, most luxurious, and most expensive model. This proved to be disastrous, as without an established customer base Edsel sold only 64,000 units during its first year. As the 58 model year drew to a close, the company attempted to promote how inexpensive it was to own a bottom-line 1958 Edesl model, but this attempt proved to be too late.

The Edsel was launched as its own division, and completely separate from Ford. This decision ended up being a very costly and unfortunate choice by Ford. Brand-new dealerships were recruited rather than franchising with Ford/Mercury. Yet, rather than creating separate manufacturing facilities, as there were no plants set up to produce the Edsel, the division was squeezed on the Ford and Mercury assembly lines. This decision was yet another folly, as many of the Ford/Mercury employees resented having to build another division's vehicle.

This led to intentional vandalism, while vehicles would come to the end of the line with missing parts and faulty brakes, and many cars were unsafe for the road. Unfortunately, preceding the Edsel was their reputation for mechanical problems. Occasionally the wrong parts were put on the car, or the part was not available, and would be delivered to the dealership this way. This resulted in the Edsel developing a reputation for mechanical problems.

A list would be found on the steering wheel which would say which parts were missing. Part of the problem was the complex and unfamiliar state-of-the-art-technology of the Edsel with its automatic Tele-touch transmission. Mechanics' were confounded with the complicated system that was earlier than its time. Other design flaws created issues for buyers. The hood ornament became a safety hazard as once the car reached up to 70 mph, the ornament would fly right off.

Sharing its body with the Pacer, the Edsel Ranger was produced by the former Mercury-Edsel-Lincoln Division of the Ford Motor Company located in Dearborn, Michigan. The Ranger was built off the shorter Edsel platform and was sold through the Edsel marque in 1958.

During the first and second years of the Edsel's automobile marque, the Ranger was introduced as the base trim option and was offered in either two or four-door sedans. The base trim included a rear-view mirror, two coat hangers, a cigarette lighter, armrests and black rubber floor mats. Available optional items included a basic heater and air conditioning in 1958.

Differentiating itself from the upmarket Pacer, the Ranger did not have the stainless trim on the front doors and fenders. While two-tone paint was optional, Edsel Rangers showcased chrome around the rear quarter panel cove molding on the exterior. Early on in the model years, a very rare, optional, Ranger only door trim was made available from dealers to be used together with the Pacer fender trim.

The trouble-prone Teletouch transmission featured was dropped in 1959, along with the best-selling Pacer and the premium Citation. The new top-line Corsair and the Ranger shared the 120-inch wheelbase for this model year. The horsecollar grille was replaced by a shield shape filled with rows of bars, as the styling for the Ranger became more conservative. While prices ranged from $2,629 to $2,756 for the 1959 year, body styles remained at 2-door coupes, 4-door sedans, and 2 and 4-door hardtop bodies.

The following year, the Edsel Ranger became the only car that Edsel offered, and the 1960 Ranger was introduced on October 15, 1959. The 1960 model shared such a various arrangement of body panels and interior trim features wth the Corsair, that the decision was made to eliminate both the Corsair, and the vertical grille element. The convertible body style was given to the Ranger, and at this point, the only defining element was its taillights, grille, and name badges. This convertible body style was available only in 1960, though not during 1958 or 1959. The Edsel Villager was a nameplate that was applied to two station wagons, a 6 and a 9-passenger model.

Four days following the introduction of the 1960 model, the Edsel marque was discontinued by Ford, and the final car was rolled off the assembly line by the end of the month. While price ranges for the 1960 model ranged from $2,643 to $3,000, only a total of 2,846 Ranger models were produced for this year.

Edsel Ranger models are considered to be quite collectible to this day, due to the low production volumes during its three years of existence. The 1960 Ranger convertible has been frequently counterfeited over the years.By Jessica Donaldson