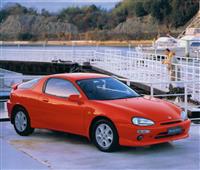 1991 Mazda MX-3
Original Price: $14,445
The Mazda MX-3 was produced from 1991 through 1998 and built atop the EC platform. The car had a sports compact, three-door hatchback configuration with seating for four. Engine options throughout the years include a four-cylinder unit that displaced 1.6-liters and a 1.8-liter V6 which produced 135 horsepower. The four-cylinder SOHC engines produced just under 90 horsepower and used in 1992 and 1993. The 16-valve DOHC four-cylinder unit introduced beginning in 1994, produced 106 horsepower. A five-speed manual gearbox as standard and a four-speed automatic was available for an additional cost.
By Daniel Vaughan | Sep 2007