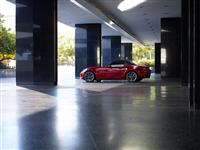 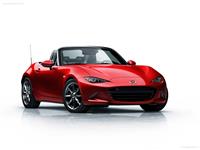 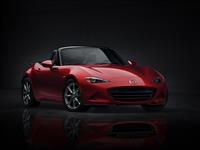 Rumor to be designed after the Lotus Elan, the Mazda Miata is the world's best selling sports car. With over 720,000 produced between 1989 and 2005, production proves Mazda held its title consistently.

The history of the Miata is one of interest and success. Unveiled in 1989 as the 'Eunos Roadser', prior to the name change to the Miata, it was a designed collaboration between the USA and England. Created to be a basic roadster without unnecessary weight, it was an instant success with over 23,000 sold by the end of its first year. With a starting price of $13,800, the Miata, despite its small design, made a sizeable impact in the success of Mazda's future.

The shell of the Miata is all steel with an aluminum bonnet. Weighing in at over 2,380 pounds, the Miata confirmed its small roadster appeal. The trusswork is uniquely called the 'Powerplant Frame', which connects the engine to the differential, creating a more firm and responsive feel. It's quick and responsive handling is helped due to independent double wishbone suspension on all four wheels with an anti-roll bar at the front. Optional paddle shifting was available with the six speed automatic versions of the Touring, Sport, and Grand Touring models. With power to the rear wheels, drivers thirst for corners even if they're beginners.

The Miata's appearance ranks among attractive qualities. Its cozy, subtle, curved design helped to propel sales to customers of all ages to a higher level. The bright color palette offered during production accented the appearance and still turns heads today, making onlookers yearn to get behind the wheel of this convertible on owners pine for the summer months.

The interior, though tight, beckoned stereo enthusiasts and those who revel in the appeal and stigma of leather. Optional passenger-side airbags and standard drivers–side airbags provided safety without drastically impacting the beauty of the interior.

The 1.8L produced 140 horsepower with help of the raised engine compression ratio and the additions of domed pistons. The additions also helped the 0-60 time, which was marked at 7.9 seconds with a top speed of 123 miles per hour. In 2005, the 2.0L was the latest engine thrusting the Miata. The 16 valve engine produced 170 horsepower with a 0-60 time of 6.5 seconds, bringing the Miata to a fast finish when production ceased in the same year.