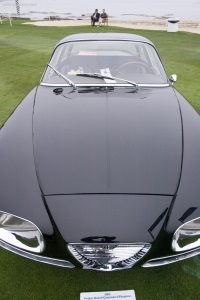 For the Spider and Sprint models, a 2584 cc straight six-cylinder, alloy dual overhead cam engine with triple carburetors was capable of producing 145 horsepower. The Berlina models had 130 horsepower. Placed in the front and powering the rear wheels, it could propel from zero to sixty in 10.4 seconds and had a top speed of 125 mph. Disc brakes were placed on the front and drum brakes were in the rear. A five-speed manual gearbox was standard.

The Sprint series continued in production until 1966. Production of the 2600 continued until 1969. During its lifespan, 105 Sprint Zagatos, 54 De Luxe, 2,038 Berlina, 2,255 Spider, and 6,999 Sprint models were produced.
By Daniel Vaughan | Sep 2007Debuting at the 1962 Geneva Motor Show, the classic 2600 series was introduced by Alfa Romeo. Replacing the popular 2000 series, the 2600 range was offered as a two-door Sprint coupe, a four-door Berlina sedan, and an open Touring two-door Spider. Sprints were designed by Bertone and constructed by OSI, Spiders were designed and built by Touring of Milan, and Berlinas were designed and built in-house by Alfa. Also called the Series 106, the 2600 Series was Alfa Romeo's six-cylinder flagship and was produced from 1961 through 1968.

A departure from the iron-block four-cylinders, which had been an industry standard with post-war Alfas, the 2600 used a new 2,584 cc aluminum inline-six-cylinder engine with cast-iron liners, a cross-flow head, and hemispherical combustion chambers. The engine inside the Berlina was fitted with two Solex carburetors that produced 130 hp. The Sprints and Spiders featured three twin-choke horizontal carburetors and pumped out 145 hp. The Berlinas engine was mated to a column-shift manual while Sprints and Spiders featured a five-speed synchromesh floor unit. The OSI De Luxe was offered with the two-carb or the three-carb setup.

The Sprint and the Spider had a top speed of 124 mph, with the Berlina coming in slightly lower at 112 mph. Discs were eventually made standard all around, but early on the 2600 models had front Girling disc brakes and rear drums. The suspension came from front double A-arms with coil springs and a sway bar, along with a solid rear axle with longitudinal radius arms and coil springs.

The Sprint, Berlina, and Spider were based on corresponding models in the 2000 range and all three models retained the previous body styles but with minor renovations.
In the marque's history, Romeo Berlinas normally outsold most specialized sporting models from the same range, but in this instance, the 2600 Berlina didn't outsell the 2600 Sprint and Spider. Many considered the Berlinas styling to not be very appealing and especially poor sales reflected this.

The styling of the Spider seemed to have been inspired by the Giulietta Spider, and though attractive enough, was not enough to win the hearts of the current automotive market. The Spider was constructed of steel instead of the standard aluminum and was technically considered a 2+2 roadster though the rear left much to be desired for an adult passenger.

The Sprint offered available leather seating, two-speed wipers, electric windows, and a rear demister. The Sprint was met with much more favorable appeal than the other two models. A large grand touring coupe, there was plenty of room for four adults to comfortably enjoy a long road trip. The Sprint became the best seller of the 2600 range, possibly due to its fresh, modern styling and smooth handling. The design of the Sprint was Giorgetto Giugiaro's first large project as head designer for Carrozeria Bertone and considered by many to be a great success.

Numerous 2600 Sprint models were bought by the Italian government and modified and specially equipped to be used as Police and Carabinieri patrol vehicles. These models were nicknamed 'Pantera' (panther) and 'Gazzella' (gazelle) and their speed made them a veritable force to be reckoned with when chasing offenders.

Though Alfa had expected much higher numbers, especially due to the excellent engine, the total production of the Sprint was around 6,999 cars and a total of 2,255 Spider models. Though the 2600 had plenty of power, the six-cylinder was heavy and cumbersome over the front wheels, which took away from the handling. Many didn't consider this range to be as sleek or elegant as previous Alfa models and sales were reflected accordingly. Poor sales could also be chalked up to higher prices for the 2600 models compared to other Alfa cars. Since the 2600 was basically a minor facelift from the 2000 range with a new engine, and the 2000 was a 1958 restyling of the 1950 1900, the 2600 was considered dated. Once the new Giulia appeared on the scene with brand new running gear, the 2600 was sadly forgotten.

In 1968 the much more sophisticated 1750 replaced the 2600 range. The 2600 Sprint and Spider are considered by many today to be a worthy classic collectible. In comparison to other more successful Alfa Romeo models of the same era, the 2600's are quite rare. Owners need to carefully research their parts since they are either dedicated to the 2600 range or derive from even earlier Alfa models. Only 105 2600 SZ's were ever created and as such are extremely rare and are designated the most valuable model in the range. Very few of the 2600 Berlinas have survived since the discontinuation of the model.