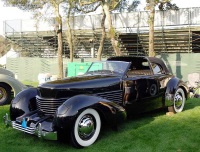 The Cord was owned by Auburn, Cord, and Duesenberg. Thus their similarities in vehicle design. These three firms also owned the Lycoming engine manufacturing company. This company supplied the 289 cubic-inch V8 engine that gave this vehicle life. The engine was rated at 125 horsepower, with the supercharger the horsepower increased to 170 bhp. The 125hp engine was capable of 90 miles-per-hour with a zero-to-sixty rating of about 20 seconds. A four-speed pre-selector was used, and the wheels were fitted with drum brakes.
The Gordon Beuhrig design is very classic, clean and inspired by aviation. The hood was called the 'Coffin Nose' look for obvious reasons. The hood, when opened, would open upwards. The windshield was split in the middle and was small in comparison to other vehicles. This was due to the room needed by the massive V8. The front had a chrome bumper and a wrap-around grill. Two lights were attached to the bumper and two retractable lights were hidden in the front wheel covers.

Production began for the Cords in 1936 and sales were steady. However, the company itself was not doing as well. The industry was very tough during that era due to many obstacles such as competition.

In 1937 the car was renamed to the 812 and included a few modifications. The 812S were supercharged and had chromed exhaust pipes attached to the side. It was too little, too late. Production ceased later that year due to company financial problems.
By Daniel Vaughan | Mar 2006
Cord Models
810/812
L-29