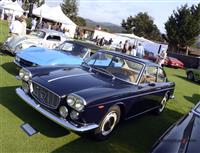 The Lancia Flavia was produced from 1961 through 1975 with a total of 105,848 examples produced. The design was courtesy of Professor Fessia and initially offered only as a four door saloon. Mounted in the engine bay was an aluminum boxer engine that displaced 1.5-liters. Power was sent to the front wheels with Dunlop discs being placed on all four corners. The saloon was soon joined by a Pininfarina designed coupe sitting on a shortened wheelbase. Other coachbuilders were soon creating their own interpretation of the Flavia, including Vignale who produced a two door convertible, and Zagato created a two-door sports version constructed of lightweight design principles. The Vignale and Zagato versions would continued until Fiat took control of the company in the late 1960s and these two were discontinued. At which time, the coupe and saloon versions were given new bodywork.

In the early 1970s, the Flavia was redesigned and renamed to the Lancia 2000. This version featured Girling disc brakes which replaced the Dunlop version. The fuel injected version of the engine used a Bosch D-jetronic Analog-electrovalve fuel injection system.