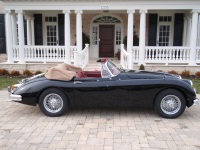 1958 Jaguar XK150
Original Price: $4,475 - $5,120
Average Auction Sale: $93,103
Median Auction Sale: $82,036
Chassis Profiles
Total Production: 7,929
In 1957 Jaguar introduced the XK150, a replacement for the XK140. The XK140 had been a replacement for the XK120 which had started the XK series with its elegant styling and impressive 120 mph capabilities. At the time, the XK120 was the fastest production vehicle in the world. The XK150 had many similarities to its predecessors but it featured modern styling and improved mechanics.
When the XK150 was introduced, it could be purchased in DropHead Coupe or FixedHead Coupe configuration. The Open Two Seater (OTS) Roadster version appeared a year later.

1954 Jaguar XK140
Original Price: $3,450
Average Auction Sale: $106,141
Median Auction Sale: $97,625
Chassis Profiles
Total Production: 8,884
In 1954, Jaguar introduced the XK140 as a replacement for the highly successful Jaguar XK120 that had first appeared in 1948. The XK Series was conceived by William Lyons as a sleek automobile that sat atop a short wheelbase in two-seat roadster configuration powered by a twin-cam engine. The XK120, named because of its 120 mph top speed, was powered by an engine that produced 160 horsepower. The 'X' represented the 'experimental' engine type while the letter 'K' was the sequence. The XK140 received a larger 190 horsepower engine, rack-and-pinion steering, and more interior space. Interior space was gained by the repositioning of the engine and firewall, thus keeping the dimensions of the chassis identical to the XK120. Minor improvements were done to the aesthetics of the vehicle. A Special Equipment package was available that included Dayton wire wheels and a 210 horsepower engine, the result of C-Type heads, and dual exhaust.

1949 Jaguar XK120
Original Price: $3,950
Chassis Profiles
Total Production: 12,078
The Jaguar XK120 was designed to be a prestigious vehicle and produced in low numbers. The designation '120' represented the vehicle's top speed of 120 miles-per-hour. At the time, it was the fastest production car in the world.

The British automotive industry was greatly influenced by World War II. Many manufacturers went out of business due to the lack of funds, fuel and supply shortages, or their factories had been destroyed during the war. In order to stay in business, a solid production line was required that could compete with its class of vehicles. William Lyons, the owner of Jaguar, did so by creating a new class - one that was faster, more reliable, stylish, and cheaper than any other vehicle on the market.