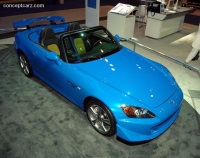 1999 Honda S2000
Original Price: $30,000
Unveiled first as a concept (The SSM) at the Tokyo Motor Show in 1995, the Honda S2000 is a roadster manufactured by the Honda Motor Company. 'SSM' stood for 'Sports Study Model' and was a rear wheel drive roadster that was powered by a 2.0 L inline 4-cylinder engine. The concept featured a push-button starter and central division between the passenger and driver. (Honda claimed that this feature improved the vehicle's rigidity.) The concept featured a 50/50 weight distribution and all of the body panels were aluminum. For the next several automotive shows, the SSM appeared unchanged and hinted at the eventual production vehicle to be produced. Later, Honda made the announcement that a production version of the SSM would be introduced.

The S2000 was launched in April 1999 in world markets to celebrate Honda's 50th Anniversary. The name was chosen for its engine displacement of 2 L and carried on in the tradition of the S500, S600 and S800 roadsters of the ‘60's.

Featuring a wedge-shaped profile that sets it apart from all other roadsters, the Honda S2000 is a high-performance two-seat roadster. Feeling more like a racecar than just an average sports car, the S200 is a rear-wheel-drive sports vehicle with a high-revving four-cylinder engine. The S2000 measures 162.6 inches long and rides on a 94-5-inch wheelbase. The fancy power-operated top contains a glass rear window with a defroster. The S2000 also came standard with a molded top cover though a body-colored hardtop is available. Through the car's lifetime, the S2000 received several revisions that included changes to the engine, gearbox, suspension and interior and exterior.

Two model designations of the S2000 officially exist. The initial launch model was dubbed the AP1 and the AP2 name was given to the models produced from 2004 on and contained substantial revisions to both the suspension and drive-train.

The AP1 was introduced in 1999 until 2004 and was assembled in Takanezawa R&D Plant in Tochigi, Japan. This first model featured a 6-speed manual transmission, an overall length of 162.2 inch, a width of 68,9 inches and a height of 50.0 inches. The engine was a 1,997 cu F20C I4 and it rode on a 94.5-inch wheelbase. The AP1 featured front-mid-engine, and rear wheel drive layout with power that was delivered by a 1,997 cc (122 cu in) F20C inline 4-cylinder DOHC-VTEX engine that produced 240 hp at 8,300 rpm and had 153 ft/lb of torque at 7,500 rpm. European versions were rated at a slightly lower rate of 237 hp while Japanese models were rated at 247 hp at 8,6000 rpm. The engine was joined to a six-speed manual transmission and Torsen limited slip differential. The S2000 was capable of achieving the highest specific power per unit volume of any mass-produced naturally-aspirated automobile piston engine due to its high-revving nature for a car engine and produced 123.5 hp per liter.

Constructed using a rigid X-bone monocoque frame, the roadster had a very high level of safety and handling. Other features that the AP1 came with were independent double wishbone suspension, integrated roll hoops and electrically-assisted steering. Standard on the AP1 was 16-inch wheels with Bridgestone Potenza S-02 tires, and the engine was both compact and lightweight and was mounted entirely behind the front axle. Standard was an electrically powered vinyl top with internal cloth lining, and an OEM hardtop was available for an additional expense.

For the 2001 model year, the S2000 was basically unchanged though the radio was upgraded to include a clock. The following year the suspension settings were updated and the plastic rear windows were replaced with glass and an electric defroster was introduced. Others revisions for this year included updated tail lamps, a revised engine control unit and an upgraded radio. Production of the AP1 continued until 2004 when production was shifted to the Suzuka plant in Suxuka, Mie, Japan and the AP2 took over.

The chassis designation of AP2 was given to the S2000 in the 2004 model year and this lasted until 2009. The AP2 measured an overall length of 162.2 inches, had a width of 68.9 inches and had a height of 50.0 inches. The wheelbase was measured at 94.5 inches and featured 17-inch wheels and Bridgestone RE-050 tires along with a retuned suspension that reduced the vehicle's ‘tendency to over-steer'. The suspension geometry was modified in the AP2 to improve stability by reducing toe-in changes under comering loads, and the spring rates and shock absorber damping was also altered.

The AP2 also received changes to the exterior as well upon its introduction. All new front and rear bumpers were showcased, along with revised headlight assemblies, oval-tipped exhausts and new LED tail-lights. A larger version of the F20C was introduced for the North American market only, dubbed the F22C1, the engine's stroke was lengthened and the displacement was increased to 2,157 cc. The redline was reduced from 9,000 rpm to 8,000 rpm while peak torque increased 6% to 162 ft/lb at 6,2000 rpm. Though power output was the same, Honda quoted that the F22C1 had more torque at lower rpm than the F20C. The F20C was used in all other markets, while the F22C1 was used exclusively in the North American market for '04 and '05. Honda also changed the transmission gear ratios by shortening the first four gears and lengthening the last two. To improve drive-train longevity by reducing shock loads, the inclusion of a clutch release delay valve with introduced.

For 2006 the S2000 now came with a drive by wire throttle, Vehicle Stability Assist system, one new exterior color (Laguna Blue Pearl) and new wheels. Inside the S2000 received updated seats, additional headrest padding where previously had been helmet depressions and screens, and additional stereo speakers integrated into the headrest. The F22C1 engine finally made it over to the Japanese market and replaced the F20C with a very specified power output of 239 hp.

The only changes that the S2000 received for '08 was a new wheel design, an altered gauge layout and suspension tweaks. This was the first time that the S2000 was available in more than one trim level. The S2000's main competition was other two-seat roadsters, the Pontiac Solstice GXP, Audi TT and the BMW Z4.

The S2000 CR made its world debut at the '07 New York International Auto Show on April 4th, 2007('CR' stands for 'club racer') and came with an all-new track-ready package. The CR had an even more enhanced racecar feeling with its specially tuned suspension, additional chassis bracing and a removable hardtop that increased chassis rigidity. Though they can be added, CR models didn't come with normal comfort features such as AC and radio, to save weight, they also came with a standard hardtop instead of the retractable soft-top. Featuring functional aerodynamic front and rear spoilers that increased down-force and improved road-hugging at high speeds, the S2000 CR weighed 51 lbs less than the regular S2000 with the hardtop on, and an incredible 99 lbs lighter with the hardtop removed. Also to reduce the weight even more and affect a lower center of gravity, the spare tire was removed.

The CR was dubbed the Type-S in Japan and included a quicker steering rack, stiffer suspension and all-new more-aggressive Bridgestone Potenza RE070 tires. The CR received widened rear tires from 245/40R-17 to 255/40R-17. Wind-tunnel tested and claiming to reduce the overall coefficient of lift by 70-80% the CR received an updated body kit that was composed of a redesigned front clip, rear bumper and a large spoiler. Prices of the Honda S2000 CR started at $36,300 and it went on sale in the fall of 2007.

Honda officially announced its plans to continue both trim levels of the S2000 unchanged for the 2009 model year. The MSRP was bumped up to $34,695 for the base trim and $36,695 for the CR trim. At the end of the 2009 model year, production will cease for the S2000.By Jessica Donaldson
Honda Models
600
Accord
Civic
CR-V
CR-Z
CRX
Element
FCX Clarity
Fit
HR-V
Insight
Odyssey
Passport
Pilot
Prelude
Ridgeline
S2000
S800