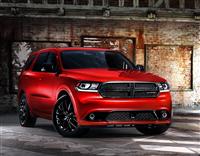 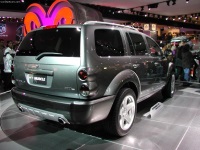 Dodge's most beloved sport utility vehicle, the Durango has been in production since 1998 and its popularity lies in its ability to continuously adapt to the ever-changing customer needs and desires over the years. Produced by the Dodge division of Chrysler, the first generation of the Durango was based on the Dodge Dakota and featured a study, midsized SUV body-on-frame construction. Produced at the Newark Assembly plant in Newark, Delaware, the Dakota was classified as a mid-size SUV at first, before growing into a full-size SUV for the second generation. During its first year the Durango was only available in a four-wheel-drive version. Both 2WD and 4WD drivetrains were available in 1999, along with a full range of V6 and V8 engines.

Riding on a 116.2-inch wheelbase, the Durango had a length of 193.5 inches, a width of 71.5 inches, a height of 70.0 inches and had a curb weight of 4,500 pounds. Advertised as a sturdy truck with room for up to seven passengers, the Durango had the capability to tow up to 8,950 pounds when properly equipped. Though few were actually sold, Dodge offered a 3.9L Magnum V6 engine.

For its second year of production only minor updates were made including two new paint colors. Also new this year was 6 in x 9 in heated rear view mirrors and steering wheel-mounted radio controls. SLT Plus models received leather seats as standard while body-color wheel flares were made standard on 4WD Models and SLT Plus. In 2000 the 4.7 L PowerTech V8 engine replaced the 5.2 L Magnum V8 though the 5.2 would remain available in the early 2000 models. Leaving only V8s for the rest of the production run, the 3.9L Magnum V6 engine wasn't available any longer. The high performance R/T was introduced this year. A special AWD performance version, the R/T was powered by a powerful performance tuned 5.9 L Magnum V8.

An exclusive limited edition Shelby S.P.360 version was offered in 1999 and 2000 that featured a supercharged version of the 5.9 L Magnum V8 engine. Available output for the Shelby was 360 hp and 412 lb./ft. of torque. The Shelby sported special wheels, bumpers, tires and suspension and came standard painted Viper blue paint with two racing stripes down the center of the truck. With a top speed of 142 mph, the Shelby could achieve 0-60mph in just 7.1 seconds.

In 2001 Dodge focused its attention on the interior of the SUV and gave special attention to the interior trim panels, instrument panel, dash mounted controls, overhead console and a newly redesigned steering wheel. 4X4 models received a new switch on the dash for the transfer case selector instead of a manual lever on the console. A new message center was added to the modified instrument cluster. Standard equipment now included a comfy dual-zone climate control system. All models now came with standard SX speakers and improved premium sound systems. Slight updates were made to trim options and other changes included revised seats, updated door panels and aluminum wheels.

The second-generation Durango was launched in 2004 and was originally shown as a concept named Durango R/T concept at the 2003 Detroit Auto Show. Sporting a fully boxed frame like its Dakota sibling, the new Durango had a lot in common with the large Dodge Ram pickup. Growing in size the second-generation model was 7 inches longer, 2 inches wider, and 3 inches taller than its predecessor. This new model had room for eight passengers now and offered a third row bench with three seats and was now officially into the full-sized SUV category.

Offering a more luxurious ride, the new Durango featured a redesigned suspension with rear coil springs. Much of the styling cues of this generation were taken from the Dodge Powerbox concept, which was based heavily on the 1999 Dodge Power Wagon Concept, and the '03 Durango R/T concept. In 2004 the Durango received a solid rear axle and a new coil-spring rear suspension. Mated to the rear axle was a Watt linkage system that centered the axle and reduced rear-end skate over rugged surfaces, which resulted in a wider and lower cargo floor.

In the spring of 2006 in April the 2007 Durango was debuted at the Dallas Auto Show. Sporting an extremely attractive restyle in an attempt to boost sales, the SUV featured a new grille, hood, headlamps, wheels and fenders. New Durango equipment included rear park assist, a one-touch turn signal, electronic stability control and a tire pressure monitoring system. In 2009 a two-mode hybrid version was offered for a short time.

In 2007 Chrysler launched a full-size, luxury SUV called the Chrysler Aspen, first unveiled at the 2006 North American International Auto Show. Based on the Dodge Durango SUV, the Aspen was the first production hybrid offering from Chrysler. Previously the Aspen name had been used by Dodge from 1976 through 1980 on a twin of the Plymouth Volaré. Equipped with three rows of seating for up to eight passengers, the Aspen was available with all-wheel drive. The first truck-based Sport Utility Vehicle commercialized under the Chrysler brand, the Chrysler Aspen was produced only until the end of 2008.

For the 2009 model year Chrysler began producing their first production hybrid vehicles, the Dodge Durango and Chrysler Aspen Hybrids on August 22, 2008. With a MSRP of $45,340, the 2009 Dodge Durango Hybrid had an almost 25% gain in overall duel economy and an almost 40% gain in the city. Along with the Chrysler Aspen Hybrid (starting MSRP $45,570) the Durango Hybrid were rated with the Hemi V8 engine mileage to be around 20 mpg city and 22 mph highway for 2009. The Hybrids featured the 340 hp Hemi engine with MDS along with the new Two-Mode Hybrid system developed with GM and BMW. Non-Hybrid models were rated at 13-mpg city and 19 mph highway. Early in October the Hybrid models were available for sale at dealerships, the same month that Chrysler announced the end of Durango and Aspen production. The Hybrid SUV became one of the shortest-lived models from a major automaker.

Demand for the full-size SUV waned and in October of 2008 Chrysler decided to close the Newark Assembly facility. The facility had previously produced the Durango and Chrysler Aspen, which would end production for the 2009 model year. On December 19, 2008 production ceased.

Dodge released an Internet teaser of first images in August of 2010 to incite interest for the third generation of the Durango. In December of the same year the Durango was put into production based on an all-new, computer-designed unitized platform, built alongside the 2011 Jeep Grand Cherokee in Detroit, Michigan. Not classified as a full-size SUV the new Durango shares the same powertrains, chassis parts and running gear with the Grand Cherokee.

Powering the third generation was the choice of two world-class engines; the 3.6-liter Pentastar V6 or the 5.7-liter HEMI V8 with 360 hp. The base 3.6-liter engine produced 290 hp and 260 lb/ft of torque at 4,800 rpm. The Pentastar option was mated to the Mercedes W5A80 five-speed automatic with Chrysler's controls and the driver-interactive control. Featuring the 545RFE 5-speed automatic, the 5.7 L Hemi VVT V8 engine continued with 360 hp and 390 lb/ft of torque along with a 'fuel-saver' mode that was generally used when cruising at constant speeds on level ground.

The third generation SUV grew to a longer length than the Grand Cherokee and had room for three rows of seating compared to the two rows in the Grand Cherokee. On December 14, 2010 the 2011 Durango entered production alongside its sibling, the second generation Charger. Halfway through January 2011 it went on sale for general dealership availability. Motorweek gave the 2012 Durango the Drivers' Choice Award and the IIHS ranked the 2012 Durango as a 'Top Safety Pick'.

The brand new Durango for 2014 was debuted at the 2013 New York Auto Show. Sportier a design reminiscent of the Rallye with a blackened plastic bumper and outline, the new Durango featured modern sporty lines. Drawing inspiration from the new Dodge Charger the '14 Durango featured a similar LED taillight cluster. The interior of the new SUV featured a new steering wheel with paddle shifters. According to Chrysler there will be an estimated 9% increase in fuel efficiency thanks to the 3.6L V6 and optional Hemi V8 mated with the new Chrysler 8-speed automatic transmission.