The MK II was based on the MKI, but the result was different in many ways, both aesthetically and mechanically. Improvements to the design and modern materials resulted in a reduction of overall weight. The interior was completely redesigned but retained its luxury and elegance with such amenities as leather and wood veneer. The attention to detail both inside and out, only amplified the ambiance of sophistication. Leather seats continued to be standard until 1967 when Jaguar offered it as optional in an effort to reduce the cost of the vehicle.

Under the hood was an XK engine, the same that had won at LeMans in 1951 and 1953. The XK engine was now enlarged to 3.8 liters producing around 220 horsepower. The engine continued to prove itself as a reliable and capable power plant.
By Daniel Vaughan | Mar 2006 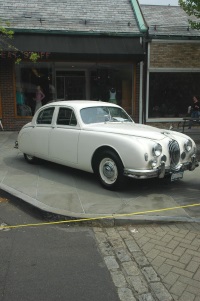 1956 Jaguar MK1
Average Auction Sale: $20,996
Median Auction Sale: $21,263
Chassis Profiles
Total Production: 36,740
Jaguar reached a point during the mid-1950's were they were only selling luxury and sports vehicles along with a great deal of its production happening in foreign markets. The main two reasons for this were that Jaguar sold into market segments easily affected by a recession and there was too much dependence on foreign sales which could be closed at any moment at the whim of a foreign government.

Wanting to move away from this stereotype, and produce a vehicle that could sell into a larger market, as well as sell strongly in the home market. The vehicle not intended as a mainstream family car, but more a vehicle that could be aspired to by the ordinary motorist. In the mid 1950's, this was a segment remarkably devoid of competition. Jaguar introduced the 2.4-liter MKI at the 1955 Motor Show. The MKI was meant to cement a stronger position by producing a vehicle that could be sold at home and to a larger market. The Coventry Company added its first unitary-built vehicle, the new compact 2.4-liter saloon, known as the Mk1.

Originally, the Mk1 resembled a customized Mk2, a bit more menacing with filled in rear wheel arches and glass areas. New for Jaguar, the MKI was built of monocoque construction, immensely over-engineered. The newest model was designed to fill their product gap and appeal to the home market. Though the Jaguar Mk1 was an all-new design, it bore a striking family likeness to both of the other ranges, the front end styling of the XK, and a rear section very similar to the MK VII.

In comparison, the Mk2 was a much more capable car, due to its widened rear wheel track, but the Mk1 was both cheaper and more distinctive. Without the Mk1 there would have been no Mk2.

Several have suspected that Jaguar intended to resurrect a variant of the 2-liter 4-cylinder engine that was to have powered the XK100 if it had ever been marketed. In the end, a new 2.4-liter version of the XK 6-cylinder engine was developed by shortening the stroke and the height of the standard 3.4-liter engine.

While the 3.4 variant was probably produced for the U.S. market, the 2.4 would have viewed as underpowered. Soon becoming very popular in the home market, production figured told the tale of how well it did at home as well as abroad. In 1957 when the 3.4 liter was first produced, the disc brakes were not ready for production, so instead the early models were equipped with servo-assisted drums. Later, conversion kits were made available for owners to upgrade their brakes on both 2.4 and 3.4-liter models. The 3.4 liter was equipped with the engine from the XK140/150 and was capable of producing 210 bhp when fitted with the B cylinder head and SU carburetors.

The 3.4 liter was fitted with a larger grille, as cooling had to be increased, the grille was similar o the one on the concurrent XK150. This became standard on 2.4 liter soon after to rationalize production. The fitment of cut-away rear wheel spats was the other main distinguishing external features; this was so that wire wheels could be fitted and cooling to the marginal drum brakes increased. This was soon fitted to the 2.4 variant as well.