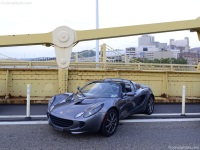 2000 Lotus Elise
Average Auction Sale: $21,096
Median Auction Sale: $21,096
Lotus, manufacturer of some of the world's greatest sports cars, has unveiled its highest-performance Elise model yet, the 1.8 litre 111R, equipped with a high-tech engine that allows it to sprint 0-60mph in a supercar-thrashing 4.9 seconds. Top speed is a certified 150mph.

The hand-assembled Elise 111R is the latest result of Lotus' work to offer a combination of award-winning design, power and accessibility for those looking to own a higher performance Lotus Elise as their everyday car.

In town, the new 111R is compact and powerful enough to dart in and out of traffic, whilst the soft-top and Blaupunkt sound system make it perfect for those hood down, music up cruises through the city. Out of town the 111R's race-bred pedigree comes into its own, with a steering and suspension set up that allows the driver to hug corners before punching out on to the straight.

To balance out the extra power under the bonnet, Lotus has developed an improved braking system. For the first time, track-tuned servo-assisted ABS brakes come as standard on a Lotus Elise, to make stopping the 111R as easy as accelerating.


Ansar Ali, general manager, Lotus Cars Ltd, said: 'The 111R is a car for those who demand the style and innovation of the Elise but want increased performance. Without doubt, the new engine and set-up deliver unrivalled handling and power in its class. With the 111R we hope we've delivered our most exciting, truest and addictive drive yet.'

As standard, the 111R comes with eight spoke alloys, half leather interior and central locking. Buyers can opt for the Touring Pack that includes a sound and thermal insulated soft-top, full leather trim and a DAB radio. Other options include air conditioning and hard top.

The Lotus Elise is a true sportscar that has taken the world by storm, winning countless awards for handling, innovation and just pure fun. The Elise was first unveiled at the Frankfurt Motorshow in 1995 before entering production with first deliveries in August 1996. Since then, over 17,000 Elises have been built – some achievement for a car that was originally designed to be built in volumes of only 700 a year! The Elise was designed as a sportscar to be appreciated by real driving enthusiasts, fashion leaders and those who really appreciate technology and innovation.

The Lotus Elise introduced a range of technologies that revolutionised the automotive industry; such as a chassis made from extruded and bonded aluminium, a composite energy absorbing front crash structure and light weight composite body panels. The whole car weighed in at half the weight of an average family saloon. This light weight bestowed the car with phenomenal acceleration and handling. In 1996 the Lotus Elise was easily pulling 1g in steady state cornering with standard production tyres and a 0-100km/h (0-62mph) in 5.9 seconds.

In 2000 Lotus introduced the second generation Elise. This evolutionary car, arguably one of the most important cars in Lotus' fifty-two year history, added to the technology introduced on the Elise in 1996. It was a big stride forward, achieving the quality standards expected of a world leading sportscar manufacturer and globally respected engineering consultancy. This Elise introduced industry standard quality, much of it based upon the learning gained from working with Lotus' global motor industry partners.

All Lotus Elises are hand assembled by skilled craftsmen at Lotus' headquarters in Hethel, England. Each Elise takes about 100 man-hours to build and the final product is fine testament to the skills of Lotus.

As soon as a driver sits behind the wheel of a Lotus, they instantly know that they are in something special. From the composite sports seats that hug the driver under the g-forces that are experienced on cornering, acceleration and braking, to the race designed steering wheel and the extruded aluminium pedals perfectly suited to both cruising as well as hard driving - the Elise is a car that invites to be driven.

The twin instrumentation dials show road speed and engine speed (for the 111R, now showing to 10,000rpm) and are updated for 2004 across the whole of the Elise range, with clearer graphics and orange back lighting which is proven to be easier on the eye. Links between the Elise and the track have always been strong, and the ambience of the facia and trim with the chassis tub sides provoke a strong sense of being seated in a racing derived but comfortable cockpit.

A four speaker Blaupunkt stereo system with CD player is provided as standard along with a radio receiver wiring loom including dipole aerial kit located in the front of the Elise 111R.

During the early days of the original Elise development programme, Lotus searched for an appropriate and available chassis technology for its new lightweight sportscar. Unable to find a suitable technology, and unwilling to compromise, Lotus set out to change the rules. Lotus engineers looked outside the automotive industry and brought together aluminium extrusions and modern aerospace bonding techniques to produce a lightweight and exceptionally rigid structure.

The structure is an assembly of individually extruded lengths bonded together by epoxy resin adhesive, a world first in automobile manufacture. The adhesive used to bond the Lotus chassis achieves exceptional strength with the ability to absorb the most extreme loads, pressures and forces that it may encounter. Never before had a modern vehicle's chassis been bonded together.

The bonding of lap joints provides a superior joint to traditionally welded butted joints (with bonded joints, there is no distortion of the material's integrity at the join). Self-pierce rivets further increase the structural integrity through reducing material ‘peel' in the most severe of impacts.

The chassis received modifications in 2000, including lower, reinforced longitudinal sills to improve the access into the cockpit.

Now with the introduction of the VVTL-i power unit, further enhancements have been made to the rear of the chassis structure. Utilising experience gained from the development of advanced lightweight steel, a new highly efficient rear subframe offers increased strength. In keeping with Lotus' philosophy, this structure is an elegant integrated single solution for the engine cradle and improved suspension and exhaust silencer mounting points.

Ride and handling that sets the benchmark…

The aluminium chassis allows vehicle dynamics engineers at Lotus to continue to set standards by which all other sportscars are judged. Indeed, the Elise continues to build on the multi-award winning ride and handling for which it has become renowned the world over.

Lotus has taken a no-compromise approach in carrying over these philosophies to the Elise 111R. The development team has succeeded in creating a car that leaves the driver craving more time in the cockpit and more road on which to enjoy the thrill and engagement of each journey.

Run in parallel to Lotus' USA (Federal) Elise programme, the 111R faced a gruelling development programme exceeding 500,000 miles throughout 2003 that took the car across Europe and the USA. This has resulted in an exciting and progressive ride and handling package that integrates the constituents that make up the dynamics characteristics, tuning them to work in harmony with each other, the driver and the road.

For the Elise 111R, the Eibach coaxial coil springs and Bilstein high pressure monotube gas dampers have been retuned and optimised to maintain the Elise's trademark agility, body control and poise while improving the isolation of both smaller and larger impacts.

The unique Bridgestone Potenza RE040 tyres (175/55R16 front and 225/45R17 rear) have been carried over from the Lotus Elise and the Elise 111S. The Lotus Ride and Handling team have maximised the ability to hone the chassis and tyre characteristics to ensure that this latest and highest performing version of the Elise holds true to Lotus' values of peerless ride and handling and pure driving fun.

However, Lotus has specifically tuned the initiation point to allow a skilled driver to maximise the potential of the braking system through the utilisation of forward weight transfer. In the event of the driver demanding more braking performance than is possible, only then does the system intervene to optimise the force generated at the wheel.

Lotus undertook a thorough and exhaustive evaluation of a wide range of state-of-the-art engines. Toyota's 2ZZ-GE 1.8 litre 4 cylinder 16-valve VVTL-i engine and C64 six-speed gearbox was chosen as an outstanding package, excellently suited to the Elise.

This engine has breath taking power and torque characteristics, and critically for a Lotus, is lightweight, featuring a compact metal matrix composite alloy cylinder block.

A bespoke exhaust system has been developed for the Elise 111R with the twin exhaust pipes exiting through the rear diffuser.

Lotus subjected the 2ZZ-GE to a rigorous testing and development programme covering a wide range of extreme climate conditions from the Arctic Circle to the Arizona and Nevada deserts, and at altitude in Colorado. Furthermore, the engine management system, bifurcated exhaust downpipe, and bespoke gearshift mechanism are designed and developed by Lotus, resulting in a power unit perfectly integrated with the Elise's chassis and dynamics.

Lotus has tuned the engine to suit the very essence of the Elise by employing a brand new, custom-engineered Lotus T4 engine management system (EMS). The software for the EMS was designed and developed by Lotus specifically for the Elise 111R. All calibration and validation work was undertaken solely by Lotus engineers, ensuring that the Elise performs as a true Lotus should.

Toyota's world-renowned VVTL-i system allows the engine management system the flexibility to select the optimum camshaft profile, lift and timing across the full range of engine operating conditions. This interaction between the Lotus T4 EMS and the VVTL-i system gives the Elise its optimum linear torque characteristics, peaking at 181Nm (133.5 lb.ft) @ 6800rpm coupled with the peak power of 192 PS (189hp, 141kW) at 7800rpm.

The all-aluminium lightweight Toyota C64 six-speed gearbox is fitted with an all-new Lotus designed and developed shift operating mechanism. With the closest ratios and gearset afforded by the transmission, the gearbox offers a fast, precise and light gearshift, ensuring drivers have total control and flexibility to apply the power exactly as and when required.

True to Colin Chapman's philosophy of performance through lightweight, the power density available from the Toyota power unit gives the Elise a staggering 223PS/tonne (220hp/tonne, 164kW/tonne) and a 0-100km/h sprint in 5.2 seconds (0-60mph in 4.9 seconds)!

Proof, if needed, that there actually is a substitute for 'cubic inches'!

Optional equipment includes a Touring Pack, which provides a combination of options designed to increase comfort and convenience, while still maintaining the essence of a Lotus sports car. This pack includes: